US Growth Seen Outpacing China’s for First Time Since 1976

China’s coronavirus lockdowns mean its economic growth may undershoot the US for the first time since 1976, in a role reversal with potential political reverberations in both Beijing and Washington.

While Beijing is applying fiscal, monetary and regulatory stimulus measures, the impact is being blunted by President Xi Jinping’s Covid Zero policy, which requires strict curbs on activity when virus outbreaks occur. The US, while struggling to cope with high inflation, is still being propelled by strong hiring and consumer spending.

The Bloomberg Economics call is on the bearish end of the spectrum, with the median forecast for China’s 2022 GDP growth still over 4%. If they have it right, this year would be the first time that China’s full-year growth pace has lagged behind that of its rival since 1976, when China was emerging from the tumultuous decade of the Cultural Revolution, World Bank data show.

Since the “reform and opening up” campaign launched in the late 1970s, China has enjoyed faster expansion rates, with plenty of scope still remaining for its per-capita GDP to narrow the gap with the US.

President Joe Biden, who is urging congressional lawmakers to pass a package of legislation aimed at strengthening US competitiveness against China, would be sure to seize on such a relative growth outcome. He has framed his economic agenda in part around demonstrating whether democracies can stand up to Xi’s authoritarian model.

The stakes are even higher for Xi, who is widely expected to secure a third term as Communist Party chief later this year in a precedent-breaking move. A 2% growth rate would be far below the government’s official growth target of about 5.5% this year. Xi told officials to ensure China’s growth outpaces the US this year, the Wall Street Journal reported last month.

It would mark the first time the nation significantly undershot the annual goal since the practice of setting targets was adopted in the late 1990s. The government didn’t publish a target in 2020, when the pandemic hit.

This year’s goal of “around 5.5%,” the lowest ever set, was determined by Chinese leaders before the latest spate of lockdowns in metropolises including Shanghai, which have devastated domestic spending. Some economists now estimate China’s GDP contracted this quarter amid April declines in retail sales and industrial production.

“Even in an upside scenario, with an unlikely relaxation of the Covid-Zero stance, a 5% expansion -- let alone the government’s 5.5% target -- looks out of reach.”

A 2% expansion also would be the weakest for China since 1976, undershooting even 2020 when the pandemic pulled GDP growth down to 2.2%. Back in the aftermath of the Tiananmen Square crackdown, a much-smaller Chinese economy expanded 3.9% in 1990.

Politics may have played some part in the setting of a target that already looked ambitious before the latest pandemic-related measures, according to Stephen Jen, who runs hedge fund and advisory firm Eurizon SLJ Capital. There are likely divisions over the magnitude of regulatory moves against industries including property and technology, in his analysis.

“This is, we suspect, the main reason behind the obviously aggressive growth target: it was intentionally planted by the ‘pro-growth’ camp in Beijing to limit further ‘crackdowns’ and restore a better environment for the private sector to thrive,” Jen and colleague Joana Freire wrote in a note earlier this month.

Policy makers indeed have repeatedly rolled out pledges of more growth-friendly measures. Vice Premier Liu He earlier this week hinted that Beijing may be ready to let up on the clampdown on technology firms.

“China still has policy options,” Citigroup Inc. economists Xiangrong Yu and Xiaowen Jin wrote in a note this week. “At this juncture, a timely and decisive rollout of real stimulus measures is really critical to bring growth back on track.”

One footnote to the GDP rivalry: Biden has already claimed credit for outpacing China. “For the first time in 20 years, our economy grew faster than China’s,” the president said in a statement on GDP data in January.

Measuring the fourth-quarter of last year compared with the same period of 2020, the US expanded 5.5% against China’s 4%. American growth in the final three months of last year was accentuated by a jump in inventories. It remains to be seen whether the US can outstrip China on a calendar-year average basis. 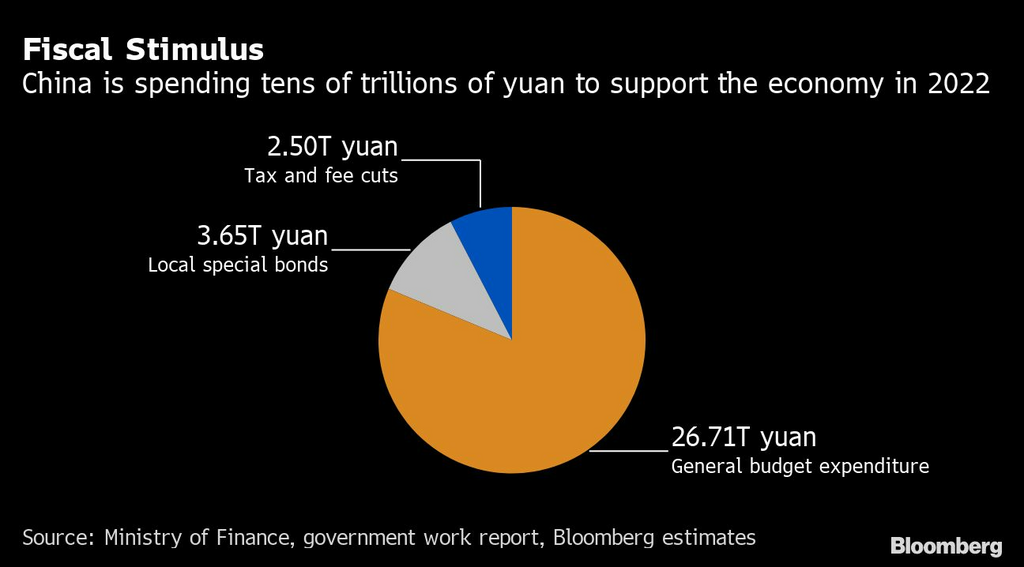 Reuters
‘Do whatever it takes’: Beijing urged to act as China’s economy falters