US, European equities fall ahead of US inflation data 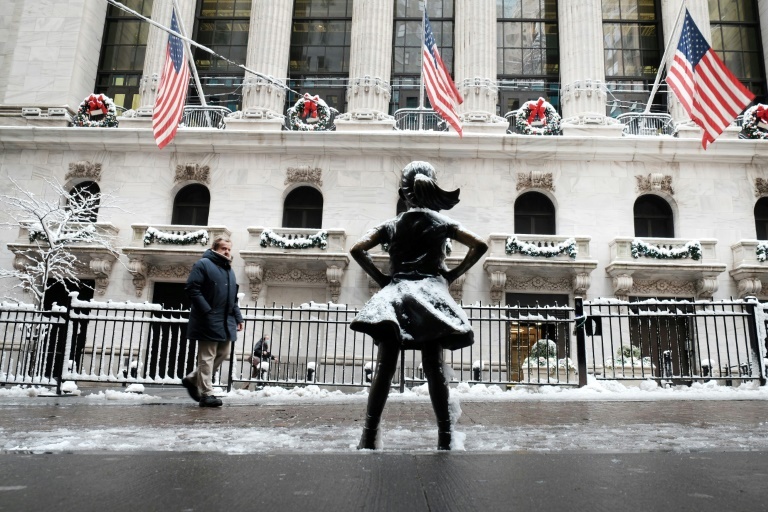 Traders have been on edge since the US Federal Reserve signalled last week that it was ready to raise interest rates sooner than expected to tame runaway prices.

"Risk sentiment has been pressured by concerns surrounding rising rates and the Fed's indication to tighten policy more aggressively," said a note by market analysts Briefing.com.

Investors will now be keeping a watch on inflation readings out of both the United States and China this week as they try to assess the outlook for the global economy with rocketing energy costs and supply snarls compounding problems caused by the fast-spreading Omicron Covid variant.

"With a quiet start to the week for big corporate and economic announcements, markets could remain in a holding pattern until Wednesday when US inflation figures will reveal just how acute inflationary pressures are in the world's largest economy," said AJ Bell investment director, Russ Mould.

Europe's main markets -- London, Paris and Frankfurt -- were all down in afternoon trading, but Asia finished the day higher.

Stock markets had mostly fallen on Friday after US data showed fewer new jobs than expected were created last month even as wages saw strong gains.

The closely watched non-farm payrolls figure on Friday came in well short of forecasts, marking a disappointing end to the year.

Fed officials are now faced with the problem of having to adjust monetary policy to rein in prices while at the same time avoid damaging the economic recovery and causing a panic on markets as the cheap cash that has fuelled a near-two year rally dries up.

The bank has already started tapering its vast bond-buying programme put in place at the start of the pandemic and has signalled it could start lifting interest rates from record lows from March, with some observers predicting three hikes this year.

The yield on 10-year Treasuries, a key indicator of future interest rates, climbed last week at its fastest pace in almost a year.

The International Monetary Fund warned that emerging economies should prepare for possible rough times as the Fed prepares to hike rates and Covid continues to hit global growth.

In other markets, oil prices were slightly lower as traders mulled the supply-side impact of ongoing unrest in Kazakhstan, which is a member of the enlarged OPEC+ producers' grouping.

Following a record year in 2021, bitcoin -- the world's biggest cryptocurrency -- fell below the $40,000 mark on Monday, its lowest level since September.

In corporate news, video game publisher Take-Two announced a $12.7 billion to acquire Zynga in a transaction that will combine the creators of "Grand Theft Auto" and "Farmville".

Tokyo - Nikkei 225: Closed for a holiday