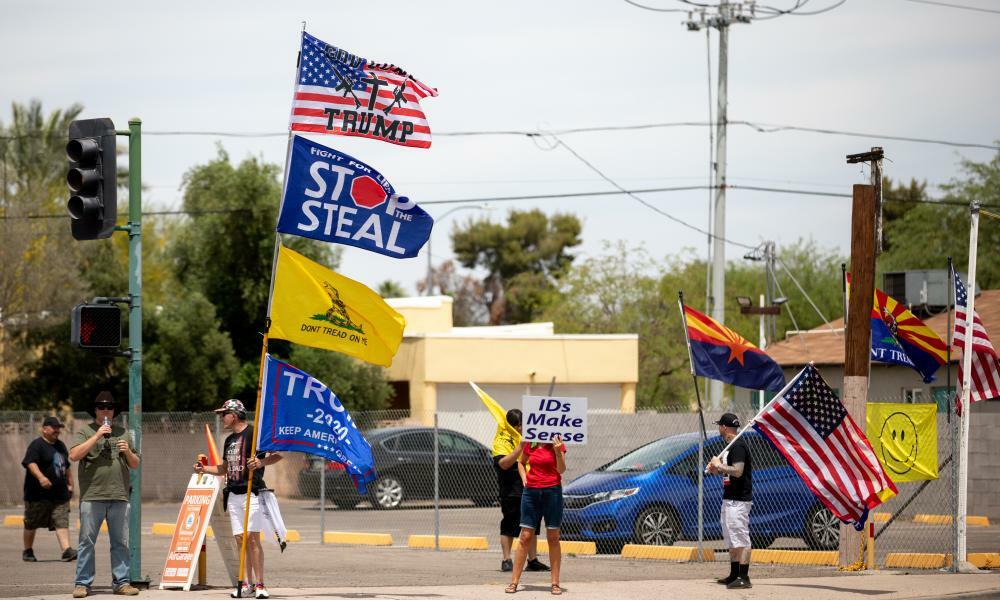 Back in May, I spent some time with a small group of people who had gathered outside of Veterans Memorial Coliseum in Phoenix to express their support for the investigation into the election results in Maricopa county, the largest county in Arizona.

Sitting under a tent in the desert heat, several people said the two official audits Maricopa county had authorized already weren’t sufficient. I asked the group if they would accept that Biden was the winner if that was what the audit showed. “Personally, I would, yes,” said Kelly Johnson, a 61-year-old who traveled to Phoenix from southern California.

I’ve been thinking a lot about that conversation as I watched the Arizona review conclude, finding no evidence of fraud and affirming Biden’s win. And I found myself returning to that conversation as I reported this week on similar efforts to investigate election results that are unfolding in Wisconsin, Pennsylvania and Texas.

Those supporting the reviews have offered similar assurances that an inquiry can only lead to more trust in the election results. If people have questions, what harm can come from looking under the hood to make sure everything is OK? “If there are things called into question, and there is not full confidence in the electoral process, providing audits and research and evidence that in fact these processes and procedures and the election results you can have confidence in, only supports that position where you can have confidence and here is why,” Wisconsin state senator Kathy Bernier told me last week.

Adrian Fontes, the former top election official in Maricopa county who lost re-election in 2020, foreshadowed this back in May. Elections are enormously complicated to administer, and to the untrained eye, things that look strange or nefarious might turn out to be entirely normal election processes. A bad actor offering an unscrupulous review, he said, could take advantage of that knowledge gap.

“They are taking advantage of the lack of information that the public has regarding the complexities of our system. And they’re creating a false narrative, and they’re setting themselves up to sell that false narrative,” said Fontes, a Democrat who is now running to be Arizona’s top election official.

The final presentation of the Arizona audit was filled with salacious allegations of irregularities – accusations of duplicate ballots and double votes – that turned out to be easily debunked.

Now, experts are deeply concerned that the same thing will happen in Wisconsin, Pennsylvania, and Texas. The inquiries will not find any evidence of wrongdoing or fraud, but will produce more fodder for those who already have doubts about the election.

Even Bernier, the Wisconsin state senator, acknowledged that some people would never be appeased by the investigations.

“At some point we have to accept the election results and move on. And there are a certain number of people will say ‘Yeah, but’ – and not accept it. And for those individuals there’s really nothing we can do or say,” she said.

Thank you to everyone who wrote in last week with questions. You can continue to write to me each week at sam.levine@theguardian.com or DM me on twitter at @srl and I’ll try and answer as many as I can.

Paul in the Philippines writes: Why doesn’t someone go to court against the gerrymandering, [if] a precedent exists in Texas already?

If there’s one thing that’s nearly certain, it’s that there will be lawsuits over redistricting. And that’s especially true in Texas, where districts have been struck down every decade since the Voting Rights Act was enacted.

But this year, political parties and civil rights groups bringing these lawsuits face a couple of unique challenges. One is just that they have less time to do so. Texas and other states are starting the redistricting process later than usual and are on a condensed timeline to get the new lines in place before elections next year. That means that litigators will have a very narrow window to bring the cases they need to.

Because of the supreme court’s 2013 decision in Shelby County v Holder, this is also the first time since 1965 that Texas won’t have to get its districts pre-cleared by the federal government before they go into effect. That gives Texas a huge, huge advantage. Even if their districts are eventually found to be discriminatory, they still can likely go into effect while lawsuits are pending. That’s why voting advocates are so insistent that Congress restore the pre-clearance requirement when it comes to certain places and election rules.

In 2019, the US supreme court said for the first time that federal courts could do nothing to stop partisan gerrymandering. That gives Texas another important shield, since lawmakers can now offer partisanship as an excuse for defending gerrymandered districts.