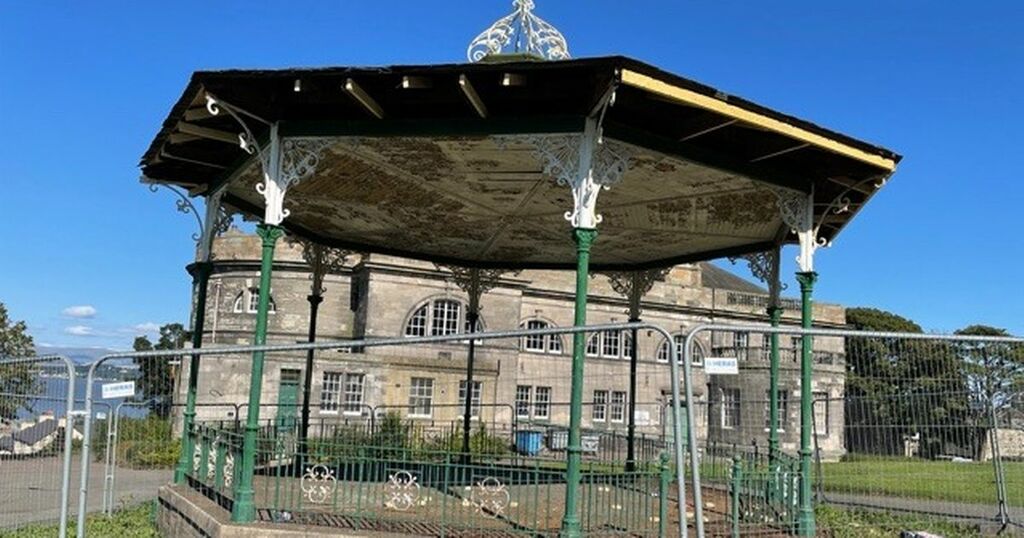 Work is underway to make the historic cast iron bandstand in Glebe Park, Bo’ness, stable and safe – with the hope that it can be fully restored before too long.

Falkirk Council commissioned the work, at a cost of £35,000, to keep the bandstand from decaying any further while it awaits extensive repairs.

In July, Bo’ness Community Councillor Madelene Hunt was shocked to discover that the bandstand was in such poor repair that sections of cast iron fairing had fallen from the side of the roof as the wooden support had rotted away.

She said: “It was very lucky that no-one was underneath it when it fell.

“We pressed for it to be made safe and repaired but the work has been delayed by Covid.”

This is just the first phase of the work but Mrs Hunt is confident that the band stand will be restored to its former glory before too long and hopes that it will be ready to be used for photographs on next summer’s Fair Day.

And the community council has already had conversations with local bands, including Kinneil Band, who have said they are interested in performing concerts once it is fully repaired.

A spokesperson for Falkirk Council said: “The works are specifically designed, through extensive survey, to make the Bandstand safe, and to stabilise it against ongoing decay, until such time as it can be fully restored.”

This involves putting all of the remaining cast iron eaves pieces into storage, while the decayed timber of the eaves will also be removed to facilitate initial rot works and a new plywood fascia and soffit applied.

A new PVC gutter and downpipe system will provide rainwater management while new timber straps will be applied to the existing timber-lined soffit to hold the lining in place until a refurbishment scheme of works progresses.

The spokesperson added: “We are currently expecting works to be completed before the end of the year as many of the works are dependent on suitable weather.”

The works are being carried out by BSL Interiors project managed by ZM Architecture, conservation specialists.