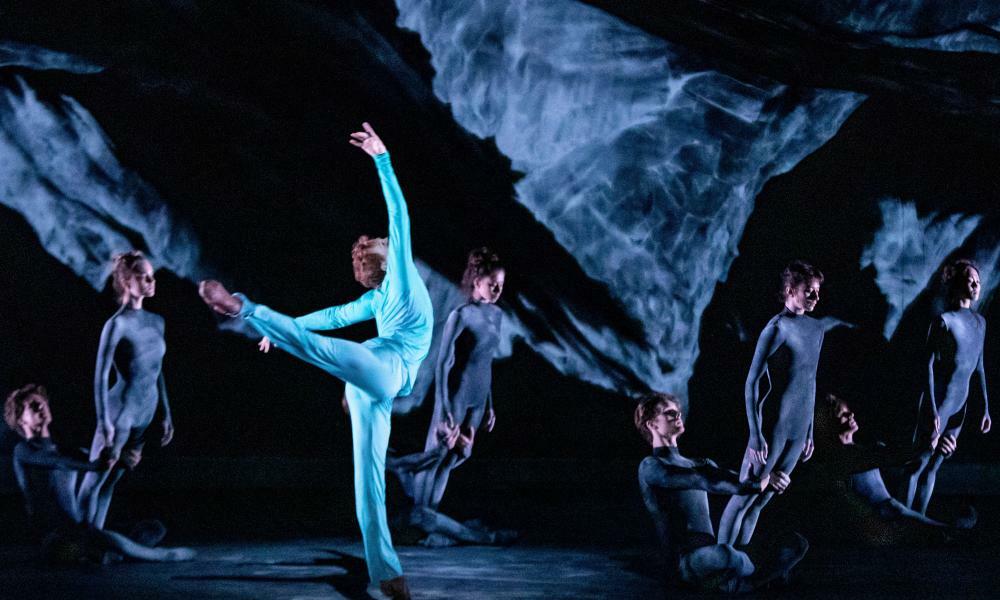 When Wayne McGregor’s reimagining of epic poem The Divine Comedy opens at the Royal Opera House on Thursday, it will be seven years since he sent the first email to composer Thomas Adès proposing a collaboration. But however long a ballet is in the planning, the crafting of the choreography always comes down to the wire, crammed into the final weeks.

“For me that’s perilous but I just have to go with the flow,” says artist Tacita Dean, who has designed the production. “I think the adrenaline is important for the dancers,” she says, “the fact that it’s very fresh and unlearned.”

“I love a deadline,” grins McGregor when we meet backstage. “I’m not someone who internalises stress,” he says. “Because it’s only a dance, right?” he laughs, as if it’s not what he’s dedicated his whole career to. “I take pleasure in being on the edge.”

When we speak, it’s one week to opening night of The Dante Project, and McGregor and the dancers have a few hours of stage time each day to bring all the elements together. Musical director Koen Kessels is in the pit, though Adès himself will be conducting a full orchestra come opening night; backstage is dominated by Dean’s giant photograph of a jacaranda tree that is the backdrop for the second act; powdery footsteps lead to an incongruous portable building where the dancers are sprayed with chalk, part of Dean’s costume design, representing sins passed from person to person.

Wandering out of the wings is Edward Watson, who plays Dante, ready to be led through the circles of hell by Virgil. It’s Watson’s final principal role at the Royal Ballet (he’s already moved on to coaching, but hadn’t even decided to retire when he was first cast), and he’s been a muse to McGregor for the last 20 years. “Ed is one of the most wonderful dance-actors I’ve ever worked with,” says McGregor.

The subject was Adès’s idea. McGregor could see the broad physical possibilities, from the “gnarled aggressive” states of the Inferno to the more serene Purgatorio to the “divine, sublime” Paradiso, but it has driven him in a different direction. “Tom’s music is characterful in a way I’m not used to, and not inclined towards,” says McGregor, “but it’s so vivid and well drawn.” A choreographer known for his complex warping bodies and futuristic abstraction in Chroma, Infra, Atomos and Tree of Codes, and not so much for storytelling, Inferno is “45 minutes of carnivalesque mini narratives”, he says. We will see the characters Dante encounters, from Ulysses, the harpies and sinners stung by wasps to adulterous lovers Paolo and Francesca buffeted in an endless whirlwind.

When McGregor experimented with literary source material in Woolf Works (2015), he was hailed for reinventing the three-act ballet, rejecting straight retellings of Virginia Woolf’s novels for something more meta, riffing on themes, emotions and biography. That formal experimentation returns here in a journey not just from hell to heaven but from literal to abstract, monochrome to colour, negative to positive.

All these are manifest in Dean’s designs. Her vision of hell is cold rather than fiery. A vast chalk drawing of icy mountains took her months to draw, working alone before the music and dance were created. It was a shock for her to see it become a backdrop for lighting designers Lucy Carter and Simon Bennison. “Artists aren’t used to having their work just become a tabula rasa for other people to work on,” she says. “That was quite alarming, and then exhilarating, to see the effect of light projection to create these other worlds.” The mountain is drawn upside down and reflected in a circular mirror on the ceiling. “So the upright world is there,” Dean explains, “but beyond reach. The soul can never get there, there’s no way out.” For the final act, Paradiso, Dean has made a 35mm film, turning the opera house into a cinema. It’s an abstract exploration of colour, made through experimental processes using lighting filters and layers of complementary colours, “so you get these incredibly rich William Blake colours, dirty colours, not pure at all.”

The Divine Comedy is rooted in 14th-century Catholicism, with some outdated ideas of what constitutes sin – though Dean notes “there’s a special circle for corrupt politicians, and that’s not changed”. For the final act, McGregor has interpreted his own view of what might happen to us after life and the idea: “You can’t kill energy. That energy is contained within my body but when my body is no longer working, my energy still has to go somewhere, back into the universe in some way.

“It’s the extended self, the one that is pure energy and pure flow. I love this idea that we manifest energy eternally. And I imagine that’s what will happen to me when I die, that’s the de-mattering I look forward to, without fear.”

If they can get that last act right, it’ll be something beautiful, he says. “There’s an incredible part in the music where all this constellation of light, motion, music, spirit is happening, and then it just hovers and this incredible celestial sound opens up and the light fills the auditorium, and if we can get that moment to work I really genuinely hope there’s going to be a catharsis. The dancers emerge, they evaporate, they shine bright, they extinguish, until Dante himself is filled with pure light.” At which point perhaps the audience will transcend their velvet seats and melt together in pure energetic vibration? “That’s what we’re aiming for!”

I ask McGregor about his own personal ideas of heaven and hell. “I think repetition would be one of my versions of hell,” he says. “Doing the same kinds of things over and over again, just making ballets, or just working with the same people,” he says, telling me about a story in David Eagleman’s Sum: Forty Tales from the Afterlives where you’re in a heaven where you only see people that you’ve known and at first it seems wonderful, but then you realise it’s a version of hell. “You never get that new encounter, an unexpected phone call, a project you might be offered.”

His description of heaven doesn’t sound that different to his actual life, definitely involving his two whippets, plus “creativity, having the opportunity to test and challenge yourself”. McGregor always has numerous projects on the go: currently, a version of Margaret Atwood’s MaddAddam for National Ballet of Canada, directing an opera for Dutch National Opera, an AI creation for his own company and a family show based on Jim Henson’s The Dark Crystal. He often does movement direction for film and is in the midst of a four-year stint as director of the Venice Dance Biennale.

Heaven is also, inevitably, getting back on stage after all this time. “We’ve all been in purgatory, waiting,” he says, acknowledging that the pandemic has been hell for some. “Hopefully we’re moving towards light.”