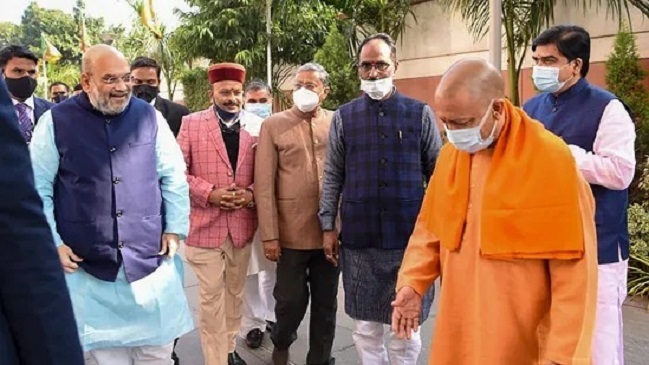 New Delhi: The meeting of BJP's Central Election Committee (CEC) is underway on Thursday to finalize the names of the candidates for the Uttar Pradesh assembly polls. Prime Minister Narendra Modi will also attend the meeting virtually.

The candidates of nearly 175 Assembly seats are to be finalized today. The meeting is being held at the party headquarters in the national capital. Elections for the 403 assembly constituencies in Uttar Pradesh will be held in seven phases starting February 10. Chief Minister Yogi Adityanath, UP BJP president Swatantra Dev Singh and Deputy CMs Keshav Prasad Maurya and Dinesh Sharma are also attending the meet.

Uttar Pradesh Chief Minister Yogi Adityanath is likely to contest the upcoming Uttar Pradesh Assembly elections from Ayodhya, said sources. Chief Minister Yogi Adityanath is likely to be fielded from Ayodhya and his name could appear on the first list to be released by the party soon. The BJP has scrutinized the candidates for more than 300 Assembly seats of Uttar Pradesh in the meeting. Deliberation will continue on the names of the candidates on Thursday, the last day of the meeting, said sources.

The seven-phase Uttar Pradesh (UP) assembly polls to be held between February 10 and March 7. The polling in Uttar Pradesh will be held on February 10, 14, 20, 23, 27 and March 3 . The counting of votes will take place on March 10. In the 2017 Assembly elections, the BJP won a landslide victory winning 312 Assembly seats. The party secured a 39.67 per cent vote share in the elections for 403-member Assembly. Samajwadi Party bagged 47 seats, BSP won 19 while Congress could manage to win only seven seats. (ANI)