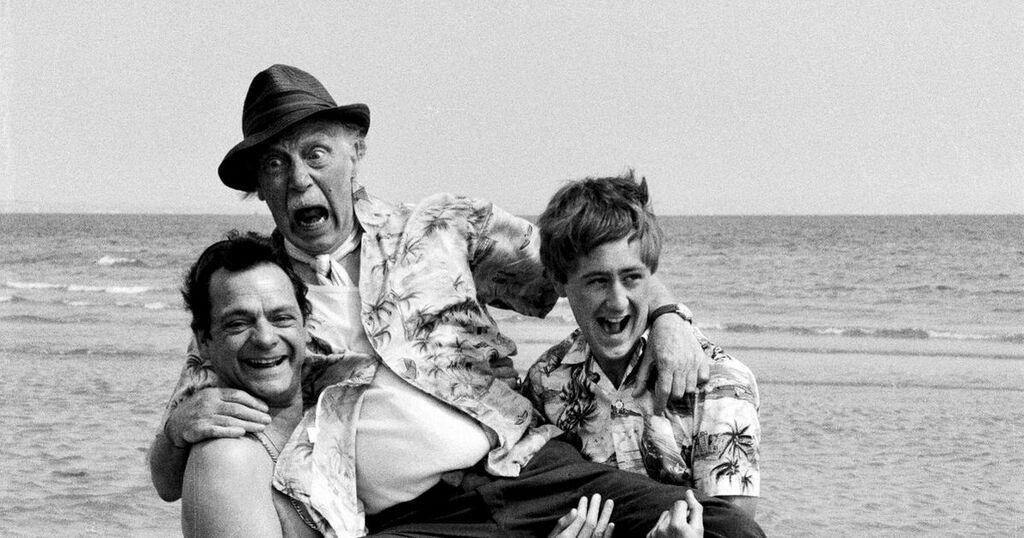 To celebrate 40 years since Only Fools and Horses first graced our screens the BBC has released behind-the-scenes images from the show which have never been seen before.

The much-loved comedy which followed the hapless but hysterical Trotter brothers as they tried to make their fortune in South London made its debut on BBC One in 1981.

The show, which starred David Jason as Del Boy and Nicholas Lyndhurst as his younger brother Rodney, received numerous awards, including recognition from BAFTA and the National Television Awards.

Now fans of the show can take a trip down memory lane and revisit all their favourite characters in action in a series of stunning photos.

Several black and white images feature all the best bits from the smash-hit comedy including Del wearing a crash helmet as he's forced to go hang gliding in Tea for Three.

In another snap, Nicholas Lyndhurst can be seen next to Buster Merryfield, who played old sea dog Uncle Albert.

Of course no collection of Only Fools pics would be complete without a shot of the bar in the Nags Head pub, through which Del fell through in that iconic scene.

“This cache of new photos reveals the genuine joyful camaraderie at the heart of one of the nation’s best loved sitcoms," said Robert Seatter, Head of BBC History.

"Fans will love seeing the on set antics of the leading actors, as well as the paraphernalia of broadcasting on location of ever popular episodes."

Luke O’Shea, Archive Collections Manager, added: “It is brilliant to share these fantastic memories with the audience. To the best of our knowledge, these images have not been released or viewed previously.”

Del Boy’s hilarious fall through the bar has been voted the greatest Only Fools and Horses moment of all time.

As the comedy celebrates its 40th anniversary today, the iconic scene pipped the famous chandelier episode to the top spot following a poll from the Radio Times.

It also topped the side-splitting sequence when Rodney and Del dressed up as Batman and Robin, running through the streets of Peckham.

David Jason, who played wheeler dealer Derek Trotter, told how he was delighted by the findings of the RadioTimes.com poll.

He said: “I am thrilled the falling through the bar scene has given so much pleasure over the years.

“I feel very fortunate to have been involved with such an iconic show.

“It started with the great John Sullivan for the fantastic scripts and the chemistry of the cast which brought it all to life. So many laughs over so many years.”

Written and created by the late John Sullivan, Only Fools and Horses began on September 8, 1981, with the episode Big Brother and ran for seven series until 1991.