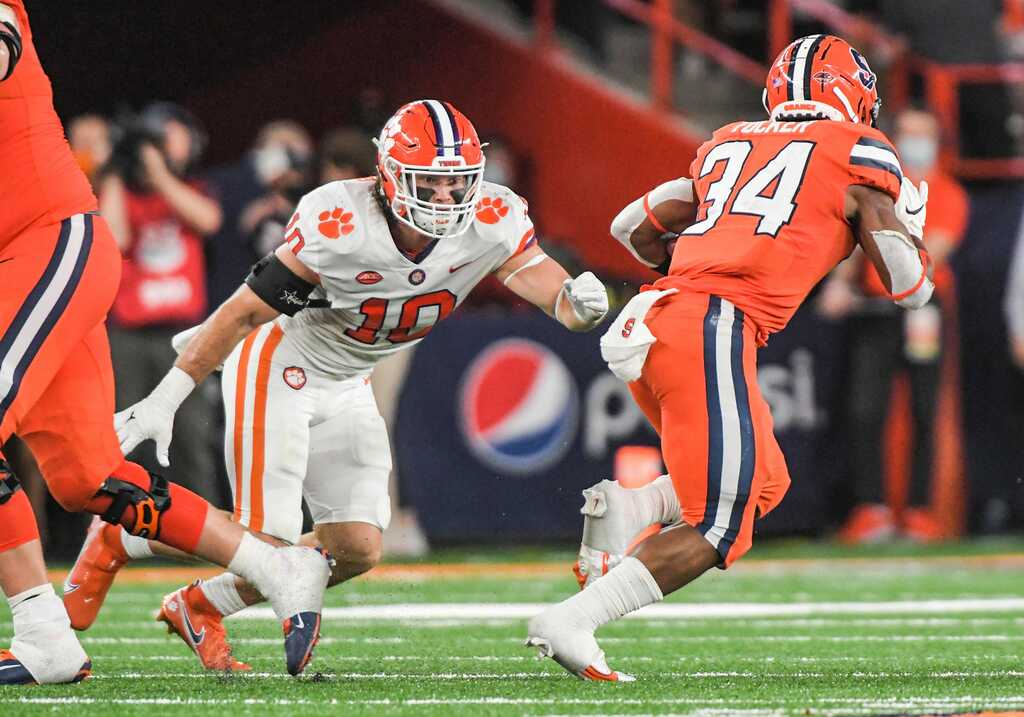 The Unpacking Future Packers Countdown is a countdown of 100 prospects that could be selected by the Green Bay Packers in the 2022 NFL Draft.

It’s going to be a busy offseason for Brian Gutekunst at 1265 Lombardi Avenue. Will the Green Bay Packers general manager be able to get Davante Adams a new deal? Will Aaron Rodgers be back? What key players (if any) will be cap casualties?

After Gutekunst wades his way through those weeds he has to find a way to improve the special teams play. The best way for Gutekunst to go about accomplishing that goal is by selecting players on day three of the 2022 NFL Draft that have extensive experience playing on special teams.

A player that falls under that umbrella is Clemson’s Baylon Spector. The Tiger linebacker checks in at No. 100 in the Unpacking Future Packers Countdown.

Spector came to Clemson as a three-star recruit out of Calhoun High School in Georgia. In 2019, Spector recorded 7.5 tackles for loss and two sacks.

Spector earned Second Team All-ACC in 2020 after recording a team-leading 64 tackles. To go along with his 64 tackles, Spector recorded 10.5 tackles for loss and a team-high 4.5 sacks.

This past season, Spector recorded 74 tackles, 3.5 tackles for loss, 2.5 sacks and one interception.

The Clemson linebacker has a high football IQ. He’s got strong key and diagnose skills. The Georgia native is smart, assignment sound and rarely out of position. Spector has a nose for the football and is always in the vicinity of the football.

“Baylon’s instincts are NFL starting caliber,” Shane Coughlin, the Director of College Scouting for the Shrine Bowl said. “He’s a really efficient mover and always keeps his eyes disciplined, it’s his instincts that coordinate effectiveness between his mental and physical strengths.”

Spector possesses excellent short-area burst and closing speed. He’s great at playing in the box (tackle-to-tackle). The Clemson linebacker does a great job of playing through the mess and beating offensive lineman to the spot. He’s a sound tackler and missed tackles are a rarity.

“I love how he tracks ball carriers while scraping through contact,” Coughlin said. “He’s able to sift through blocks working over the second level of the defense all while matching foot speed and mirroring running backs lateral agility.”

While Spector is a sound run defender, he’s also a reliable defender in coverage. He shows good lateral quickness and does a good job of matching the speed of running backs and tight ends.

“He has impressive control and anticipation during his setup steps in coverage,” Coughlin said. “His backpedals and overall lateral movements are measured and work to close angles to limit yards after the catch.”

Spector has a relentless motor. The Clemson linebacker leaves it all out on the field. That relentless shows up as a blitzer, where his effort and strength overpower running backs.

“He has above average bend for an off-ball linebacker,” Coughlin said. “He wins with the late adjustments against backs and can fight through the first level with effort.”

“Baylon has experience in all phases of the kicking game throughout his career and I do think he has NFL value there,” Coughlin said. “I see him primarily playing guard on punt coverage and a disruptor on kick coverage. His overall football intelligence and tackling ability translates all over.”

Fit with the Packers

The Packers need to improve the depth at inside linebacker and find a way to improve their special teams play. By drafting Spector, Gutekunst would kill two birds with one stone.

If the Packers bring back De’Vondre Campbell, Spector could slide in as the number two backer opposite Campbell.

If the Packers opt to let Campbell walk or if Campbell gets a bigger paycheck elsewhere, Spector could step in and be a day-one starter. Spector has all the tools to be a four-down backer and difference-maker at the next level.

“Baylon has four down value,” Coughlin said. “He’s a two-year starter from an excellent program. He’s an honor roll student and graduate. He’s a former high school state championship quarterback with prototypical size and athleticism. His production has increased in each of his years at Clemson. He’s scheme versatile, and has special teams traits.”

Anything Spector would provide on defense as a rookie would be gravy. If the Packers were to draft him on day three of the draft, they’d be getting a hired assassin on special teams.