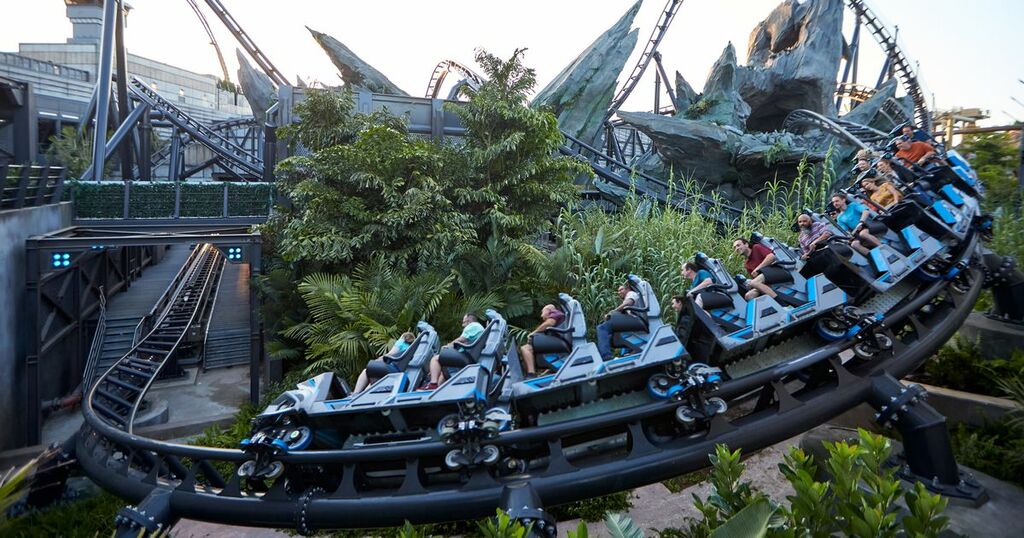 Baggage checked in, security complete and drink in hand, I was finally ready for take-off to Florida on my first long-haul trip since the unwelcome travel hiatus.

While scrolling through the in-flight film and TV guide it suddenly dawned on me. I had done way too much viewing over the last two years. Seen that film, binged that TV series.

But not to worry as I was on my way to somewhere that would make me put down my devices and not have me reaching for the remote.

At Universal Orlando you don’t simply watch the action, you experience it first-hand.

Here, families walk into their favourite film, children rub shoulders with their top superheroes, leaving troublesome realities behind – and there’s an array of brand new experiences including rides, live shows and accommodation to enjoy.

All of it is escapism at its finest – a guaranteed action-packed adventure. Isn’t that just what we need after the last two years?

Experience the thrill of VelociCoaster

Definitely one for the adrenaline junkies, it catapults riders 155ft into the air and speeds through the futuristic, yet prehistoric, park at up to 70mph.

Located within Universal’s Islands of Adventure, once in the queue, the scene is set with riders coming up close to velociraptors as they wander through dinosaur research labs before getting strapped in ready for the action.

VelociCoaster boasts 360-degree inversions, an 80-degree drop and steep inclines, not that any of this matters once you’re aboard.

No amount of knowledge of the 4,700ft track could prepare you for the thrill of this unmatched rollercoaster.

For me, the first time round was a gripping blur which made me want to ride it again. Second time, I was able to fully appreciate the detailing of the coaster, including speeding through the raptor paddock, sweeping inches above the lagoon and narrowly avoiding the jaws of a gnashing raptor.

Other themed rides for dino lovers include Jurassic Park River Adventure – a raft ride with an eight-storey plunge – and the kid-friendly Pteranodon Flyers. At the Jurassic Park Discovery Centre you can find dinosaurs, test your DNA, play a trivia game and maybe even witness a baby velociraptor hatch.

Inspired by the Bourne film franchise, it blurs the lines between cinema and stage performances, with live actors, hair-raising stunts, fisticuffs and shoot-outs at every turn.

From your seat you’ll literally feel the heat from the explosions as you watch Jason Bourne try to evade capture.

And it wouldn’t be a blockbuster show without battling the elements alongside its star, so expect to experience fire, smoke and wind. The storyline is exhilarating and the stunts are explosive, but it’s the new technology that will have you gasping, with moving set pieces and ultra-vivid visuals on a whopping screen that’s half the size of a football pitch.

Wandering down Diagon Alley is always going to be a magical experience, but exploring the Wizarding World of Harry Potter during the holiday season gives it an extra sprinkling of fairy dust.

Hogsmeade, Diagon Alley and the corridors of Hogwarts are beautifully decorated for Christmas and building tops are adorned with snow.

Be sure to stick around when the sun goes down to watch the stunning projection show on Hogwarts Castle, and ride Hagrid’s Magical Creatures Motorbike Adventure after dark for a unique experience.

Visiting here at Christmas just feels right. After all, there has always been something festive about the Harry Potter franchise.

Kick back and relax at Universal’s Endless Summer Resort

Universal’s Endless Summer Resort – Dockside Inn and Suites is the newest hotel at the Orlando Resort.

Aimed at families, it is part of its new ‘value’ accommodation, with a starting rate of £59 per night. Rooms sleep up to six and with two separate bedrooms, families no longer need to worry about dad’s snoring keeping the children awake.

Each room has a kitchenette, a picnic table for meals and a bathroom with separate bath and vanity areas so multiple people can get ready at once.

Two pools with bars are the perfect place to relax after a long day at the parks, or perhaps you’d prefer to stay dry in the Sunset Lounge?

Guests get complimentary access to select live entertainment venues at CityWalk, and purchases from selected Universal and CityWalk stores can be delivered to the hotel, free of charge.

You can also get further information at visitflorida.com and visitorlando.com.