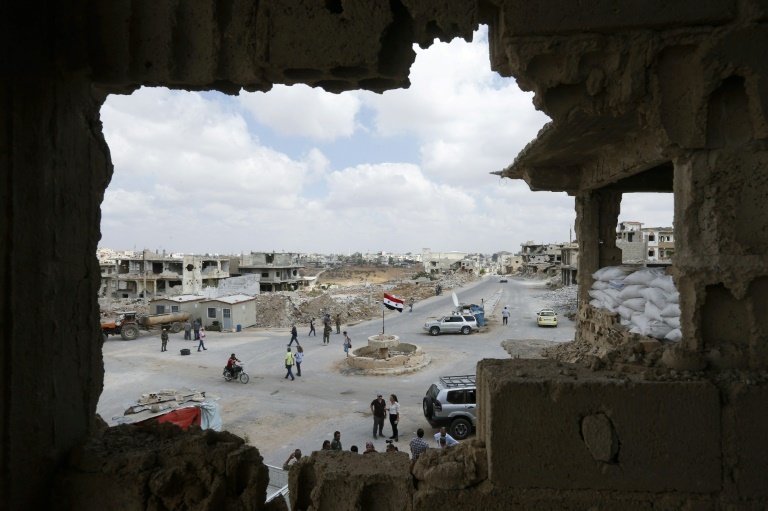 Daraa (Syria) (AFP) - An uneasy calm held sway in a southern Syrian city Sunday after the army entered a former rebel holdout under a surrender deal, AFP journalists on a government-organised tour said.

Daraa province and its capital of the same name, the cradle of Syria's uprising, returned to government control in 2018 under a previous ceasefire backed by government ally Russia.

But rebels stayed on in a southern part of the city called Daraa al-Balad, and over the summer they clashed with government forces on its outskirts seeking to retake the area.

A new Moscow-brokered truce has seen dozens of opposition fighters bused out of the city over the past few weeks and government forces return to the area since Wednesday.

The guns had fallen silent but the areas visited were largely devoid of civilians, and several onlookers on motorbikes refused to speak to the media.

"Nine checkpoints have been set up on the edges of and inside Daraa al-Balad," a military source told AFP.

Under the deal, fighters who agree to the truce have been invited to give up their guns and sign up to stay in the city under a so-called reconciliation process.

"The process is ongoing to settle the status of those fighters who wish to do so after handing over their weapon," the source said.

"There is cautious calm and we are waiting for the reconciliation steps to be completed," the source added, expressing the hope that everyone would accept the deal.

"The state would prefer not to have to resort to a military solution."

The United Nations and rights group Amnesty International have warned of dwindling supplies inside Daraa al-Balad in recent weeks, after government forces tightened the noose around the area.

But a source with the provincial authorities said: "Two bakeries have started working again in the past few hours and work is under way to set up several medical treatment posts."

The fighting since July caused more than 38,000 people to flee the southern half of the city, the UN has said.

The Syrian Observatory for Human Rights, a Britain-based war monitor, says 23 civilians including six children, 26 members of the pro-government forces and 20 rebels were killed in the weeks-long escalation before the truce.