A sunny Tuesday morning in mid-May and Amey Soo is on what she calls the “baby walk” along the water in the inner-west Sydney suburb of Drummoyne.

As kayakers and fishers fiddle around on the boat ramp, she stands in the shade with her newborn in a carrier and contemplates her vote in the marginal electorate of Reid.

She usually votes for the Liberal party, she tells Guardian Australia, but won’t be this time.

She would have liked to support an independent, like the teal candidates running in the seats of Wentworth and North Sydney, but doesn’t see an obvious alternative. She is still “not too sure” about Labor, she says, but thinks they’re “the least of the evils”.

So, why the change?

“Because of Scott Morrison,” she says.

Held by the Liberal party on a margin of just 3.2%, Reid is one of a few key NSW seats being targeted by Labor as it seeks to win government on 21 May. Internally, the party is confident of winning the seat, held by the moderate Liberal party MP Fiona Martin.

But Labor has seen this movie before. In 2019 it also held high hopes Reid would flip, running the former McKell Institute executive director Sam Crosby. Instead, the seat’s margin barely shifted, one of a number of disappointments for Labor on the night.

In 2022, western Sydney is, as always, a tantalising prospect for both major parties. As Labor hunts Reid, the Coalition believes it is in with a chance in the neighbouring seat of Parramatta, where Labor has preselected the economist Andrew Charlton, a former adviser to Kevin Rudd who was parachuted into the seat despite opposition from the local party.

A diverse electorate which covers Sydney’s second CBD and the surrounding suburbs of Granville, Toongabbie, Dundas and Harris Park, Parramatta has been held by Labor since 2004. It has a high proportion of Arabic-speaking residents, as well as voters of Indian, Chinese and Lebanese descent.

The local member, Julie Owens, is retiring, and the prime minister has made a series of appearances in the electorate alongside the Liberal party candidate, Maria Kovacic, who he has dubbed “the real eel” because of her support for the local rugby league club.

The Coalition hopes Labor’s decision to install Oxford-educated Charlton, who lived in the ritzy eastern suburb of Bellevue Hill, will backfire. But voters who spoke to Guardian Australia for this piece either weren’t aware of the local candidates, or else were not worried.

At a playground in Parramatta Park, Hannah Graham has just read an article in Sydney tabloid the Daily Telegraph about Charlton failing to name three favourite restaurants in the area. She hasn’t decided who she will vote for, and said the article didn’t sway her.

“I don’t think it really matters that he’s not from here,” she says.

“I’ve gone for jobs before where I didn’t know the company. I don’t think that means you’re not able to do the job necessarily.”

Others are similarly inclined. In Harris Park, a suburb outside Parramatta with a large Indian-Australian population, Ramesh Vyas and his two friends Dinesh and Chiman Patel are all voting for Labor.

“Mr Charlton!” they all echo when asked who they’re voting for.

“Good man. He came to our temple. We love Charlton too much,” Vyas says.

Hamna Amaan, from Guildford, hasn’t heard of either of the local candidates, but is nonetheless also supporting Labor. “I just like, favour them, with what they’re advocating,” she says.

So too do Irfan Azhar, a construction worker from Granville who says he doesn’t trust the Liberal party, and Moses Nassar, who, while running his fingers over a set of rosary beads outside a Lebanese cafe in Harris Park, says he still loves Gough Whitlam.

“I talked to [Andrew Charlton] last week,” he says. “He was here. I support Labor all the time. Labor gives a chance a little bit to the poor people. Liberal for rich people.”

If that sounds bad for the Coalition, it certainly wasn’t the only impression. Voters like Louie El Azzi said he was voting for Morrison because he felt “comfortable” with him as prime minister. Varun Dabas was one of many who said he was voting for the Coalition because he believes they handled the Covid-19 pandemic well. Many others remained undecided, uninterested, or unsure about Albanese.

Manorm Prasad thinks Morrison is “good”, and nominates education and safety as her two issues. But, like many first-generation Australians in Parramatta who Guardian Australia spoke to, she said she would ask her children for advice about who to vote for.

“Definitely, they’re going to tell me what to do, because I have no idea and they are more educated than me,” she says.

And so back to Reid.

Stretching from the wealthy inner-west suburbs of Drummoyne and Five Dock to diverse, densely populated Strathfield and out to the true west around Lidcombe and Homebush, campaigning in Reid requires a deft touch.

In the leafy bayside suburbs in and around Drummoyne, voters tend to have more in common with the wealthy eastern suburbs, where independents like Allegra Spender are causing headaches for moderate Liberal MPs. Usually a Liberal-dominated voting area, many residents here cite climate change and a federal integrity commission as key issues.

Soo is one of them. She calls Morrison a “hypocrite”, who has embarrassed Australia internationally by dragging his feet on climate action. She cites a series of billboards organised by comedian Dan Ilic before the Cop26 climate summit in Glasgow which satirised Australia’s record on emissions reductions.

“It just makes a mockery of Australia,” she says. “[He] just makes us look like we want to sell coal to anyone and everyone when we’re not – we’re not like that.”

She is not alone. Also on his morning walk is retiree Vaughn Kirkby. Another longtime Liberal party supporter, he’s feeling particularly torn as the election approaches.

“She represents my views,” he says of Martin.

Kirkby doesn’t rate the Labor leader, Anthony Albanese, and he hasn’t been impressed by the opposition generally – “I think there’s a lot of lightweights” – and yet, he’s still not sure he can bring himself to vote for Morrison.

Not everyone agrees, of course. Fiona Sarkis, a lawyer from the neighbouring suburb of Russell Lea, thinks Morrison is unfairly criticised, and appreciates the job he did in guiding the country through the worst of the Covid-19 pandemic.

“I know people whinge about bits and pieces, but really, in the scope of things he’s done pretty good,” she says.

“I didn’t not work a day. My kid had daycare looked after. My husband had his job in construction. I look at myself and my family, [we were] all pretty safe during Covid.”

For Sitou, an academic who lives in Homebush in the electorate, campaigning in the seat has meant juggling a mishmash of local issues which vary widely. While voters in Drummoyne might cite climate change as a key issue, head a little farther west and the issues on voters’ minds tend to stick to the central theme of the campaign: cost of living.

“It’s really distinct,” she says. “Any smart campaign, you’ve got to target your messaging and issues you want to shine a light on. Overwhelmingly, the feedback I’m getting when I’m out doorknocking is different areas have different concerns.”

In Burwood, Shelley Tan, a nurse, isn’t feeling full of confidence about Albanese, but says she’ll vote for Labor because she believes the party will do more to help lift wages.

“[Albanese] is not the greatest, but I’ve got no other choice, do I? I don’t want to vote for Scott Morrison.”

That same sentiment pops up over and over again as you speak to voters across the west of Sydney. They may not like Scott Morrison, but they’re hardly overwhelmed with enthusiasm for what Labor is offering. It would also concern the opposition to hear that while many voters who Guardian Australia speaks to have listed healthcare – traditionally one of the party’s strengths – as a priority, they aren’t necessarily linking that to a Labor vote.

Lucy, from Burwood, who declines to give her last name as she runs after her grandchildren through the park, is also a nurse. She wants the government to invest more money in healthcare, but also says she “trusts” Morrison to improve the sector.

“Maybe I will choose Morrison, but I think after I choose him I hope something can improve,” she says.

Reid has one of the highest Chinese-Australian voting populations in the country, and concern about the Morrison government’s handling of the relationship between both countries is also an issue that pops up repeatedly.

“I’ve had enough with Scott,” Li Wu from Strathfield says.

Wu voted for the Liberal party at the last election, but says she’s switching her vote as a result of the worsening trade standoff between both nations.

“I really want the government to fix the relationship with China. That’s all,” she says.

Sitou says it’s an issue that has continued to pop up during the campaign. She says the concern about “heightened rhetoric” around China is also pragmatic.

“The main concern is the impact the heightened rhetoric has on people’s lives and also small businesses,” she said.

“There’s quite a lot of small businesses in Burwood that have relationships with China, [and] their concern is what is this heightened rhetoric means for us and for our businesses.”

But it’s also true that as you head into Reid’s more diverse pockets, the traditional attack lines on the prime minister that have been baked into mainstream discourse – Scotty from Marketing, the Liar from the Shire – seem less relevant.

Sabita Banik and her husband, Subrata, both general practitioners from Strathfield, are eating lunch at Oporto in Strathfield as they explain that they don’t want to vote.

Sabita is concerned about the cost of living because, she says, “the cost of everything is going up, but not our salaries”, but she doesn’t know anything about Albanese. On Morrison? “I like him. I see Scott all the time. I see his Facebook. His cooking. Cooking Indian dishes,” she says.

Ashay Parulekar, who is voting in his first federal election after becoming a citizen, tells Guardian Australia he is voting for the Coalition in part because of the strength of the economy, and because of the government’s fostering of ties with India.

“Definitely the relations with India and Australia has strengthened over the years,” he said.

Parulekar came to Australia in 2015 and says he has seen “a drastic change” in the relationship between India and Australia. “The relations have gone amazing [since then].” 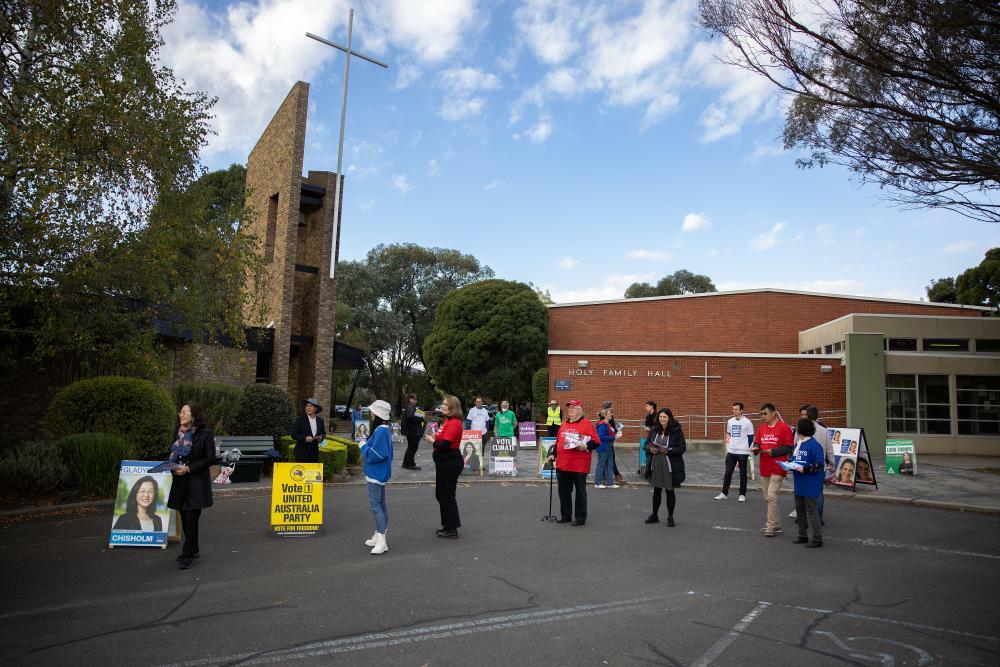 Ultra-marginal Chisholm hopes for a milder ride, but scrabble for votes still intense
Liberal Gladys Liu won the Melbourne eastern suburbs seat in a hugely contentious 2019 poll, and needs every vote she…

The New Daily
Libs call for AEC probe into candidate

Labor's Parramatta candidate Andrew Charlton may have breached electoral laws, by listing a Woollahra rental owned by his wife as…