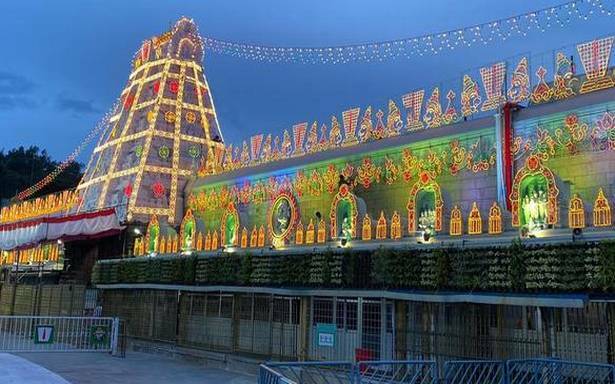 Uncertainty looms large over the open conduct of the nine-day annual Brahmotsavams of Lord Venkateswara at Tirumala this year.

Speculations of a possible third wave of COVID has nevertheless dampened the spirit behind the conduct of the annual event, to which devotees across the globe attach immense importance.

Though the mega festival is scheduled to commence from October 7, the absence of the ‘hype’ that normally surrounds the mega pageantry is being conspicuously felt.

Generally the preparations for the grand festival begin at least four months in advance. Ahead of the commencement of the festival, the TTD embarks on numerous activities like sprucing up the town, barricading of the Mada Streets, setting up of pandals at identified points, works relating to electrification and sanitation, drawing police forces from all over the Rayalseema districts, internal drafting of additional staff atop the town besides augmenting arrangements at Annadanam, darshan, accommodation, tonsuring, etc,.

Even though the annual event is exactly a month away, the top echelons of the Tirumala Tirupati Devasthanam (TTD) management are yet to arrive at any concrete decision with regard to the open conduct of the event .

For the first time in the history of the temple, the celebrations last year were confined only to the inner precincts of the hill temple owing to the pandemic. Though the temple was all set to experience two Brahmotsavams last year, they were conducted on a low key note devoid of all the pomp and gaiety. Even the two-time daily processions of the deities on various vahanams that form the core part of the festival were limited to the four walls of the temple complex.

Should the TTD decide to tread last year’s path, then it would be for the second consecutive year that the devotees would be deprived of the opportunity of taking part in the festivities.