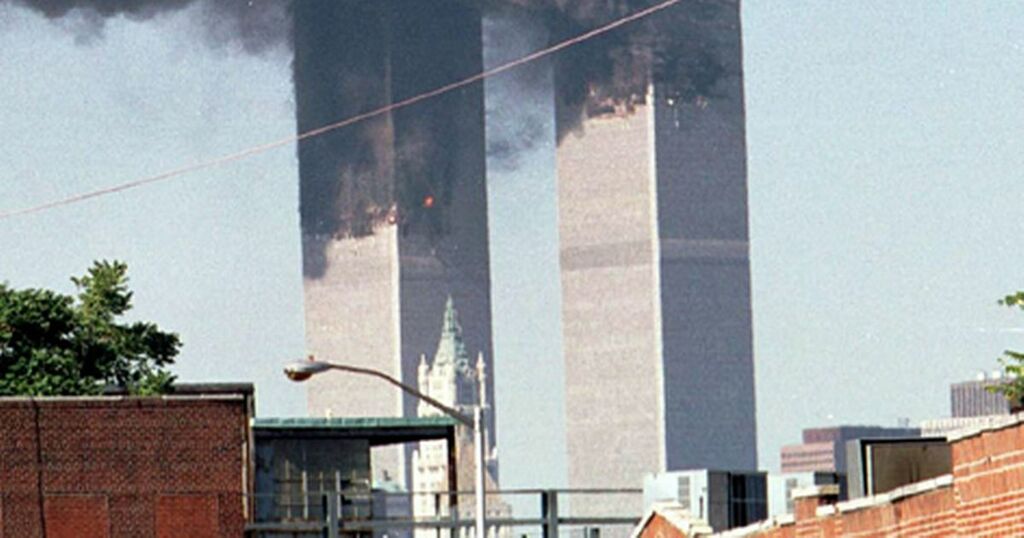 It was the most deadly terror attack in history, claiming the lives of nearly 3,000 people - so it's no surprise that many connected to 9/11 are still searching for answers.

Last month, the Mirror revealed the family of a British man killed in the disaster is demanding a new inquest, claiming the Twin Towers were blown up from inside.

Relatives of Geoff Campbell do not believe the two aeroplanes that crashed into the World Trade Center in 2001 caused the skyscrapers to collapse.

His family, supported by a scientific team, claim the towers were laced with explosives which brought them down.

While many 9/11 'truthers' have claimed the terror attack was an inside job over the past two decades, a number of other mysteries - while less controversial - remain unsolved.

Here, we reveal some of the enduring mysteries.

How was the call made to shoot down civilian planes?

One of the most famous images from September 11, 2001, is of George W Bush being told the US is under attack.

Footage of the then-president reading to first-grade students at a school in Florida shows the leader being told that a second plane has crashed into the Twin Towers.

What is less documented after this moment is exactly who was giving the orders - chiefly, the call to authorise shooting down civilian aircrafts.

According to History, the immediate operational chain of command in such instances runs from the President to the Secretary of Defence - but both were unreachable after being shielded following attacks on New York and the Pentagon.

Consequently, vice president Dick Cheney was the one who ended up giving the controversial order from the White House command centre, after repotedly getting the verbal OK from Bush.

However, while there are detailed records of other calls made that day, no records remain of the crucial conversation between the president and his deputy - and the time-frame of their correspondence remains unclear.

In 2006, Newsweek reported that "none of the [9/11 Commission] staffers who worked on this aspect of the investigation believed Cheney's version of events" about the call.

While the decision was academic in the end, with no flights shot down by US defence forces, had it come to fruition scrutiny over the chain of events would have been far, far greater.

What really happened on Flight 93?

When United Airlines Flight 93 was hijacked as part of the September 11 attacks, it is believed the four Al-Qaeda terrorists intended to crash it into the US Capitol building.

Instead, following a passenger revolt, the aircraft crashed into a field in Pennsylvania well short of its target.

All 44 people onboard - including the four hijackers - were killed, and the story of the passengers' heroic struggle rightly inspired movies and television dramas.

Nonetheless, the narrative that those onboard managed to wrestle control of the jet and crash it themselves, which has gone down in legend, is actually less clear.

Based on the records of telephone calls made from the plane, it's certain that many passengers intended to storm the cockpit, but no evidence has yet come forward proving they did.

According to the Independent, despite the cockpit voice-recorder being retrieved in perfect working order, its contents are yet to be published.

This has given way to alternative theories, denied by the US military, that Flight 93 was brought down by a US government plane following Cheney's controversial order - or that a bomb went off onboard.

The Associated Press later reported that the last recorded call from the plane was from a man to an emergency operator, which said an explosion had been head on board.

"He said he believed the plane was going down," the operator told AP.

"He did hear some sort of an explosion and saw white smoke coming from the plane, but he didn't know where. And then we lost contact with him."

Why did military mislead investigators over interception planes?

Four planes were hijacked in total on September 11, and none of them were ultimately intercepted by US forces.

Nonetheless, in the days following the attacks, military officials insisted that planes were quickly deployed and ready to shoot down United Airlines Flight 93 before it crashed prematurely.

Investigators for the 9/11 Commission found that this was not true and that those involved provided false information, the Philadelphia Inquirer reports.

This included the assertion that they responded to the Flight 93 hijacking at 9.16am - 12 minutes before the jet was even hijacked, according to tapes.

"I was shocked at how different the truth was from the way it was described," a top lawyer for the commission told the Washington Post.

The newspaper reported that some on the commission even deemed their suspicions grounds for a possibly criminal probe into a cover-up.

Who was behind deadly anthrax attacks?

A week after the September 11 tragedy, the US was rocked by another, lesser known attack - this time through deadly anthrax.

Over a series of weeks, letters containing anthrax spores were mailed to news media offices and to Democratic senators Tom Daschle and Patrick Leahy.

Five people were killed and 17 infected, leading the FBI to launch an investigation that became "one of the largest and most complex in the history of law enforcement".

Despite this claim, it was never fully proven exactly who was behind the attacks.

While initially linked to Al-Qaeda or Saddam Hussein in Iraq, forensics showed the weapon was made on US soil.

One US bioweapons expert was publicly named and saw his home raided by the FBI before being exonerated - leading him to sue.

Bruce Edwards Ivins, a scientist at the government's biodefence labs in Maryland, then became the chief focus before committing suicide in 2008.

The FBI insisted that they believe Ivins acted alone and formally closed its investigation in 2010.

However critics, including colleagues of Ivins, questioned the findings and cast doubt on the conclusion.

Their protests included that he was only one of 100 people who could have worked with the vial used in the attacks and that the FBI couldn't place him near the New Jersey mailbox from which the anthrax was mailed.

Why wasn't there more warning about toxic fallout?

Following the search for survivors in the rubble of the Twin Towers, evidence mounted that dust from the fallout had a horrific impact on rescue workers' health.

In the years since the disaster, research has shown that male firefighter responders had a cancer rate 19 per cent higher than those not exposed, alongside higher rates of asthma and PTSD.

In the new ITV documentary, 9/11: Under Attack, a shell-shocked pair of workers who had managed to escape from the building are shown covered in white dust - save from a small patch on their faces where someone had mercifully poured water.

"Whatever this stuff is, I hope it doesn't kill us," said the woman.

But many of the people who survived the attacks would go on to become extremely ill as a result of breathing in the dangerous air.

John Mormando was in the area at the time and is one of a group of 15 men who have been diagnosed with breast cancer since the attack, a condition that's rare in men, he told The Guardian.

Tens of thousands who lived or worked in the neighbourhood at the time found themselves breathing toxic fumes and particles from the skyscrapers, the newspaper reported.

While a health care bill has since been established for those afflicted, questions have been asked as to why the area wasn't warned about the toxicity of the site in the days that followed.