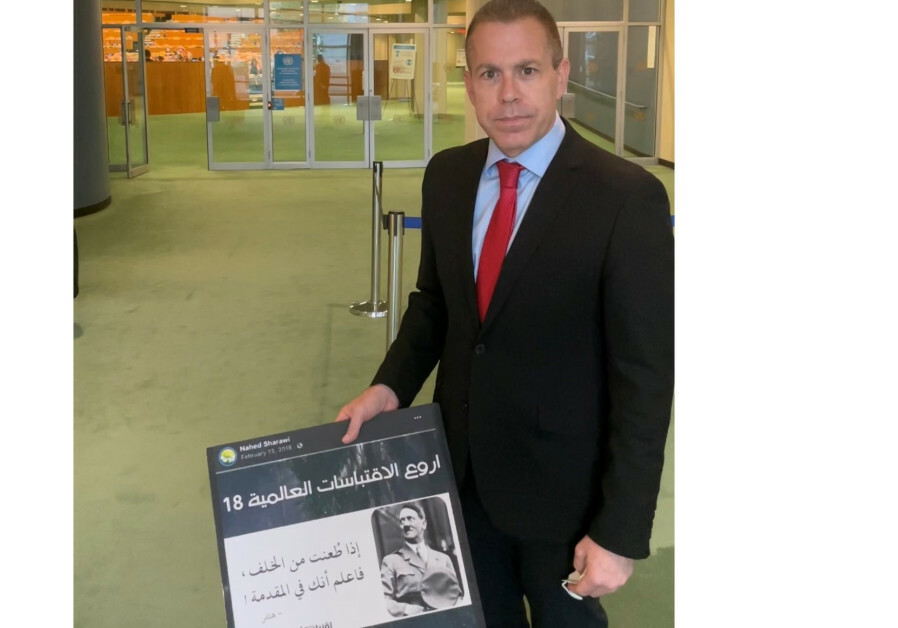 UN security personnel stopped Israeli Ambassador to the UN Gilad Erdan from bringing a display poster into the General Assembly on Monday showing a social-media post by a UNRWA teacher that glorified Hitler.

He had meant to display the post during a discussion on the United Nations Relief and Works Agency for Palestine Refugees so that he could illustrate his concern about the problem of incitement in UNRWA schools.

Israeli Ambassador to the UN Gilad Erdan decrying the UN's prevention of his display of pro-Hitler posts by an UNRWA teacher, October 4, 2021.

“I am shocked because I brought here with me a photo of a UNRWA teacher’s post glorifying the most horrific mass murderer in history, Adolf Hitler,” Erdan said. “Unfortunately, shockingly, I was prevented from bringing in this photo in order to share this proof with the other distinguished ambassadors here.”

UN protocol prevents ambassadors from using props when delivering speeches at the UNGA, a UN representative told The Jerusalem Post.

However, heads of state who speak during the high-level opening sessions of the UNGA that take place every September can do so, the representative added.

On Monday, the UNGA heard a report from UNRWA Commissioner-General Philippe Lazzarini about the challenges of servicing 5.7 million Palestinian refugees in Lebanon, Syria, Jordan, Gaza, the West Bank and east Jerusalem.

Lazzarini also addressed allegations of incitement and antisemitism in some of its classrooms and in some social-media posts by its staff.

“I am deeply proud of our education system and its resources,” he said. “UNRWA uses host-country curricula in line with best practices in refugee education.”

“Let’s be clear, UNRWA has a zero-tolerance policy for hate speech, incitement, discrimination, hostility or violence,” he said. “I am, however, acutely aware that we are operating in a highly divided and emotionally charged environment where zero risk does not exist.”

In his 30 years of humanitarian experience, Lazzarini said, he had never seen an organization that had gone to the lengths that UNRWA has to keep in line with humanitarian values.

“We review all host-country textbooks to identify passages that are not in line with UN principles or values,” he said. “Any passages that praise violence, whatever the context, are knocked out.”

Those who attack UNRWA seek to discredit the agency for political reasons, Lazzarini said.

“Politically motivated attacks on our education system and more broadly against the agency are increasing in frequency and in aggression,” he said.

“Those behind these attacks do not have the well-being of Palestinian refugee children at heart,” Lazzarini said, adding that their goal is to delegitimize the agency by eroding the rights of Palestinians.

Erdan, in addressing the UNGA, said his attack on UNRWA was factual and not political.

“UNRWA is part of the problem, not the solution, and the time has come for the international community to hold it accountable,” Erdan said.