The United Nations chief has called for an immediate end to all military activity around Europe’s largest nuclear power plant in southeastern Ukraine, as Moscow and Kyiv blamed each other for renewed shelling.

Ukraine’s Energoatom agency said the Zaporizhzhia complex was struck five times on Thursday, including near where radioactive materials are stored.

In a statement ahead of a UN Security Council meeting called by Russia, Secretary-General Antonio Guterres warned that any damage could lead to “catastrophic consequences” in the region and beyond.

“The facility must not be used as part of any military operation. Instead, urgent agreement is needed at a technical level on a safe perimeter of demilitarisation to ensure the safety of the area,” Guterres said in a statement.

"Any potential damage to Zaporizhzhia or any other nuclear facilities in Ukraine, or anywhere else, could lead to catastrophic consequences."

UN nuclear chief Rafael Grossi told the Security Council that the military activity around Zaporizhzhia was “very alarming” and called on Ukraine and Russia to immediately allow nuclear experts to assess damage as well as evaluate safety and security at the complex because the situation had “been deteriorating very rapidly”.

Grossi, the director general of the International Atomic Energy Agency (IAEA), pointed to shelling and several explosions at Zaporizhzhia last Friday that forced the shutdown of the electrical power transformer and two backup transformers, leading to one of the nuclear reactors being shut down.

He had earlier warned that the situation at Zaporizhzhia, which was seized by Russia in March, soon after the February 24 invasion, was getting more perilous every day.

While the plant in southeastern Ukraine is controlled by Russia, its Ukrainian staff continues to run its operations.

Grossi said statements received from Russia and Ukraine were “frequently contradicted” and that the IAEA could not corroborate the facts unless its experts visited the site, a call that was backed by the United States.

He said Ukrainian armed forces had repeatedly used heavy artillery and multiple-launch rocket systems to shell the Zaporizhzhia plant, including on Thursday.

“The background radiation at the nuclear power plant at the moment is within limits, but if the strikes continue it is only a question of time,” Nebenzia said. “We call on states that support the Kyiv regime to bring their proxies into check to compel them to immediately and once and for all stop attacks.”

Ukraine’s UN ambassador, Sergiy Kyslytsya, accused Russia of using “elaborate plans of deceit, sabotage and cover-ups” to stage the shelling at Zaporizhzhia, including on Thursday, which poses “an unprecedented threat to nuclear security for Ukraine, to Europe and the world as a whole”.

Kyiv has also accused Russia of firing rockets at Ukrainian towns from around Zaporizhzhia, knowing it would be dangerous for Ukraine to return fire.

Ukrainian President Volodymyr Zelenskyy called on Russia to return the plant to Ukraine.

“Only a full withdrawal of the Russians … and the restoration of full Ukrainian control of the situation around the station can guarantee a resumption of nuclear security for all of Europe,” he said in a video address.

The Russian capture of Zaporizhzhia has renewed fears that the largest of Ukraine’s 15 nuclear reactors could be damaged, setting off an emergency on the scale of Chernobyl in 1986. The world’s worst nuclear disaster began with the failure of a routine systems test and took place about 110km (65 miles) north of the capital Kyiv, when Ukraine was part of the Soviet Union.

Zelenskyy said the consequences of a radiation accident at Zaporizhzhia “could be even more catastrophic than Chernobyl, and essentially the same as the use of nuclear weapons by Russia, but without a nuclear strike”.

The Moscow-installed temporary head of the Zaporizhzhia region said on Thursday that the Russia-backed administration stood ready to ensure the safety of any IAEA delegation sent to investigate the situation.

“We are fully ready to accept the IAEA, we will ensure security,” Yevhen Balytskyy said in an interview on Russian state TV. He added that the Kremlin-backed authorities had prepared armoured vehicles for the international envoys.

Grossi said in a statement on Wednesday that he would personally lead an expert mission to inspect the nuclear plant “in the very near future,” without elaborating on the timeline. 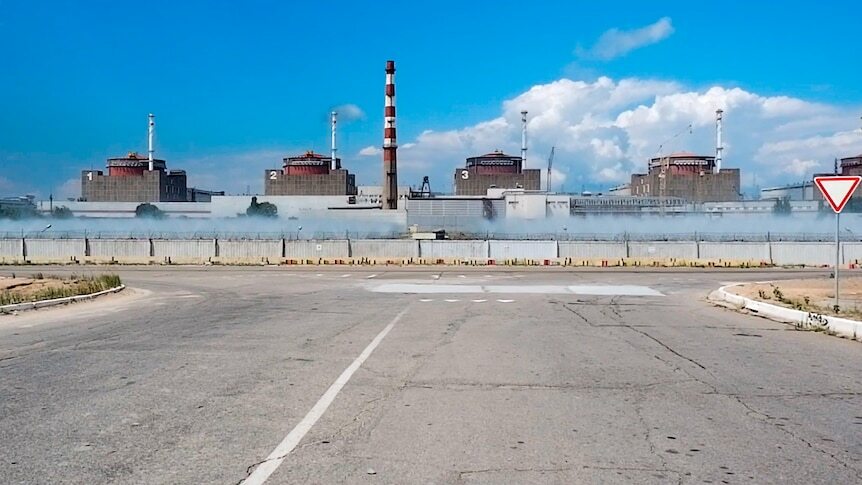 ABC News
From analysis to the latest developments in health, read the most diverse news in one place.
Shelling at Ukraine nuclear plant as UN issues warning

As Ukraine and Russia blame each other for shelling near the Zaporizhzhia nuclear power plant, the UN calls for all…

The UN nuclear chief has called for an end to attacks at the Russian-controlled Zaporizhzhia nuclear plant in south-eastern Ukraine.

Asharq Al-Awsat
One place to find news on any topic, from hundreds of sites.
UN warns of 'grave crisis' at Ukraine nuclear plant