UN chief calls for 'dialogue' with the Taliban, fears for the Sahel

By Philippe RATER and Eleonore SENS 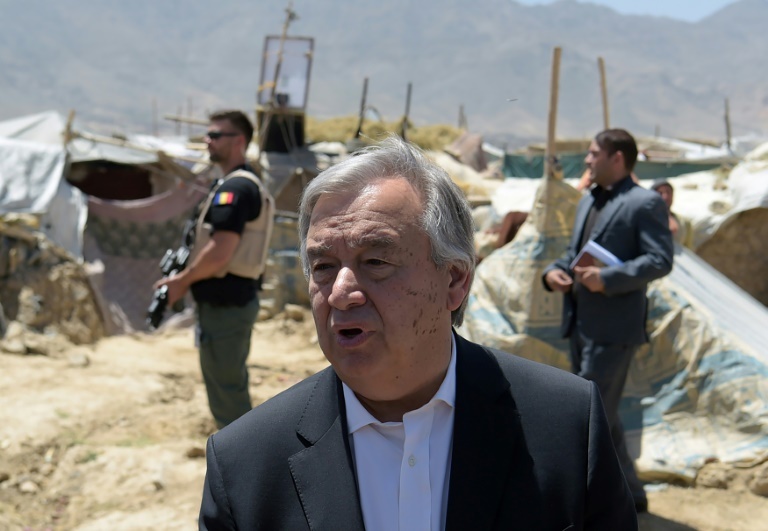 United Nations (United States) (AFP) - UN chief Antonio Guterres pleaded for nations to continue dialogue with the Taliban, during an interview with AFP Thursday, as he expressed fears that the hardline Islamists' return to power in Afghanistan could embolden jihadists in the Sahel.

"Our duty is to extend our solidarity to a people who suffer greatly, where millions and millions risk dying of hunger," added the secretary-general.

Guterres said that the world must avoid an "economic collapse" in Afghanistan.

Without calling for the lifting of international sanctions or the release of Afghan funds frozen around the world, the UN head predicted that "financial instruments" would allow Afghanistan's economy "to breathe."

Guterres said there were "no guarantees" about what might come out of talks but that discussions are a must "if we want Afghanistan not to be a center of terrorism, if we want women and girls to not lose all the rights acquired during the previous period, if we want different ethnic groups to be able to feel represented."

"Until now, in the discussions that we have had, there is at least a receptivity to talk," added Guterres, who does not rule out going to Afghanistan one day if conditions are right.

What the UN wishes is "an inclusive government," where all components of Afghan society are represented, and "this first preliminary government" announced a few days ago "does not give that impression," he added, regretfully.

He said Afghanistan must be governed "in peace and stability, with the rights of the people respected."

Guterres added that the Taliban wants recognition, financial support and sanctions to be abolished.

"That gives a certain leverage to the international community," he said.

Asked about the risks of an Afghanistan-like scenario occurring in the Sahel, the secretary-general said he feared the "psychological and real impact" of what happened in recent weeks.

"There is a real danger.(Some) terrorist groups may feel enthusiastic about what happened and have ambitions beyond what they thought a few months ago," he warned.

He said he was worried about fanatical groups where death "is desirable," with armies "disintegrating in front of" these types of fighters.

"We saw this in Mosul in Iraq, in Mali during the first push towards Bamako, we saw it in Mozambique."

He said it was "essential to reinforce security mechanisms in the Sahel."

"It is not only Mali, Burkina or Niger.Now we have infiltrations in Ivory Coast, in Ghana," Guterres added.

He noted that France will reduce its presence in the region and cited news reports that said Chad wants to withdraw some troops from border areas around Burkina Faso, Niger and Mali.

"I fear today that the response capacity of the international community and the countries of the region are not sufficient in the face of the threat," he lamented.

"This is the reason why I am fighting for there to be an African counterterrorism force with a mandate under chapter seven (which provides for the use of force) of the Security Council and with dedicated funds, which can guarantee a response to the threat level," he added.

The UN chief has been trying for several years to give the G5 Sahel force -- Chad, Mauritania, Mali, Niger and Burkina Faso -- a UN mandate accompanied by collective funding from the world body.

France supports Guterres but the UN's leading financial contributor, the United States, has rejected the move.

"This blocking must be ended.It is absolutely essential," said the secretary-general.