UN Secretary-General Antonio Guterres has warned "a wind of madness is sweeping the globe", pointing to escalating conflicts from Libya and Yemen to Syria and beyond.

At a wide-ranging news conference on Tuesday, he said: "All situations are different but there is a feeling of growing instability and hair-trigger tensions, which makes everything far more unpredictable and uncontrollable, with a heightened risk of miscalculation."

The UN chief also expressed great frustration that legally binding UN Security Council resolutions "are being disrespected before the ink is even dry."

Guterres singled out Libya where he called the current offensives by the warring parties "a scandal" - coming soon after world powers and other key countries adopted a road map to peace in Berlin on January 19 that called for respect for a UN arms embargo, an end to foreign interference in the fighting by rival governments and steps toward a cease-fire.

Libya has been in turmoil since 2011, when a civil war toppled longtime dictator Moammar Gadhafi, who was later killed.

A weak UN-recognized administration that holds the capital Tripoli and parts of the country's west is backed by Turkey and to a lesser degree Qatar and Italy. On the other side is General Khalifa Hifter, whose forces launched a surprise offensive to capture the capital last April from their base in the country's east and are backed by the United Arab Emirates and Egypt as well as France and Russia.

Guterres said the 55-point Berlin agreement has been repeatedly violated by fighting and continuing arms deliveries.

"We are seeing more and more civilians being targeted... migrants in a desperate situation and all the commitments that were made apparently were made without a true intention of respecting them," he said.

The secretary-general also expressed "enormous concern" at the escalation of attacks in Idlib, Syria's last rebel-held province with a population of three million, and said the UN is "particularly worried" that the escalation now includes the Syrian and Turkish armies bombing each other. He again urged a cessation of hostilities "before the escalation comes to a situation that then becomes totally out of control."

As for Yemen, Guterres said he was very encouraged recently to see Iranian-backed Houthi Shiite rebels stop attacking Saudi Arabia and the Saudis, who back the country's internationally recognised government, limiting their military actions. But unfortunately, the last few days have seen "a new escalation," he said, adding, "We are doing everything we can for this escalation to be reversed, and everything we can to create the conditions for a true political dialogue to be re-established."

In Iraq, which has faced mass anti-government protests since October 1 in which at least 500 demonstrators have been killed, the secretary-general called for the human rights of protesters to be protected. The protesters have decried rampant government corruption, poor services and lack of employment and are demanding the overthrow of the political establishment, electoral reforms and snap elections.

Guterres said militias have sometimes been "the worst perpetrators of violations of human rights" and attacks against protesters. It's critical for the government to ensure that the army and policy regain the monopoly on the use of force to ensure the normal functioning of the state, he said. 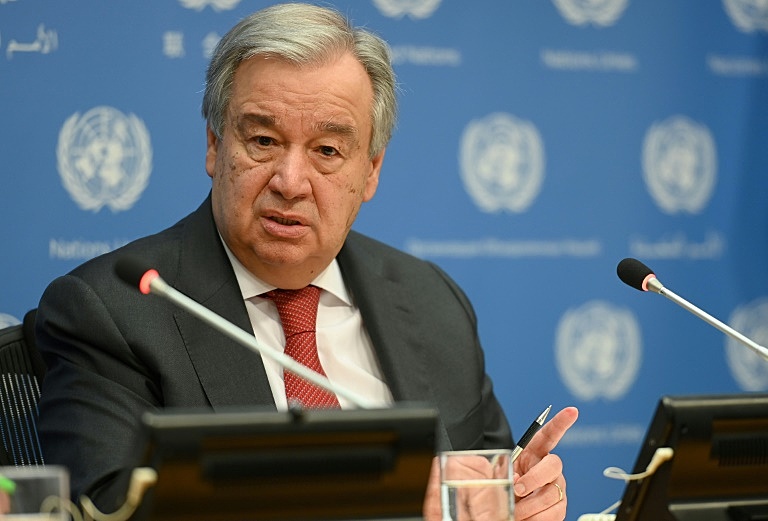 AFP
One subscription that gives you access to news from hundreds of sites
500,000 flee Syrian regime's deadly offensive in Idlib