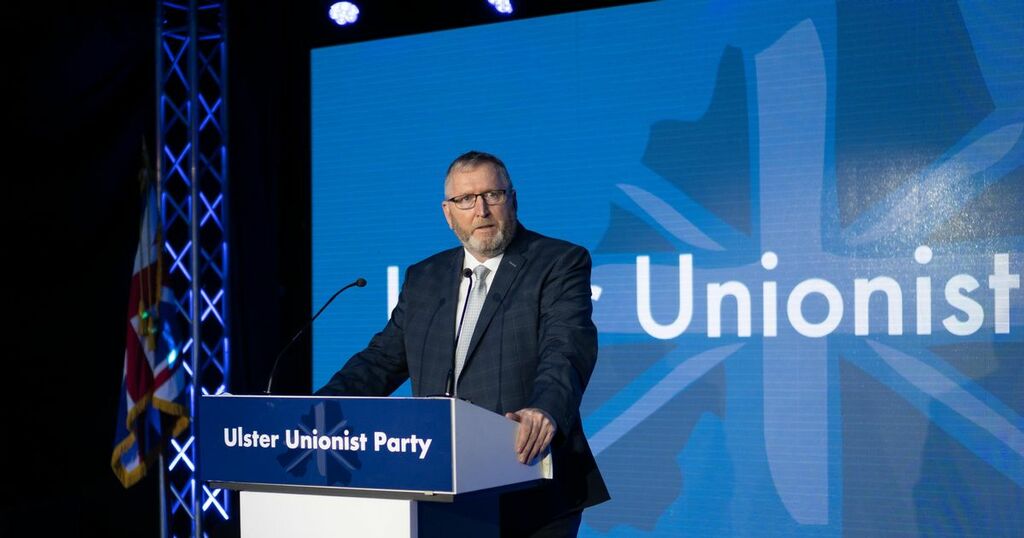 The Ulster Unionist Party is "ready to lead unionism again" with an ambitious outlook of confidence and inclusivity, its leader Doug Beattie has declared.

For too long unionism has been viewed as "negative, backward and angry" despite encompassing many socially liberal voices, the Upper Bann MLA said.

He said Stormont has become "dysfunctional" and a five-party coalition "no longer delivers good government", arguing for the creation of a "power-sharing opposition".

Mr Beattie also announced the UUP would be dispatching representatives to the United States and Europe in a bid to "enhance our message through engagement".

In his keynote speech at the UUP annual conference - his first as party leader - Mr Beattie said his brand of unionism is "confident, positive, progressive and inclusive".

He said: "My unionism does not follow the narrow agenda of some unionist political parties.

"My unionism is rooted in the whole of the United Kingdom and can be found in London, Edinburgh, Cardiff and of course Belfast.

"I am confident to call myself Irish and British, though I accept many more see themselves as Northern Irish.

"My unique identity feels at home whether I am in the Welsh valleys, the Scottish Highlands, English dales or the towns and villages of Northern Ireland."

Mr Beattie told a socially distanced audience at the Crowne Plaza Hotel in Belfast he was "ambitious" for the future of the UUP and wider unionism.

He said: "For far too long it has been viewed as negative, backward and angry. Yet some of the most socially liberal within Northern Ireland are found within unionism and loyalism."

The conference came amid political uncertainty for Stormont after the DUP last month threatened to collapse power-sharing if its demands are not met over Brexit's Northern Ireland Protocol.

Mr Beattie said if an early Assembly election is called "to placate those narrow political self-interests of some then so be it".

"We will stand on our own two feet and promote our vision for a better Northern Ireland."

Mr Beattie said the Belfast Agreement peace deal of 1998 has helped Northern Ireland "forge a new beginning" but 23 years later it is "long overdue an MOT".

He added: "The Frankenstein changes allowed to be made to it at St Andrews removed key parts that had been endorsed by the public at the 1998 referendum".

He said: "Mandatory coalition and other measures that were supposed to be about minority protection have been used and abused for the purpose of frustrating the Executive and the Assembly.

"This will put the electorate in the driving seat and allow them to vote out those not up to the role and vote in those with a better vison for the future."

He added: "And let us end the nonsense that the First Minister is somehow different to the deputy First Minister. One cannot even send a letter without the other signing it too."

Mr Beattie announced the UUP would be dispatching representatives to the United States and Europe.

Former party leaders Mike Nesbitt and Lord Reg Empey will lead missions to the US and Europe respectively.

Mr Beattie said the UUP "must make friends in other countries in order to promote our vison of unionism and move away from the negative viewpoint many have off it".

He added: "We may have left the European Union but we are still Europeans and we need friends in Europe as never before."

On the protocol, he said the DUP was "not solely to blame" but accused his unionist rivals of being "naïve and short-sighted".

Rejecting the deal between the UK and EU, he said: "From a sectarian headcount we are about to begin a protocol headcount which will take precedence over all other issues.

"The protocol must be replaced with a treaty that works for all the people of this island. This means no trading borders North South or East West. There cannot be a border in the Irish Sea."