Kyiv (Ukraine) (AFP) - Ukraine's President Volodymyr Zelensky warned Saturday that only a diplomatic breakthrough rather than an outright military victory could end Russia's war on his country, as Moscow cut gas supplies to Finland.

Zelensky also appealed for more military aid, even as US President Joe Biden formally signed off on a $40-billion package of aid for the Ukrainian war effort.

And he insisted his war-ravaged country should be a full candidate to join the EU, rejecting a suggestion from France's President Emmanuel Macron and some other EU leaders that a sort of associated political community be created as a waiting zone for a membership bid.

"Because, believe me, it will not be compromise with Ukraine in Europe, it will be another compromise between Europe and Russia."

Speaking on Ukrainian television on Saturday, Zelensky said: "There are things that can only be reached at the negotiating table."

The war "will be bloody, there will be fighting but will only definitively end through diplomacy".

"Discussions between Ukraine and Russia will decidedly take place.Under what format I don't know," he added.

But he promised that the result would be "fair" for Ukraine.

After just over 12 weeks of fierce fighting, Ukrainian forces have halted Russian attempts to seize Kyiv and the northern city of Kharkiv, but they are under intense pressure in the eastern Donbas region.

Moscow's army has flattened and seized the Black Sea port of Mariupol and subjected Ukrainian troops and towns in the east to relentless ground and artillery attacks.

The Kremlin has responded by disrupting European energy supplies.

On Saturday, Russian energy giant Gazprom said it had halted supplies to neighbouring Finland as it had not received the ruble payments it was due.

Helsinki had refused to pay its bill in rubles, which Moscow had demanded in a bid to side-step financial sanctions and force European energy clients to prop up his central bank.

In 2021, Gazprom supplied about two thirds of the country's gas consumption but only eight percent of its total energy use.

Gasum, Finland's state-owned energy company, said it would use other sources, such as the Balticconnector pipeline, which links Finland to fellow EU member Estonia.

Moscow cut off gas to Poland and Bulgaria last month, a move the European Union denounced as "blackmail", but importers in some other EU countries more dependent on Russian gas plan to open ruble accounts with Gazprom's bank.

Public support for the alliance has soared following Russia's invasion of Ukraine.

Moscow has warned Finland that joining NATO would be "a grave mistake with far-reaching consequences".Defence Minister Sergei Shoigu said it would respond by building military bases in western Russia.

But both Finland and Sweden are now apparently on the fast track to join the military alliance, with Biden this week offering "full, total, complete backing" to their bids.

All 30 existing NATO members must agree however, and Turkey has condemned Sweden's alleged tolerance for the presence of exiled Kurdistan Workers' Party (PKK) militants.

Turkey would not look "positively" on their bids unless its terror-related concerns were addressed, he warned.

On the ground in Ukraine, the fighting is fiercest in the eastern region of Donbas, a Russian-speaking area partially controlled by pro-Kremlin separatists since 2014.

In Severodonetsk, a frontline city now at risk of encirclement, 12 people were killed and another 40 wounded by Russian shelling, said regional governor Sergiy Gaiday.

"The Russians are using artillery day and night," he said.

In the neighbouring Donetsk region, governor Pavlo Kyrylenko said on Telegram on Saturday that seven civilians had been killed and 10 wounded.

The Russian defence ministry claimed it had destroyed a large shipment of US and European weapons in a long-range missile strike on the Malin railway station west of Kyiv in the Zhytomyr region.

There was no Ukrainian or independent confirmation of the strike.

On Friday, Moscow declared the battle for the Azovstal steelworks in Mariupol -- a symbol of Ukraine's dogged resistance since Putin launched the invasion on February 24 -- over.

Russian defence ministry spokesman Igor Konashenko said 2,439 Ukrainian personnel had surrendered at the steelworks since May 16, the final 500 on Friday.

Ukraine hopes to exchange the surrendering Azovstal soldiers for Russian prisoners.But in Donetsk, pro-Kremlin authorities are threatening to put some of them on trial.

Biden has cast the Ukraine war as part of a US-led struggle pitting democracy against authoritarianism.

The US Congress this week approved a $40-billion (38-billion-euro) aid package, including funds to enhance Ukraine's armoured vehicle fleet and air defence system -- and President Biden signed it into law on Saturday.

Russia meanwhile published a list of 963 Americans, including Biden, Facebook boss Mark Zuckerberg and Hollywood actor Morgan Freeman, who are banned from entering the country.

That followed a similar list drawn up by Washington. 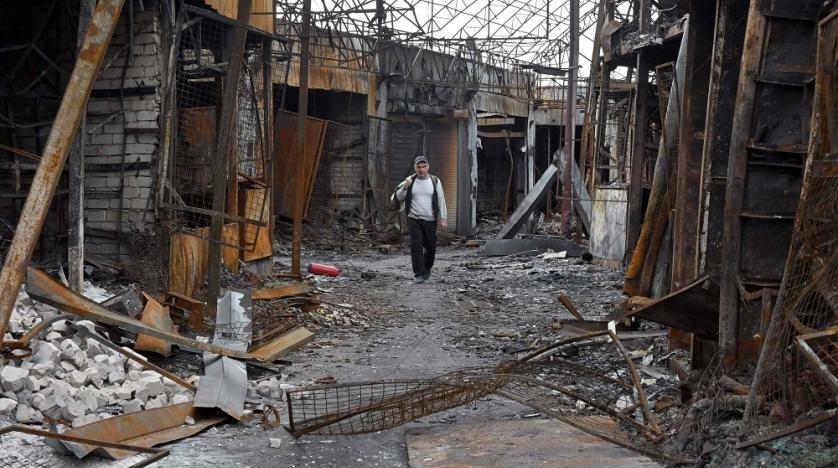 KYIV: Ukraine President Volodymyr Zelensky warned on Saturday that only a diplomatic breakthrough rather than an outright military victory could…