Pro-Russian separatists and Ukrainian authorities on Thursday traded allegations of cease-fire violations along the tense front line separating the two sides, as Western officials said Moscow continued to mass troops along the border of its smaller neighbor.

Representatives of two breakaway Russian-backed and Russian-armed statelets in Ukraine’s eastern Donbas region, known as the Luhansk People’s Republic and the Donetsk People’s Republic, said Ukraine’s armed forces had launched grenades and mortars into their territory.

The Ukrainian government said Kyiv-controlled areas of the Luhansk region came under sustained shelling Thursday morning. A direct hit to a kindergarten in the town of Stanytsia Luhanska injured two teachers, the military said. Shelling also destroyed a house in the village of Vrubivka and hit the courtyard of a high school. There was no immediate information on casualties there, according to the local civilian-military administration.

Such exchanges have occurred regularly in the years since the conflict in Donbas began in 2014, despite a cease-fire agreed to a year later, and have occasionally erupted into wider-scale fighting. But they carry a heightened risk now amid the wider standoff between Russia and the West over Ukraine.

Russia has deployed 130,000 heavily armed troops, effectively surrounding Ukraine on three sides, something Western officials have warned could be a prelude to an outright invasion.

The Kremlin has sent mixed signals in recent days, announcing the drawdown of some of its troops and suggesting Moscow could be open to negotiations with the West to defuse the crisis and address what it says are threats from Western powers to Russia’s security. But Western officials say Russia instead has continued its military buildup around Ukraine.

Officials in Kyiv and the West have warned Moscow could use fighting around the separatist areas as a pretext to move into eastern Ukraine.

At a meeting of NATO defense ministers in Brussels on Thursday, U.K. Defense Secretary Ben Wallace said he expects that such a pretext is part of Russia’s playbook.

“I expect over the next few days more peddling of false stories such as we’ve seen," he said.

In Donbas, Russia fomented a separatist conflict in 2014 and then sent military forces to cut off the Luhansk and Donetsk territories from Kyiv’s control.

In recent days, Moscow has pointed to what it says is Ukraine’s military activity near Donbas as an escalating threat.

Kremlin spokesman Dmitry Peskov told journalists Thursday that activities by Kyiv that the Kremlin describes as provocative “have intensified in the last days," according to Russian state news agency TASS. He added that Ukrainian forces were prepared for an offensive.

“It’s clear that the situation in the Donbas is ramping up," he said. “The situation at the borders of Russia may ignite at any moment."

Western officials believe the Kremlin could point to alleged military action by Ukrainian forces in Donbas as a way to cast any Russian incursion as an attempt to come to the aid of Russian speakers in the area.

“The situation on the line of contact sharply escalated," Donetsk representatives said on the territory’s official website. “The enemy is making attempts to unleash active hostilities."

The Kremlin pushed back on the idea that Moscow is looking for a pretext to invade. “Attempts to shift all the blame for what is happening around Ukraine onto Russia will not succeed," Russian Foreign Minister Sergei Lavrov said Thursday.

He added that “there are no plans for negotiations with Kyiv."

“We have repeatedly warned that the excessive concentration of the armed forces of Ukraine in the immediate vicinity of the demarcation line could pose a terrible danger," he said. “We are watching closely. We will see how the situation develops."

Stanytsia Luhanska, a village inside Ukrainian territory, was shelled with heavy weapons from the occupied territory in Donbas. Civilian infrastructure was damaged, according to the Ukrainian military. “We call on all partners to swiftly condemn this severe violation of Minsk agreements by Russia amid an already tense security situation," said Foreign Minister Dmytro Kuleba, referring to the 2015 accord that ended major combat in the Donbas.

Ukrainian President Volodymyr Zelensky visited the Ukrainian-held part of the Donetsk region Wednesday night, meeting with military and security personnel. Ukraine has raised the alert status of its armed forces and said it has distributed more ammunition to troops on the front lines.

The Kremlin has denied that it plans to attack Ukraine and in recent days Moscow has said it is drawing down some troops and released footage of tanks and armored personnel carriers departing areas such as Crimea. But Western officials have said Russia is continuing its military buildup.

On Thursday morning, a projectile fired by pro-Russian forces hit a kindergarten in Stanytsia Luhanska, Ukraine’s military said. Footage showed a gaping hole in a brick wall and debris in a room decorated with a painting of an elephant and a parrot, with several soccer balls on the floor.

Stanytsia Luhanska, which sits just across a bridge from the city of Luhansk, the capital of one of the two Russia-controlled statelets, is where the only crossing point operates daily between the Russian-occupied territories and the rest of Ukraine. Some 3,000 people use the crossing daily, to visit their relatives in government-controlled areas or to receive Ukrainian pensions and medical services unavailable in the Russian-held regions, such as Pfizer-BioNTech Covid-19 vaccines.

On Tuesday, Russian legislators voted to send a resolution to President Vladimir Putin urging him to formally recognize Donetsk and Luhansk as independent states.

At a press conference on Tuesday, Mr. Putin said he believed the vote reflected the fact that members of parliament had taken into account public opinion, adding that “it’s obvious in this context that the overwhelming majority of people in our country feel sympathy for people in Donbas, support them and hope that the situation would improve dramatically."

The possibility that Mr. Putin could recognize the separatist territories in Donbas keeps the pressure on Kyiv and gives the Kremlin another bargaining chip in his talks with Western leaders.

At the United Nations Security Council, Russia’s ambassador to the U.N. is expected to press Thursday for more autonomy for Russian-speaking separatists in the region. 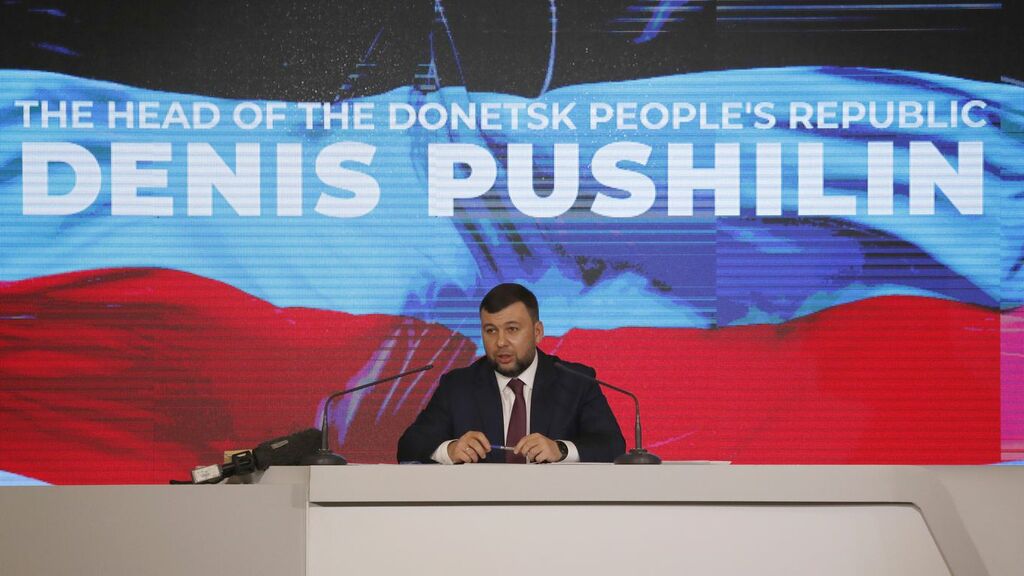 Civilians evacuated from eastern Ukraine as pro-Russia separatists warn of war
The U.S. has warned that Russia is preparing to manufacture a pretext to invade Ukraine.

Axios
One subscription that gives you access to news from hundreds of sites
Ukraine fires mortars on separatist territory in breach of ceasefire, say Russia-backed rebels

Forces from the Ukrainian side were accused of using mortars, grenade launchers and a machine gun

Separatists in eastern Ukraine have announced they are evacuating civilians to Russia, as spiking tensions in the region aggravated Western…

Russian-backed rebels and Ukrainian forces traded accusations on Thursday that each had fired across the ceasefire line in eastern Ukraine,…