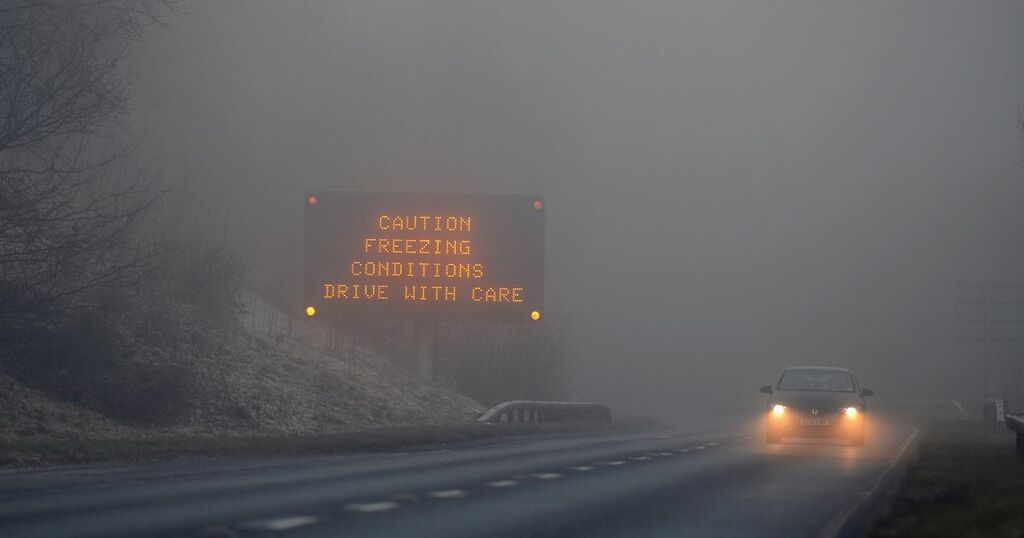 Thick fog threatens travel chaos in parts of Britain across two days with potential disruption to roads, trains and flights, the Met Office has warned.

A yellow weather warning has been put in place from 10pm tonight, lasting until midday on Wednesday.

It takes in the likes of Birmingham, Peterborough and Norwich through the Midlands and East of England to Chelmsford - and dips as low as Taunton in the South West.

The national weather agency says it could mean "slower journey times with delays to bus and train services possible" and a "chance of delays or cancellations to flights".

Airports in the affected areas include London Stansted and Birmingham International.

It comes as the UK faces a barrage of frosty weather with temperatures set to drop below zero and up to five centimetres of snow is expected to fall.

Maps from WXCharts show that the Atlantic pressure system that brought cold weather and snow from Greenland at the start of the month will continue to hit the UK, with temperatures dropping as low as -1C in parts this morning.

Met Office forecaster Alex Deaking said: " In Scotland and Northern Ireland there’s a hint of blue on the charts and so certainly in rural areas and hills there will be pockets of frost.

"Most towns and cities just about staying above but we are in the colder air here further south with the cloud and the rain we are a long way from freezing with towns in the south-west perhaps staying in double digits."

He went on to say: "Temperatures will tumble on Tuesday evening so again that blue hue on the charts suggesting frost before midnight in the Midlands, South Wales and further south will see a frost developing and some fog patches which could be slow to clear on Wednesday," said Mr Deakin.

"More clouds across the North West and the Highlands but for most Wednesday is a fine winters day with some sparkling sunshine and light winds.

"Start with a frost but by the afternoon temperatures ticking up to about the average of 7C or 8C," he added.

One flood alert remains in place today in England in West Somerset.