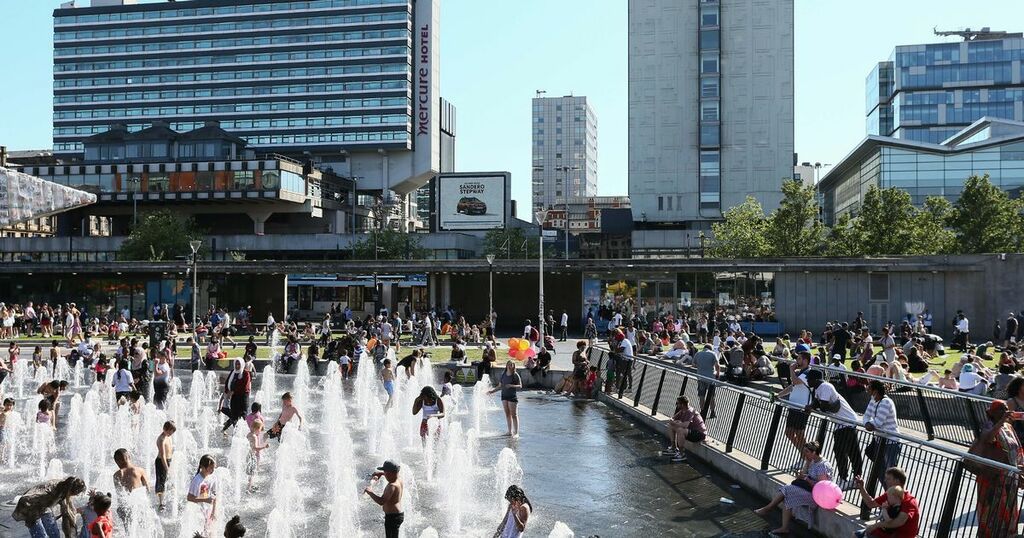 A weather warning for thunderstorms has been issued with this week's heatwave set to make way for unsettled and wet conditions.

Greater Manchester and the UK as a whole has seen bright sunshine and scorching temperatures this week.

Local Twitter forecaster Oldham Weather said the 27.9 degrees he recorded in Chadderton on Tuesday was the hottest September temperature recorded in over a decade.

However, the mercury is set to plummet in the coming days bringing unsettled conditions as a result.

After a cloudy start to today (Thursday) scattered showers, some occasionally heavy, are forecast across the North West this morning.

They are then expected to turn heavier and more frequent in the afternoon with a risk of some thunderstorms throughout the day.

The Met Office yellow warning for thunderstorms comes into effect at 10am this morning and lasts until 8pm tonight with some deluges expected. It covers most of the UK from the north of Scotland, the North West, North East and the southwest of England, as well as Wales and Northern Ireland.

The Met Office say there is a "small chance that homes and businesses could be flooded quickly, with damage to some buildings from floodwater, lightning strikes, hail or strong winds."

Adding: "Where flooding or lightning strikes occur, there is a chance of delays and some cancellations to train and bus services

"Spray and sudden flooding could lead to difficult driving conditions and some road closures."

In Manchester thunderstorms are currently forecast for around 2pm, 5pm and 6pm, however, there are likely to be some sunny intervals.

Temperatures will peak at around 23 degrees, meaning it will still feel warm ad humid, but noticeably cooler than earlier in the week.

After several uncomfortably hot nights, it is expected to be much cooler at bedtime, though still feeling muggy, but with temperatures touching as low as 13C in places.

The forecasted storms are expected to begin easing this evening and to have mostly cleared by the middle of the night.

But Friday is also expected to be unsettled.

There is a chance of some sea fog in coastal areas of the North West with the chance of heavy showers, with again potentially some thunder, developing further inland. Temperatures will again peak at 23C.

In Greater Manchester, these are expected in the late afternoon from around 3pm. And temperatures are likely to be a bit cooler, reaching around 21C here.

It is expected to be generally dry and bright across the region during the weekend and on Monday, though the odd light shower remains possible. Temperatures however will be returning to nearer the average for this time of year.

Across the UK, "settled and largely dry conditions are then expected to continue through the start of next week" the Met Office with some "decent clear and sunny spells" likely.

However, they say it could be cloudier in the far north and North West with rain at times.

It is expected more unsettled from the southwest later in the week, with rain or showers perhaps turning heavy and thundery.

Some regions, especially in the north and east, could remain fine and dry.

Temperatures will be near normal if not rather warm, although some cool nights are likely, especially at first with rural ground frosts possible.

From the end of September into October, the Met Office says that 'confidence is typically low" with regards to the UK long-range forecast.

They say: "The most likely scenario is that conditions remain more unsettled overall from mid-to-late September, beyond which a trend to more settled conditions is probable, especially across the south.

"Within the unsettled period, there is a very low risk of very disturbed, perhaps stormy conditions.

"Rainfall expected to be above average, although may trend to near or drier than average late into September and into early October. Temperatures likely to remain above average throughout."