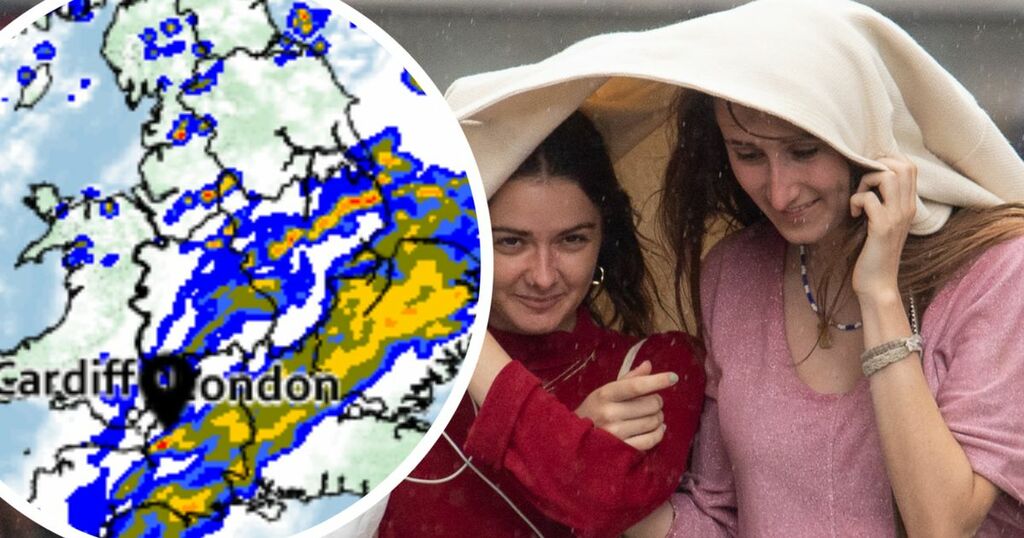 Bristol weather: Met Office says seven hours of heavy rain will lash city ahead of weekend hot spell
Get the washing in!

The temperature is set to hit 20C this weekend

Liverpool Echo
One subscription that gives you access to news from hundreds of sites
Summer is here! South-east set to bask in 24C temperatures today as hot air sweeps in

Brits are looking forward to a mini heatwave with forecasters revealing exactly when the hot weather should return.

Temperatures are expected to reach highs of 25C this weekend after a mid-week washout of showers and rain, according to the Met Office.

The balmy conditions will banish dreary weather on Wednesday which brought grey skies, miserable rain and gusty winds to parts of the UK including London and Birmingham.

Friday will see the mercury soar into the twenties with forecasters predicting glorious 25C sunshine on Sunday.

This would make it the hottest day of the year so far following the blissful Easter weekend which was recorded at 23.4C in St James Park, London.

It comes as a North African blast makes its way towards the UK which could also result in the hottest May temperature on record.

The current record remains at 27.8C and was recorded in Camden, North London in May 1925.

Meanwhile other weather expects predict that the higher temperatures will not arrive until after the weekend.

Meteorologist Jim Dale, of British Weather Services, told the Express: “Temperatures could hit the high 20Cs after next weekend.”

"When we get to Wednesday, [we could see] 25C in London. It continues into the following days."

The return to warmer weather also comes ahead of a mini heatwave which is expected to arrive towards the end of May.

BBC weather forecaster Tomasz Schafernaker said: “Thursday into Friday the high pressure starts to build in so this is where the warmer, sunnier weather is to the south of us.

"We’ve got that more unsettled weather to the north again with hints of rain across parts of western Scotland.

"But which ever way you look at it, it is really starting to settle down by Friday with widespread sunny skies and temperatures 20C in London."

Parts of south England are expected to enjoy the warmest weather with temperatures likely to keep rising into next week.

The next few days will bring warmer daytime weather across much of northern and western Europe with spells of cloud and sunshine lasting up until the weekend.

Over the weekend, the mercury is expected to rise once more with clouds breaking for stretches of time, according to AccuWeather.

Areas along the northwest coast will remain mostly cloudy this week while central and southern regions have the best chance of sunshine.

After Wednesday, the weather is expected to remain dry overall across England, Scotland and Wales.

“Into next week, there is a chance for temperatures to continue trending on the warm side, likely even warmer than this week," said senior forecaster at Accuweather, Alyssa Smithmyer.

"A stretch of warm days that promote outdoor activities may be ahead for residents who enjoy the warmer conditions from 20-25C,” she told the Express.

Looking ahead from May 15 to May 25, meteorologists at the Met office say: "Towards the second weekend, this unsettled weather over the west may spread further eastwards, bringing generally more changeable conditions for most.

"Temperatures will be widely warm or very warm for most through this period, perhaps locally hot in the south and southeast."

And into June, there's the promise of yet more hot weather. The Met Office currently predicts: "A change in weather is likely as we move from May into June, with a shift towards more settled, drier conditions. Showers still remain a possibility in some places, but a drier end to the period is likely for most. We can expect temperatures to continue to be warm or very warm."

Met OfficeUnited KingdomAccuWearExpress
Sign up to read this article

Bristol weather: Met Office says seven hours of heavy rain will lash city ahead of weekend hot spell
Get the washing in!

The temperature is set to hit 20C this weekend

Liverpool Echo
One subscription that gives you access to news from hundreds of sites
Summer is here! South-east set to bask in 24C temperatures today as hot air sweeps in