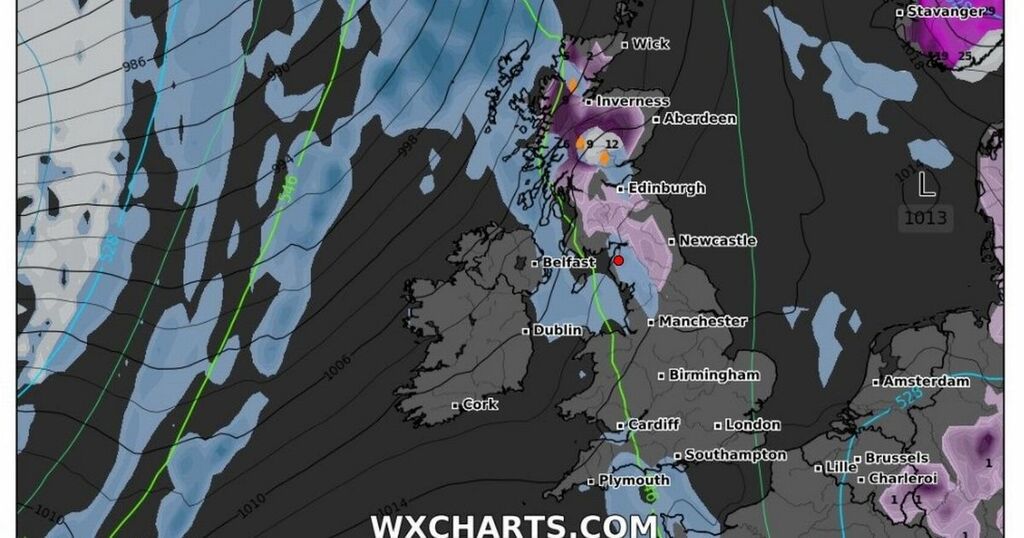 Heavy rain is set to lash the nation sparking a string of flood alerts as ferocious gusts blast the country from today.

And in parts of Scotland as much as five inches of snow is predicted to fall, with Pitlochry in Perthshire predicted to see the largest build-up.

Dreary January will continue today as more wet weather batters the country, with some areas predicted to see gale force winds and some snow to the north.

Temperatures will plunge with forecasters predicting the mercury to drop below zero in parts of northern Scotland, with sub zero temperatures in other northern regions.

Flood alerts have also been issued for nine areas in Wales and southwest England, with those in affected areas advised to look at the Environment Agency site for the latest information.

BBC forecaster Chris Fawkes said of Monday's forecast: “Here’s this area of slightly milder air pushing in off the Atlantic behind this warm front. It’s the warm front that will continue to bring some patches of drizzle just about anywhere - but especially across the west.

“Meanwhile, for west Scotland, there’ll be some heavier rain here and some stronger winds through the course of the afternoon.

“Temperatures will be at their highest across western areas, reaching 13 degrees in Belfast. Across eastern areas not quite so high but still 7-9C is above average for this time of the year.

“Monday night into Tuesday, a cold front pushes southwards - the murky, damp weather will be restricted to southern areas of England and Wales for Tuesday. Sunny spells developing widely behind that with just a few showers in the north west of Scotland.”

Longer range predictions from the Met Office say that January will see 'unsettled' conditions with more colder temperatures and some snow fall particularly in the north.

A few foggy or frosty spots in the east at first. Early brightness in the southeast, where staying largely dry. Elsewhere cloudy with patchy rain, drizzle and hill fog. Milder away from the southeast, very mild in far west.

Rain, drizzle and low cloud continuing across many southern areas where mild. Clearer weather spreads to most northern areas but with strong winds and showers in west and north Scotland.

Sunny intervals and showers across northern Scotland, where remaining windy. Some rain at first in the south but sunnier skies in central UK should follow to most places eventually.

Outlook for Wednesday to Friday:

Settled across many areas with sunny spells, overnight frost and morning fog patches, stubborn to clear in places. Milder and windier over northern Scotland, any rain mainly over western hills.