UK weather: Exact date 23C warmth to return after month's worth of rain falls in hours 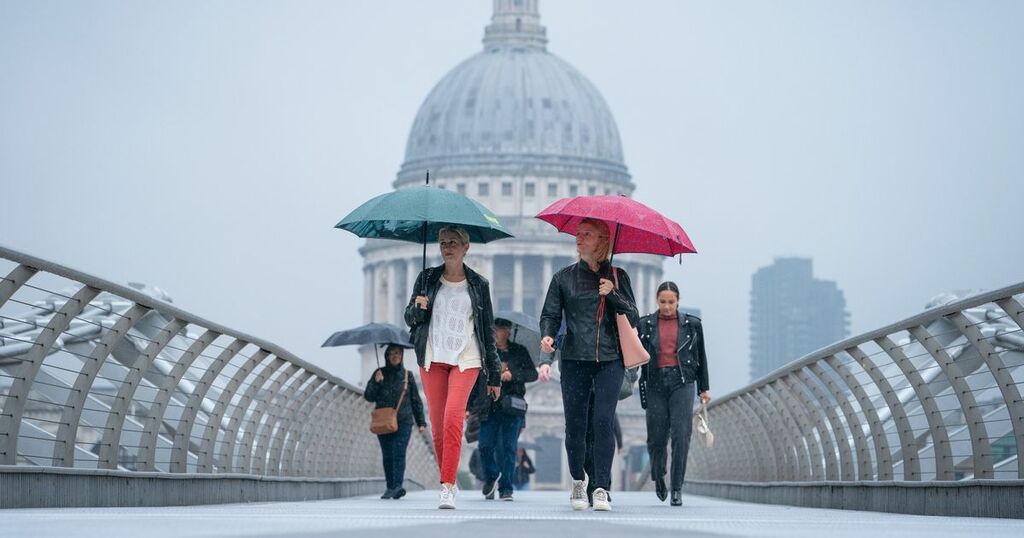 The country is braced as forecasters predict areas could be battered by almost a month's worth of rain in just a few hours.

Areas around the country have already been subject to heavy rainfall on Tuesday morning as commuters struggled to wade through the weather and iconic landmarks including Tower Bridge even flooded.

Despite high hopes that we could be in for another heatwave, the Met Office says temperatures will only hit a high of 23 Celsius on Thursday.

The forecaster has also issued a yellow weather warning for rain for parts of the country, which is in place until 9pm on Tuesday.

Forecasters say some areas placed under the warning could be hit with almost a month's worth of rain in just a few hours on Tuesday.

Grahame Madge, a Met Office spokesman said Norfolk's average rainfall for the full month of September is 56mm, but some places across the country could see up to 40mm of rainfall in just one day.

He said: "The weather warning is in place between Dorset and North Yorkshire - it was in place up until Midnight on Tuesday but that has been trimmed down to 9pm.

"We are expecting the heaviest rain over the North Sea. After today, we will start to get a high pressure tomorrow which should slow things down Thursday and Friday.

"It looks more likely that the south of England will be affected by that. It just means that it will provide some rain."

Mr Madge disputed rumours that the country could see another heatwave after the heavy rainfall, instead suggesting that temperatures will not rise rapidly now for the rest of the year, as autumn and winter roll in.

He said: "Temperature wise, we won't see much change. Highs will be in the teens or low 20s, which isn't too bad for September.

"On Thursday, we will see temperatures in the high teens, from 17c to 18C up to 23C in south west London. It will be slightly cooler on Friday. Nothing for apparent heatwave conditions."

Mr Madge added that there is hopes some sun could break through the clouds that will be hovering over the country over the coming days.

The heaviest and most persistent rain on Tuesday is likely to be across parts of Yorkshire and Lincolnshire.

The Met Office's weather warning says: "Heavy rainfall could lead to some disruption, primarily to travel, on Tuesday. What to expect: Spray and flooding on roads probably making journey times longer, with a small chance of road closures, bus and train services may be affected with journey times taking long, flooding of a few homes and businesses is possible."

A spokesman for the Met Office said that today there will be "Outbreaks of heavy rain moving northeastwards across England. Turning warm and muggy as skies brighten across southern England and Wales with some heavy and perhaps thundery showers developing.