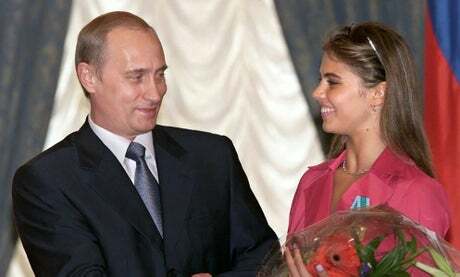 The Foreign Secretary said she was taking aim at the ‘shady network propping up’ the Russian president’s luxury lifestyle.

The big exodus of Ukrainian refugees isn't an accident – it's part of Putin's plan to destabilize Europe
More than 6.3 million Ukrainians have fled their country since Russia first invaded in late February 2022.

InnovationAus
From jobs to a federal ICAC, here are the top priorities for the new Labor government

InnovationAus
Philippines: the challenges ahead for the new president Marcos

The Conversation
From analysis to good news, read the world’s best news in one place
Quad praises Albanese government's higher ambition on climate

The Quad summit in Tokyo has praised Australia raising its ambition on climate change, after Anthony Albanese told fellow leaders…

Alina Kabaeva, a retired Olympic rhythmic gymnast said to have had multiple children by the President, was branded part of Putin’s “wallet” who've amassed wealth worth billions to prop up the President.

Putin’s ex-wife and three cousins were also among 12 alleged "proxies" of the President hit with new asset freezes and travel bans over the Ukraine war.

A UK official said: “These are people who deliberately lurk in the shadows to help Putin hide away his personal wealth.”

The Foreign Office said a “cabal” of the President’s family and friends fund Putin’s lifestyle despite his modest official assets - including a St Petersburg flat, two Soviet-era cars from the 1950s, a trailer, and a small garage.

A UK official said Putin “has amassed a huge fortune” unofficially including a £566m yacht and the £1bn ‘Putin’s Palace’ mansion on the Black Sea coast.

The Foreign Office said Ms Kabaeva is “rumoured to be the current partner of Putin” and “it is reported that he has tried to reduce her visibility since the invasion began.

“For example, a couple of weeks after the invasion, the National Media Group website was updated to remove her name, along with any reference to the Board of Directors.”

Unconfirmed reports suggest the 2004 Athens gold medallist, 39, has been engaged to the Russian leader and has had his children.

A UK official said the National Media Group, where she chairs the board, leads “quite frankly some of the worst outlets for propaganda in Russia at the moment”.

The official added she was a "very significant figure" in sanctioned Bank Rossiya, which owns more than a third of National Media Group, showing a “clear linkage between her and Putin”.

And so was Putin's ex-wife Lyudmila Ocheretnaya - who was First Lady of the Russian Federation before their divorce in 2014.

“Ocheretnaya is a close associate of Putin and obtains a financial or material benefit from this association.”

A UK official said Putin's first cousin once removed, Mikhail Shelomov, has one publicly listed job with an $8,500 salary yet is thought to have acquired assets worth nearly $600m. He is "widely considered to be a probable proxy for Putin", a UK official said.

Other family members sanctioned were Putin's cousin and transport firm director Igor Putin, Igor Putin's son Roman who is the director of his own firm called Putin Consulting, and reported relative and SOGAZ Insurance deputy board chairman Mikhail Putin.

Foreign Secretary Liz Truss said: "We are exposing and targeting the shady network propping up Putin's luxury lifestyle and tightening the vice on his inner circle.

“We will keep going with sanctions on all those aiding and abetting Putin's aggression until Ukraine prevails."

It came after Ms Truss urged G7 foreign ministers, meeting in Germany, to maintain sanctions against Russia until it has fully withdrawn from Ukraine.

The sanctions list has grown to more than 1,000 individuals and 100 entities.

A UK official defended the pace of sanctioning the new round of cronies, saying they “have been trying to hide their light under a bushel for many years” and “you have to take time to build your cases against them”.

The official also said sanctions were starting to bite, with Russia suffering a "huge crash" and the "worst recession since the end of the Cold War”, with several weapons manufacturers suspending production.

The official warned the end of reliance on Russia's energy "has to be a one-way street" - to "remove that lever of influence, frankly, for good”. Britain is set to phase out Russian oil imports by the end of this year but gas imports could take longer.

The Foreign Secretary said she was taking aim at the ‘shady network propping up’ the Russian president’s luxury lifestyle.