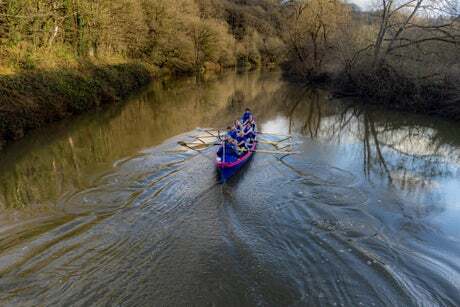 Police review decision to drop case against white woman who ‘hit boy, 12, with paddle’ after social media uproar
Police are reviewing their decision not to prosecute after a 12-year-old boy suffered a head injury having being reportedly hit…

Antwon, 12, was playing with friends in March at Conham River Park, Bristol, when the attacker approached the group and…

The Independent UK
Family's anger after boy, 12, 'attacked with paddle by woman'

Officers were concerned for the 16-year-old's welfare

The Guardian - UK
Teen, 18, left with staples in her head after first ever night out in Wetherspoons

Police have been strongly criticised for not prosecuting a white woman who hit a 12-year-old black boy on the forehead with a paddle so forcefully he needed hospital treatment for a deep cut.

The woman was arrested following the incident at a riverside park near Bristol but three weeks later Avon and Somerset police informed the boy’s family that no further action was being taken because the woman claimed she acted in self-defence and felt “threatened”.

Relatives of the boy, Antwon Forrest, who is autistic, and campaigners questioned why the woman clashed with Antwon rather than white friends he was with and are asking whether race played a part in the decision not to press charges. The force has since said it has initiated a review of the case.

The boy’s father, Tyran Forrest, who is mixed race, said: “If it was me that had hit a white child, I would be in jail right now. I was devastated when I got the letter from the police saying they were taking no further action. I had to tell Antwon she was getting away with it.”

Antwon’s head was so badly cut it had to be glued together and he has been left with scar tissue and a lump. His father said: “He was so upset. I’ve brought him up to be brave so he tried to take it on the chin. He’s trying to get on with his day to day life but he’s affected.”

The incident took place at Conham River Park in south Gloucestershire on 26 March when Antwon met a group of friends on a warm day for a birthday party.

Tyran Forrest, a builder and driver from Stockwood, south Bristol, claimed some of the children – but not Antwon – were throwing mudballs at passing boats including one being paddled by the woman, who works for a car dealership.

What followed allegedly involved some pushing and shouting and ended up with Antwon being struck by the woman with a paddle, and, as Tyran Forrest said: “My son was standing there, blood pouring down his face.”

Tyran Forrest was called and asked the woman what happened. He claimed that: “She said she had seen red and didn’t mean it.” The police arrived and arrested the woman. “They told me she had admitted it,” he said. Antwon gave a video interview explaining what had happened.

Asked why he thought Antwon rather than his white friends had been hit, Tyran Forrest said: “It seems a bit suspicious that she went for him. People can look at it how they want.”

On 14 April a letter arrived telling the family: “The case has been reviewed and unfortunately the decision has been made to take no further action.”

It continued: “The main reason is that during interview the suspect raised a possibility for self-defence. By this we mean that the suspect admitted pushing Antwon and when pushing him she had the paddle in her hand and this contacted with his head. The suspect claimed she pushed Antwon away because he challenged her and she felt threatened by him and the surrounding group.”

There was an outcry after Antwon’s family posted the image of his head wound and the letter on social media. Patricia Daley, of Black Protest Legal Support, had called for the police to look again at the case. The ex-boxer Ashley Theophane wrote that he was not surprised by the police response.

In a statement, Avon and Somerset police said the incident was taken seriously and a woman was arrested and interviewed. It added: “A realistic prospect of a conviction was not made out from the available evidence following the investigation. Since becoming aware of the injured boy’s family’s concerns through social media, officers have been in touch with them and initiated a review.

“This review will be carried out by an experienced detective sergeant, with oversight from a senior officer. It is being monitored by the office of the police and crime commissioner and the intention is to identify appropriate independent scrutiny so that our communities can have confidence in the outcome.”

The Guardian attempted to contact the woman through her workplace but received no reply.

Police review decision to drop case against white woman who ‘hit boy, 12, with paddle’ after social media uproar
Police are reviewing their decision not to prosecute after a 12-year-old boy suffered a head injury having being reportedly hit…

Antwon, 12, was playing with friends in March at Conham River Park, Bristol, when the attacker approached the group and…

The Independent UK
Family's anger after boy, 12, 'attacked with paddle by woman'

Officers were concerned for the 16-year-old's welfare

The Guardian - UK
Teen, 18, left with staples in her head after first ever night out in Wetherspoons