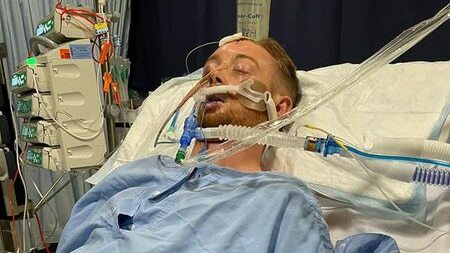 Friends and family said Danny Hodgson, an Edith Cowan University soccer club star and 2020 Football West Golden Boot winner, was leaving the city with teammates when he was punched from behind without warning near Perth Train Station at about 1:55am.

He was taken to hospital with significant head injuries and remains in intensive care fighting for his life.

Detectives on Wednesday afternoon charged a 15-year-old boy over the attack.

Police say Mr Hodgson fell backwards after he was punched and the boy fled the scene without making any attempt to help.

The teenager is due appear in Perth Children’s Court on September 22, charged with one count of grievous bodily harm.

Parents desperate for flights to Perth

Mr Hodgson's parents live in the UK but have reportedly been granted permission to enter WA to be by their son's bedside.

But Nicola and Peter Hodgson have so far been unable to secure a flight due to the limited number of international arrivals allowed into the state.

They are now desperately trying to find an airline that can accommodate them and fly them to Perth.

"We have been in touch with all the airlines and have hit a brick wall, and it's looking like we are going to struggle to get a flight anytime soon," Mrs Hodgson said in a social media post.

"Danny is full of life and has a heart of gold, he is the most kind, gentle and positive person I know who has a passion for life and football."

ECU Joondalup head coach Kenny Lowe, a former Perth Glory coach, has joined those appealing to airlines to find a flight for the Hodgsons.

"Danny is a great player, but more importantly he is a great bloke who is extremely popular with his teammates," he said in a statement.

"We are wrapping our arms around him, his girlfriend Jess and their families and giving them as much strength and support as we can.

"We need to get his mum Nicola and dad Peter on a flight so they can get over to Perth and be with Danny as he faces this challenge."

"He is well liked by everyone, which is shown by the response we got this morning," he said.

"My phone has gone crazy with people [wanting to] lend a helping hand and seeing what they can do to help him and his family out.

Mr Healing said he was hopeful Danny's parents would secure a flight on Thursday.

He also set up a crowd-funding page which has so far amassed more than $20,000 in donations in just two hours.

He won a premiership and was the leading scorer in the National Premier League Western Australia in his first season at the club.

WA Health does not issue exemptions from quarantine for international arrivals, but in rare circumstances people have been allowed a carefully controlled visit with a critically ill relative.

The ABC has previously spoken with people in quarantine who have been allowed a brief visit lasting less than an hour, in full PPE, using specialised vehicles to travel to and from hotel quarantine.

"He seemed to be okay Sunday … he was awake and talking and then Monday morning they did a (scan) and rushed him in for an operation," he said.

"He was making slight progress yesterday then backtracked on that overnight.

"No one knows any information at the moment regarding the long-term effects, it's not a short-term process I don't believe.

"All of his friends and the soccer community are banding together to try and help as best we can."