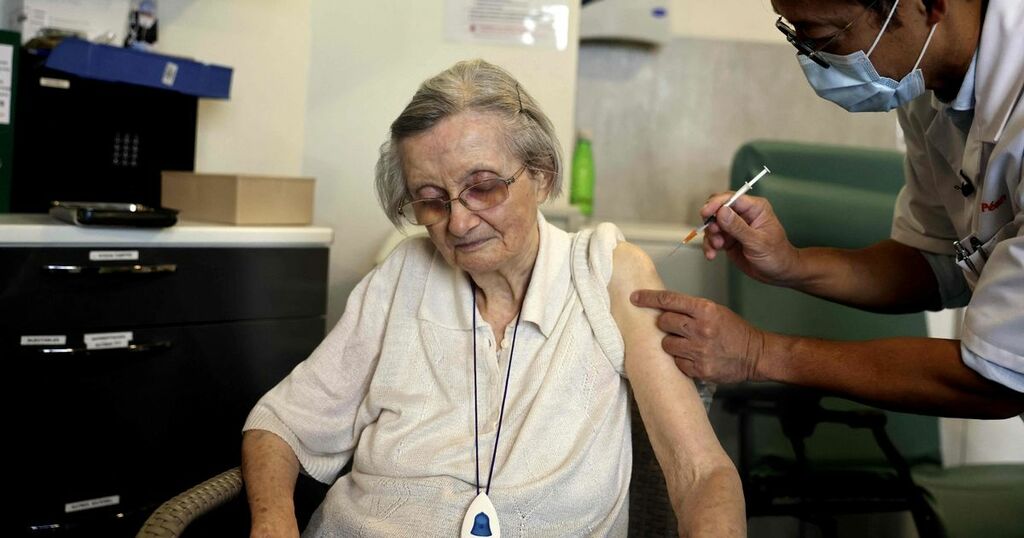 After months of waiting, the UK can now kick-start a Covid booster vaccine campaign to stamp on a fourth wave this winter.

More than 30million Brits will get a third dose of the jab, usually Pfizer even if they had Moderna or AstraZeneca the first time.

This includes all over-50s, NHS and care staff and younger people with underlying health conditions.

Deputy Chief Medical Officer Jonathan Van-Tam said experts were doing “the maximum we can” to prevent Covid deaths until Spring.

He told a No10 press conference jabs have already prevented 24million cases and 112,000 deaths, adding: “I don’t know if many of you are used to crawling into small tents on mountainsides.

“But if you do so and you know a storm’s going to come up in the night, it’s better to put some extra guy ropes on there and then, than it is to wait until it’s the middle of the night, it’s howling with wind and rain, and you’ve then got to get out your tent and make your tent secure and by the time you crawl back in you’re soaking wet”.

So who will get boosters, when, and why?

Who will receive a Covid booster vaccine?

Approximately 32million people in the UK will be offered a booster vaccine.

These are all the same people who were in the first phase of the original vaccine rollout between December and March.

And they’ll get the booster in the same order as they got their original dose. These people are:

Who will not receive a Covid booster vaccine?

The vaccine boosters will not go to healthy under-50s.

Not only do healthy younger people get less sick from Covid - they also have a stronger immune response to the jab itself, the JCVI said.

However, the JCVI will still look at whether healthy under-50s should get a booster, at a later date, and are expected to publish advice when more data is available.

There is also a change since the JCVI’s interim advice in June. Back then, the JCVI said all over-16s who would normally be offered a flu jab could get a booster - even if they weren’t in priority groups the first time round.

This recommendation has now been removed from the final advice. However, it’s thought the vast majority of people who’d be offered a flu jab are in existing Covid priority groups anyway.

When will I get my booster vaccine?

The government has accepted the JCVI’s advice and boosters will start rolling out next week.

Reports suggest the government is aiming to provide the entire booster programme and wrap it up by Christmas.

You’ll become eligible for your third “booster” dose exactly six months after you had your second dose.

So if your second dose was on April 17, your third dose can be given from October 17 onwards.

You should come forward promptly after this deadline passes if you can. JCVI Covid-19 chair Prof Wei Shen Lim said: "Try to find a sweet spot between going too soon and too late".

However, the NHS will contact people directly to let people know it's their turn.

Will I get a flu vaccine at the same time?

Yes, where that is possible.

The JCVI and MHRA agreed it was safe for people to receive flu and Covid vaccines at the same time, and it eases the strain on NHS logistics.

People are likely to get one jab in each arm where this happens.

Officials are worried about a vast winter wave of flu, given immunity is lacking after last year’s lockdowns suppressed the disease.

But Deputy Chief Medical Officer Jonathan Van-Tam also said it won’t always be straightforward logistically to get both jabs at once.

What brand of vaccine will I get?

The JCVI has recommended that everyone getting a booster receives Pfizer wherever possible - regardless of what their first two doses were.

So whether you had Moderna, Pfizer or AstraZeneca - you’ll get a full dose of Pfizer for your third dose where possible.

Moderna can be used for a booster, and where this happens, it will be given in a half dose on scientific advice that it still works very well.

AstraZeneca is not being recommended for a booster because scientists have decided mRNA technology - used in Pfizer and Moderna’s jabs - is preferable for the booster campaign.

They based this on research including the COV-Boost vaccine trial, which studied the use of seven different jabs.

Those who have an allergy to an mRNA vaccine can still get AstraZeneca as their booster, though.

Will using Pfizer slow the rollout down?

Pfizer is one of the more in-demand brands of vaccine around the world. However, sources insist the preference for this make of vaccine will absolutely not slow down the delivery of boosters in the UK.

Will there be a booster programme every six months now?

JCVI Covid-19 chair Prof Wei Shen Lim said: "This advice does not imply there will be a recurrent booster programme every six months."

He stressed it’s to protect the public while we’re in a Covid surge nationally, and further advice on what to do will be issued later when we're in "steady state" with lower background cases.

What if I’ve not had the jab at all yet?

Government advisors stress that people who’ve not yet been vaccinated at all are the absolute priority.

If you’ve not had your first dose, it is not too late - come forward and the NHS will be able to give you a two-dose course of the vaccine.

Is this separate to children’s jabs?

The UK's four Chief Medical Officers recommended a "universal" rollout of the Pfizer jab to children aged 12 to 15 - after judging it will help prevent schools chaos over winter.

All UK over-16s are already able to get the jab, with 16 and 17-year-olds getting an "initial" one dose instead of two. Under previous rules, 12-15s could only get it if they were in vulnerable groups.

Kids’ jabs are due to begin on school grounds from September 22. Parents will be asked to give consent, though children who want a jab despite parents’ objections - or vice versa - can overrule their families.

Is this separate to “third doses” for the immunosuppressed?

Around 500,000 Brits with compromised immune systems will get a third dose of the vaccine, but this is separate to the booster programme.

They are being offered third doses because the first two are less likely to have worked, due to their immune systems.

This includes people with conditions which mean their immune system does not function properly, such as those with HIV or blood cancers such as leukaemia.

Others eligible will be people with solid cancers, severe autoimmune diseases and organ transplant recipients who were on drugs that suppressed their immune system at the time of earlier doses.

People in these groups can still get a booster jab - in other words, they’ll be able to get a fourth dose if they want.