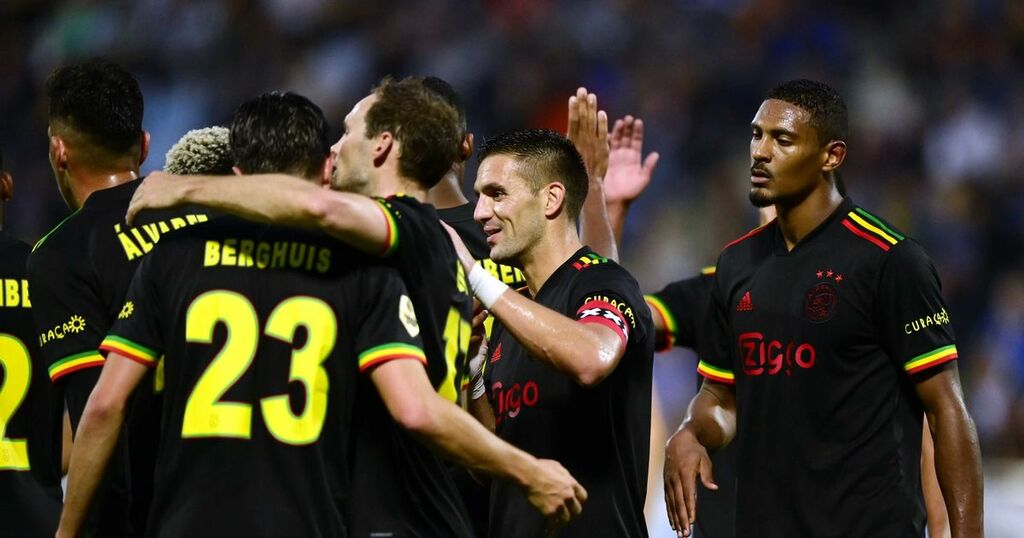 Ajax have been banned from wearing their Bob Marley-inspired kit in the Champions League by UEFA.

The original design, a fan favourite which sold out within days of its release in August, is claimed to have imagery that goes is at odds with the European football governing body's rules.

Marley's tune 'Three Little Birds' was adopted by Ajax fans for over a decade and the strip was introduced to much fanfare ahead of 2021-22 .

Ajax wore the shirt for the first time in their Eredivisie victory over PEC Zwolle on Saturday as they chase league leaders PSV Eindhoven.

But there was an alteration to the Dutch giants' original design, now explained by the Amsterdam club.

Via website Ajax Life for the reason, the club stated: "The European Football Association [UEFA] sees it as a different expression than the club logo, logo clothing sponsor or sleeve sponsor. Other expressions are not allowed."

The shirt had three birds stitched on its back below the collar in homage to the reggae classic - one red, one yellow and one green.

Eagle-eyed viewers soon realised during the 2-0 weekend win on the road that the birds had been removed from the players' versions.

It will come as a blow due to its popularity, with Ajax Commercial director Menno Geelen revealing last month that it had sold four times more than any other strip.

"We had already responded to the interest by purchasing much more than ever," Geelen said. "A record number of shirts were sold in one day.

"This shirt is sold at least four times more than any other Ajax shirt. It’s unique."

Ajax are planning to predominantly wear the shirt in European fixtures this season, whether that be in the Champions League or Europa League, depending on where they finish in their group, containing Besiktas, Borussia Dortmund and Sporting Lisbon.

The fan base's liking to the tune started in August 2008 following a pre-season friendly at Cardiff City.

Supporters were asked to remain in the stands after the game and Three Little Birds came over the sound system in Wales.

Now the Johan Cryuff Arena faithful sing the song at every match.

Marley's family have appreciated the adoption, with daughter Cedella Marley saying: "I am beyond touched that Ajax has taken Three Little Birds and made it their anthem.

"Stories like this warm my heart and show how impactful songs like Three Little Birds can be," she explained.

"Soccer was everything to my father and to use his words, 'football is freedom'."

The competition kicks off on Tuesday, with BSC Young Boys welcoming Manchester United and Red Bull Salzburg travelling to face Sevilla in two the early matches at 5:45pm UK time.

Liverpool will welcome old UCL foes AC Milan at Anfield on Wednesday, who have returned to the Europe's elite tournament after a eight-year absence.

Ajax head to Portugal to play Sporting that evening at 8pm.

Erik ten Hag's men - including former Southampton midfielder Dusan Tadic and West Ham striker Sebastien Haller - will be hoping to replicate their Champions League heroics from three years ago when they reached the semi-final.