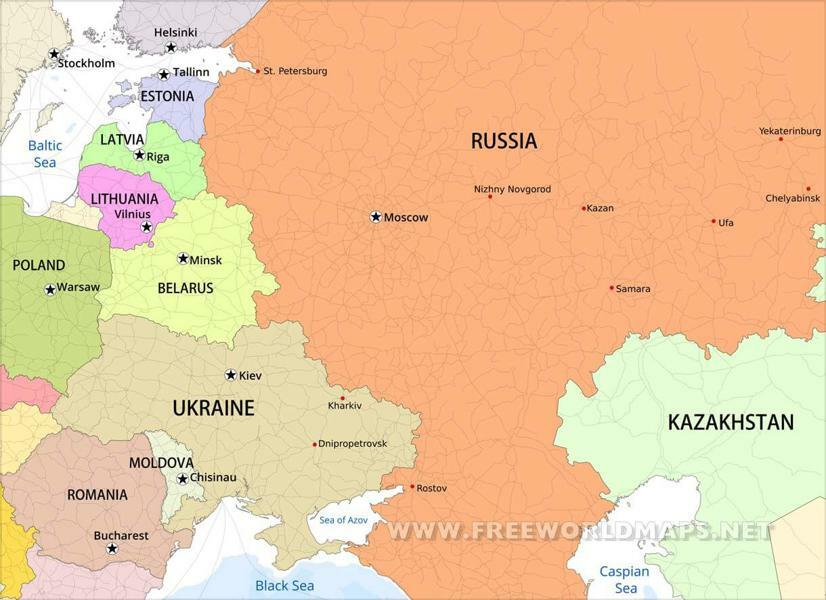 America’s military has become obsessed with China, to the exclusion of other dangers that could prove more urgent during President Biden’s time in office.

Concern about China’s rise is certainly justified, but Beijing’s main geopolitical objective right now is securing control of Taiwan, which it views as a wayward province.

Once you get beyond the vulnerability of that island nation, geography limits the scope of what Beijing’s military can do in its own neighborhood; oceans, mountains and deserts would impede any move to seize adjacent territory.

If only that were true in Eastern Europe, where geography enables a resurgent Russia to threaten half a dozen nearby states, one of which—Belarus—is already succumbing to Moscow’s strategy (see map).

Belarus, a nation of 9 million, has served since the Cold War ended as a buffer between the rest of Europe and the main weight of Russia’s military, but recent military exercises suggest that the buffer is disappearing as dictator Alexander Lukashenko tries to preserve his hold on power.

Lukashenko allowed Moscow to deploy large military forces in his country during September’s Zapad-21 exercises, and it isn’t clear that they all will be leaving.

Among other things, the Russians have stationed S-400 surface-to-air missiles within walking distance of the Polish border, which effectively put the Poles in a crossfire between air defenses located in Belarus and Russia’s Baltic enclave of Kaliningrad.

The collapse of Belarusian autonomy is a breakthrough for Vladimir Putin’s campaign to reassemble Russia hegemony in the region, a plan that has already resulted in the seizure of Crimea on the Black Sea, a seven-year separatist revolt in Ukraine’s eastern industrial heartland, and continuous pressure on the three Baltic states of Latvia, Lithuania and Estonia.

Russian ethnic minorities are a significant portion of the local population in each of these countries—they were all part of the Soviet Union—meaning Moscow is in a position to continually stir up dissension and wage a campaign of low-level subversion.

Poland sees the emerging danger of Russian encroachment and has moved to purchase advanced weapons such as the F-35 fighter and Abrams tank, but it isn’t so clear that Washington grasps the challenge posed by Russian adventurism.

At the moment even the U.S. Army is absorbed by the China threat, even though Eastern Europe is the place where its capabilities might most be needed in the years ahead.

As for the U.S. Air Force, the other key American player in NATO’s central region, its current focus was aptly summed up by a recent headline in Air Force magazine: “USAF’s Three Priorities: China, China, China.”

The headline actually applies to the entire joint force, which is still modernizing along the lines dictated by the Pentagon’s 2018 National Defense Strategy.

That document warned that great-power rivalry had returned in the form of growing Russian and Chinese military capabilities, and that the U.S. must redirect its own military preparations to meet the challenge.

The strategy is largely classified, but there isn’t much doubt that its main focus is China.

All the U.S. military wants to talk about anymore is how it is posturing to deter and/or defeat China.

Having faltered in its efforts to subdue Islamic insurgents destabilizing Southwest Asia, Washington is eager to refocus on threats that ‘think like us.’

Washington went through a similar transition in the aftermath of the Vietnam debacle, when America’s military decided it should be mainly concerned with the Soviet conventional challenge in Europe.

This time around the focus is on China’s conventional military threat, but the eagerness to put counter-insurgency warfare in the rearview mirror is no less palpable.

Unfortunately, past experience tells us that the greatest danger seldom comes from the quarter where we are most prepared to win.

Consider the following chart that I presented to an industry offsite last week, detailing the biggest strategic surprises of the last two generations.

The chart indicates that about once every five years, Washington is confronted by a colossal security challenge for which it is ill-prepared.

It also indicates that a large portion of these shocks have been directly or indirectly tied to Moscow—not because it is fundamentally more aggressive than Beijing, but because its circumstances are so much different.

Once we get beyond the threat posed by Beijing to Taiwan, a fairly simple and easily remedied problem, the biggest geopolitical challenges going forward are mostly tied to Russian designs in Europe.

The Obama administration completely missed the enduring interest of Moscow in dominating Europe, and thus was unprepared to cope with Russia’s 2014 annexation of Crimea.

Washington’s efforts to dissuade Moscow from putting pressure on Ukraine since then have not borne much fruit, and more importantly, U.S. elites have failed to grasp Russia’s grand plan for reestablishing dominance in Eastern Europe.

At the moment Poland is the main bulwark against this resurgent expansionism, which will become more apparent as Belarus descends into the status of Russian puppet state.

But if the Biden administration’s National Defense Strategy fails to see the danger and remains obsessed with the Middle Kingdom, then we shouldn’t be surprised to see Russian influence gradually penetrate to the heart of Western civilization during the coming years.