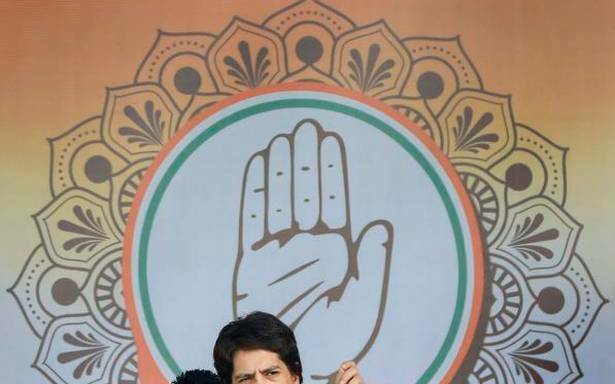 On a day when the Election Commission (EC) barred all physical rallies for the next week in the five poll-bound States because of rising COVID cases, Congress general secretary Priyanka Gandhi Vadra kicked off her first virtual campaign for the upcoming Uttar Pradesh Assembly polls.

In her first online interaction on Facebook with women and girls from U.P. on Saturday, Ms. Vadra said she will not allow women to be ignored and asserted that “women are the centre of the political discourse in the State”.

As with Ms Vadra’s online interactive session, the Congress is working on a plan to reach the voters by adhering to all COVID protocols.

The party is said to be preparing ‘virtual studios and green rooms’ at the party headquarters as well as State headquarters for leaders to address the virtual and hybrid rallies.

However, the party is likely to rely on door-to-door campaign and small corner meetings to circumvent network and connectivity issues in remotes areas and hilly terrain in States like Uttarakhand.

“We are hopeful that the EC would allow nukkad sabhas that is among the most effective way to reach the voter as well as follow protocols with a crowd of about 100 people,” Mr. Surjewala told reporters.

Just before the EC announced the seven phase poll for UP, Ms Vadra, who is the Congress in-charge for UP, held an interactive session on Twitter and Facebook under the banner of her flagship campaign, Ladki Hoon, Lad Sakti Hoon, to focus on women-centric issues.

Ms Vadra said women constitute half of the population and she personally favoured giving 50% of party tickets to them.

“In the past one month’s time, all political parties in U.P. have started talking about women issues. Be it the SP, BJP or AAP, you can see they are suddenly making announcements for women and this is a great achievement,” she said.

Citing New Zealand Prime Minister Jacinda Ardern and her grandmother Indira Gandhi as her inspirations, the Congress general secretary recounted the fearlessness of her grandmother and the former Indian prime minister.

On the Congress promise of 40% tickets for women, she said, “It is a step whose time has come. It is time for women to stand up and understand that we are 50%. Forty per cent is not right enough, 50 is the right percentage.”

Asked how she would counter hate campaigns and negativity, she said, “Negativity can only be dealt with love, compassion and positivity”.

Stating that she was in isolation for a week (after a relative and staff member tested positive), Ms. Vadra urged patience from the online users as she was using the platform for the first time.