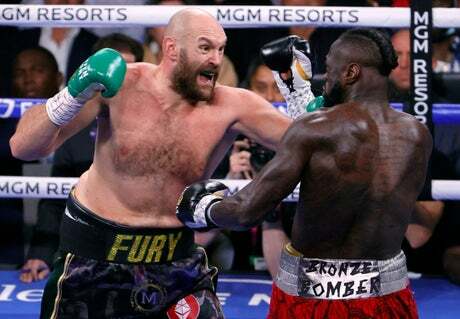 Tyson Fury is in line for a homecoming fight against Dillian Whyte in the UK before taking on the winner of Oleksandr Usyk and Anthony Joshua.

Fury had already mapped out his next five fights to his team ahead of beating Deontay Wilder in a thrilling 11th-round stoppage in Las Vegas on Saturday night.

With Usyk and Joshua having agreed their rematch for February/March, Fury, having been inactive for 20 months before facing Wilder, Fury wants to box again rather than waiting for the outcome of that bout.

Whyte faces Otto Wallin, who pushed Fury for 12 rounds in their fight back in September 2019, on October 30. Should he come through that, he is now the WBC’s mandatory challenger for Fury, who is keen to sign up to that fight.

In the wake of beating Wilder, Fury said: “Before I start thinking about other men, I am going to bask in my victory.”

But promoters Bob Arum and Frank Warren are expecting Fury to pester them for a date and opponent for his next fight before the current week is out.

If Whyte is successful, Fury in early 2022 looks a likely option with London in the reckoning to host a Fury fight for the first time in six years and his first bout in England since June 2018.

Warren readily admitted that Fury-Joshua remains the biggest blockbuster fight despite the threat that Joshua might again lose to Usyk in their rematch and have no belts on the line.

“It’d be an ideal world for Anthony Joshua not to go for the rematch so we can just get straight to it,” he said, although that effectively looks a done deal, again most likely to take place on British soil.

As for Fury’s immediate plans, Warren added: “No one’s made any decision. He needs a decision after this. There’s no rush. But he’s planned out five fights. He’s a fighting man and lives and breathes boxing. That’s his life.

“I would love that homecoming more than anything for the British fans. Can you imagine it? Tyson sells out any stadium in Britain, easy. The fans will come out for him. He deserves that hero’s homecoming now.”

After his 11th-round stoppage of his American opponent, Fury declared himself “the greatest heavyweight of my era” and was adamant he would “beat any man in history”.

And Warren argued there was no one in the heavyweight division — be that Joshua, Usyk or Whyte — that could now topple the WBC champion.

Of those with potential to beat him, Warren added: “On what I’ve seen it’ll have to be another Tyson Fury as there’s no one that can do it right now.”