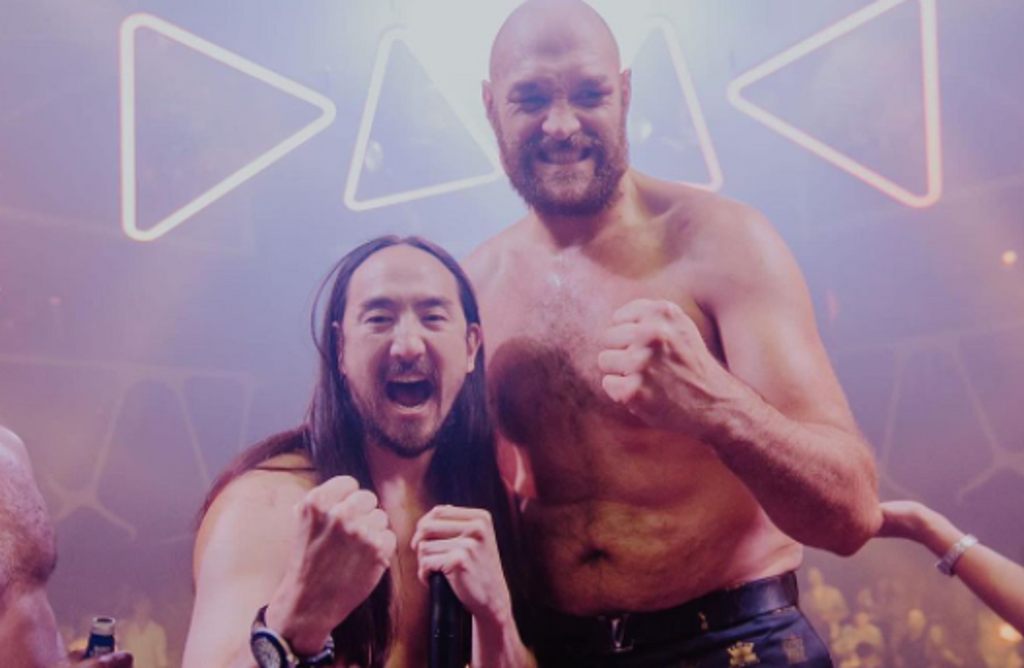 Tyson Fury partied into the night after knocking out Deontay Wilder in his heavyweight world championship fight in Las Vegas.

The ‘Gypsy King’ defended his WBC belt after defeating Wilder for the second time, although he had to climb off the canvas twice in the fourth round before surging to victory.

Fury knocked Wilder out in the 11th round of the contest, in what was one of the most dramatic heavyweight title fights in boxing history.

After his victory at the MGM Grand, Fury joined a crowd his supporters for a party at the Hakkasan nightclub in the city.

The 33-year-old was accompanied by wife Paris and bother Tommy Fury and was seen on stage with DJ Steve Aoki.

Fury also sang to the crowd, belting out renditions of ‘Sweet Caroline’, ‘American Pie’ and ‘We are the Champions’.

The WBC heavyweight champion reportedly partied until 3am at the nightclub after successfully defending his unbeaten record and carried on the celebrations at a pool party with Aoki the next day.

Fury declared himself the “best fighter in his era” after defeating Wilder and is now set to face challenger Dillian Whyte, providing the Briton defeats Otto Wallin this month.

A unification bout against WBA, WBO and IBF champion Oleksandr Usyk could follow, but the Ukrainian faces a rematch against Fury’s long-time foe Anthony Joshua.

Fury said: “When it comes down to it, when I have to pull the chips out, every time I’ve delivered. I can only be the best of my day, I’ve done that: I’m the best fighter in my era.

“I actually feel sorry for all these guys who have had to fight me because I go in the dressing room and I’m not nervous, it’s a boxing fight to me, but they’re fighting the fighter of the generation, that’s for sure.”