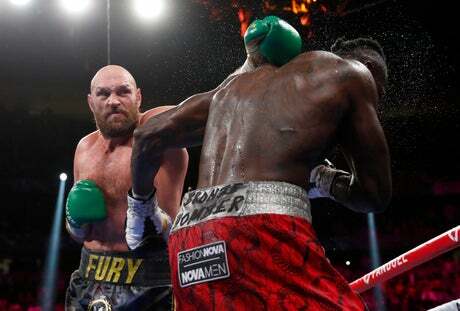 But the Principality Stadium in Cardiff and Old Trafford in Manchester remain the other viable candidates for a second defence potentially in March.

Fury pulled off the first successful defence of his WBC world title in Las Vegas on Saturday night with an 11th-round stoppage of Deontay Wilder and is expected to fight again within the next five months.

The winner of the heavyweight contest between Dillian Whyte and Otto Wallin at the end of the month looks the likeliest option for what is being billed as Fury’s homecoming fight after a lengthy spell boxing in the US.

And his promoter Warren told Standard Sport: “I spoke to him yesterday and he’s flying home today. The main thing for him is to have a bit of time out first and we don’t know exactly what’s next. But what’s important is that he’s in a good place right now after that fight.

“As for what’s next, I would personally like to be back in London. If it’s early spring then I’d like Arsenal but there’s Cardiff and I’m sure Tyson would like Manchester United for the next fight.”

The winner of Whyte-Wallin is seen by the WBC as the next mandatory challenger for Fury’s current belt and, with Anthony Joshua and Oleksandr Usyk also planning to box again in March, the Whyte-Wallin option looks the only realistic one currently.

Fury’s camp had hoped that Joshua – described as a “made-for opponent” for Fury – might duck the Usyk repeat but that rematch clause has been officially exercised with a fight date and venue – most likely also in the UK – currently being sought.

“Tyson would happily fight Joshua but it looks like the Usyk rematch is on,” said Warren. “I don’t see Joshua winning that – it’s Usyk again for me – but that doesn’t mean the Joshua fight can’t happen. It’s a fight people want to see.”

The trilogy fight between Fury and Wilder in Las Vegas was comfortably their best to date, with Fury twice being knocked down in the fourth round before recovering to gain the ascendancy and eventually stopping his opponent.

“I think with that fight and the way he boxed, Tyson transcended boxing,” said Warren. “He’s a global star after a tremendous fight and all credit to Wilder who, despite being a terrible loser, went out on his shield in a brilliant fight.

“Tyson showed some real balls and he put his heart into those two rounds. And what’s funny is that everyone goes on about Wilder as a big puncher and he is but Tyson’s a big puncher too, and has knocked out some serious people.”