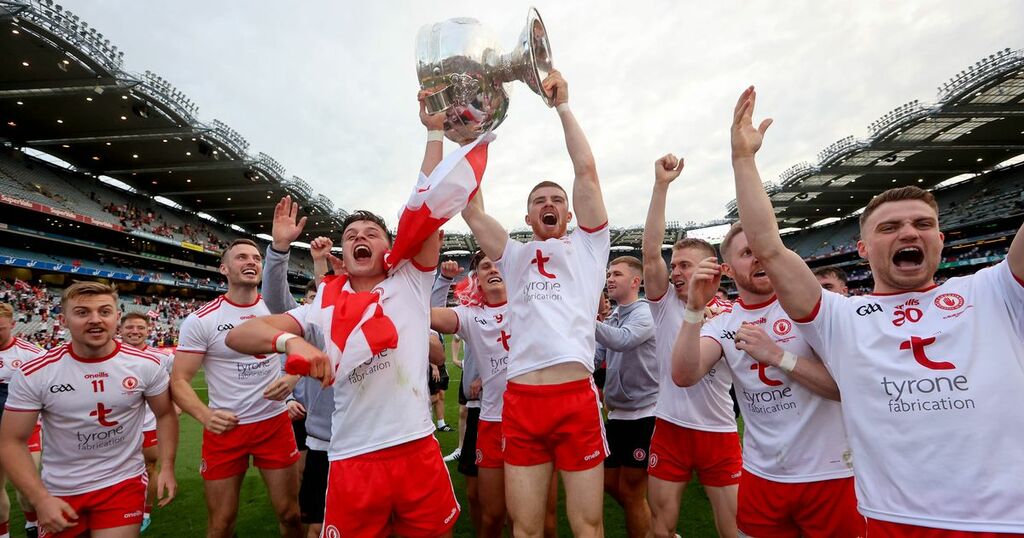 There’s a rich variety to Tyrone’s burgeoning All-Ireland collection, but this one stands out for a variety of reasons.

Twenty-eight days after they rolled the dice and placed themselves on the brink of handing Kerry a semi-final walkover, they’ve been crowned champions again having been widely considered the least likely of the last four to collect the Sam Maguire Cup, even before a Covid-19 outbreak almost derailed their season.

Tyrone enjoyed good fortune over the course of the campaign, particularly in the three games leading to Saturday’s final, any of which might have gone the other way, but, conversely, deserve credit for making the most of the breaks that fell for them.

The circumstances surrounding the postponement of the semi-final against Kerry may leave a sour taste for some but, judging this fourth All-Ireland by their exploits on the field only, the title is well-earned.

They were courageous, hugely energetic and well-organised and while they may not have the attacking class of their three previous All-Ireland winning sides, they were obdurate enough to ensure that any shortfalls in that respect wouldn’t be their undoing.

And there was certainly nothing fortuitous about this victory, which was their most convincing since the opening round stroll against Cavan.

This success further enshrines Brian Dooher’s heroic status in the county as, having been involved in the 2003, ‘05 and ‘08 successes as a player, captaining the latter two, he joins such iconic figures as Kevin Heffernan, Tony Hanahoe, Billy Morgan and Paidi O Se by lifting the Sam Maguire Cup before later leading his county to it in a managerial capacity.

His fellow joint-manager, Feargal Logan, missed the halcyon days of the 2000s but has exercised some demons from the 1995 All-Ireland final defeat to Dublin, when he was in the Tyrone midfield.

Tyrone’s pairing in the middle was seen as their Achilles heel entering yesterday’s final but it turned out to be a foundation for the victory as Brian Kennedy and Conn Kilpatrick ultimately outshone Matthew Ruane and Conor Loftus.

Kennedy put in a big shift while Kilpatrick made a huge fetch ahead of his side’s second goal, which effectively did for Mayo.

The Connacht champions can bemoan Ryan O’Donoghue’s missed penalty in the 42nd minute which, if converted, would have put them in front. Perhaps that would have ignited them but you couldn’t be convinced either.

Their performance was short of what was required for the most part and, while there was certainly no disgrace in this defeat, it was their weakest effort in a final since the implosion against Kerry in 2006.

They started on the front foot and hit the first two points but Tyrone responded with three of their own and were never led thereafter, with Mayo drawing level for what proved to be the last time in the 22nd minute.

Tyrone struck the next three points after that, the last of them a 45 from Niall Morgan after Darren McCurry was denied a goal by Rob Hennelly. But Mayo had the better of the first half goal chances with Bryan Walsh and Conor Loftus both denied in one scramble, while Ronan McNamee blocked an Aidan O’Shea effort with Morgan rushing back to an unguarded net.

Tyrone came out the right side of a borderline penalty call on the stroke of half-time as referee Joe McQuillan awarded a free rather than a spot kick for Kieran McGeary’s challenge on Padraig O’Hora, with Ryan O’Donoghue converting to make it 0-10 to 0-8 at half-time.

Frank Burns was penalised for a pick-up on the goalline early in the second half though O’Donoghue’s penalty grazed the outside the post and you could see it ebbing away from Mayo from there.

Cathal McShane, fresh from the bench, palmed the opening goal after a brilliant delivery from Conor Meyler and though Mayo reduced it to two points, a driving run from Conor McKenna opened it up for Darren McCurry to slap in a second with 12 minutes remaining.

Mayo responded well to that setback initially but it was ultimately too great a blow to absorb as Tyrone kicked three unanswered points to seal it, the last a free from Morgan, who turned in a superb all-round performance.

Ruane saw red early in injury time after clashing with Kilpatrick but the tide had gone out for Mayo at that stage.

And there’s certainly no hard luck story to accompany this defeat, their 11th in a final since they last held the title 70 years ago.