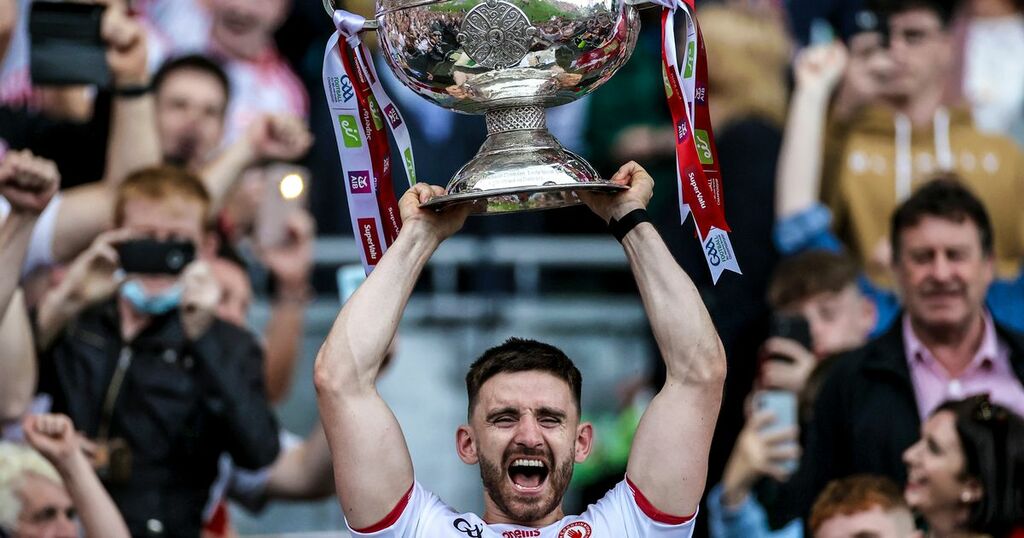 Supersub Cathal McShane palmed home a goal with his first touch after being introduced in the 46th minute, just four minutes after Mayo had missed a penalty through Ryan O’Donoghue which would have put them ahead if converted.

And although Mayo cut the deficit back to two points, a second goal from Darren McCurry in the 58th minute ultimately left them with too much to do.

And yet another miserable final experience was rounded off by Matthew Ruane’s late red card after he entangled with Tyrone’s Conn Kilpatrick.

But while there will be regrets aplenty for Mayo yet again and the penalty miss was a critical moment in the game, they can have little cause for complaint overall as they didn’t bring enough to the table; there was no doubting Tyrone’s superiority over the 70-plus minutes.

The first half was as tense as was anticipated and while Mayo made the more energetic start and kicked the first two points, Tyrone cancelled them out and went ahead by the 11th minute as they settled into the game that bit better.

Indeed, though there was little to choose between the sides, the first half was played more on Tyrone’s terms as it progressed as they hit Mayo effectively on the counter attack, with the Connacht champions having to work harder to eke out a score.

They had the better goal chances, however, with Bryan Walsh denied by Niall Morgan in the 15th minute before Conor Loftus’s follow up was cleared off the line by Niall Sludden.

With Morgan having drifted off his line, Aidan O’Shea almost finished to an empty net in the 27th minute only for afull length block from Ronan McNamee to deny him.

Darren McCurry was Tyrone’s most dangerous forward in the opening half and, after a booming delivery from Morgan latched on to a breaking ball five minutes before half time only for Rob Hennelly to save his effort with reasonable comfort.

Morgans slotted the 45 to give Tyrone a three-point lead for the first time, however, an advantage they retained just before half-time when Kieran McGeary hauled down Padraig O’Hora on the edge on the penalty, with the Ulster champions relieved to concede just a free rather than a penalty.

They had an opportunity to go in front for the first time since the early stages when an O’Donoghue’s free fell short and though there was a strong suspicion of a square ball, referee Joe McQuillan awarded a penalty when Frank Burns picked the ball off the ground in front of the goalline.

Hennelly converted a long range free shortly afterwards to give Mayo some fresh enthusiasm but McShane, just off the bench, palmed home from a superb Conor Meyler delivery.

Mayo kicked the next two points but despite Tyrone going 12 minutes without a score, they made light of that by pouncing for a second goal as a superb fetch by Kilpatrick allowed him to release Conor McKenna, who fed McCurry to slap the ball to the net.

Lee Keegan led the charge and as the deficit was whittled from five points to three but that was as good as it got with Tyrone finishing strongly to condemn Mayo to a second consecutive 2-14 to 0-15 defeat in an All-Ireland final.