Emergency crews have responded to two vehicles that became engulfed in flames in separate incidents on major Hunter roads within five minutes of each other on Thursday afternoon.

Firefighters from East Maitland and Tarro were called to the New England Highway at Tarro about 12.45pm, where they found a motorhome well alight.

The vehicle was destroyed by the fire, which firefighters stopped from spreading.

A woman and a dog managed to escape the blaze uninjured, a firefighter said.

The Tarro fire broke out only about five minutes before a b-double truck burst into flames in a southbound lane of the M1 Pacific Motorway at Morisset.

The driver of the truck, which was carrying a load of steel, escaped the inferno without injury.

Firefighters extinguished the blaze, which briefly caught onto grass in the nearby median strip. 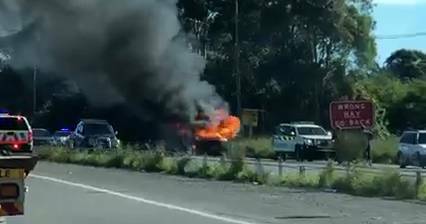 Firefighters attended the blaze on Lowrie Avenue, Penicuik, on Monday afternoon where a vehicle caught fire.