Two New Works Tackle Censorship And The Power Of Speech 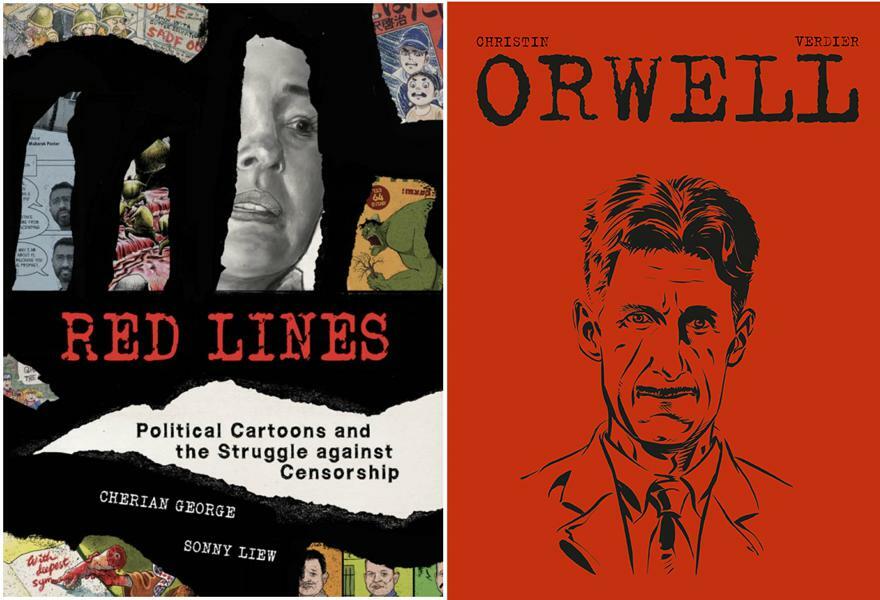 Fake news, gag rules, NDAs. cancel culture, government crackdowns, algorithmic deceptions: It’s as though we live in a world that took George Orwell’s 1948 classic 1984 as an instruction manual for controlling thought and expression. But because people on all sides feel that they, and only they, are the victims of this chill, it’s difficult to find a contemporary analysis of censorship and free speech that does not resort to partisanship and finger-pointing. Now two works of graphic nonfiction released in the last month take on this challenge from two different directions, each with great success.

Red Lines: Political Cartoons and the Struggle Against Censorship by two Singaporeans, Cherian George and Sonny Liew (MIT Press, August, 2021), takes the direct approach. This is a scholarly and systematic look at efforts to suppress political speech in the form of cartoons, drawings and comic strips historically and globally.

As the book lays out in great detail, cartoons have a unique power to get under the skins of authorities, hypocrites and stuffed shirts in all times and all cultures. Because cartoons are so informal and approachable, efforts to censor them appear especially humorless and heavy-handed, which can redound to the benefit of satirists and provoke a public outcry against the oppressors.

Consequently, the efforts to stifle this kind of speech have grown both sophisticated (through invisible means of influence applied to publishers, distributors and consumers of the content) and coarse (violence, repression, and mass murder in the case of the French satirical publication Charlie Hebdo). Red Lines offers vivid examples from around the world indicating the many ways governments, religious authorities, economic interests and others conspire to stifle dissent and silence cartoonists.

The authors, accustomed to the chilly attitude of their home country of Singapore toward speech that violates the “consensus” promulgated by the government, view censorship as anything that impedes the free expression of the artist’s ideas, not just official action. They present examples of subtle intimidation by authorities, commercial censorship (cartoons whisked out of sight by media companies), censorship by technology (either through bloodless algorithms or opaque and unappealable platform policies), the well-meaning censorship of online mobs out to suppress “problematic” expression, and outright violence and intimidation, among others.

Red Lines s not exactly a graphic novel, although there are sections that are done in comics style. It is more of an extensively illustrated textbook, full of word balloons and narrative blocks, charts, clip art, Fumetti-style photo-collages and other graphic elements along with sequential art. Both authors seem comfortable working in this visual format; the two previously collaborated on the award-winning, best selling graphic novel The Art of Charlie Chan Hock Chye and Liew has worked at the highest levels of the American comics business.

All of visual design helps, at least partially, to decompress what is a very dense and academic work (it clocks in at 448 pages). It also carries the point across in ways that plain text could not. Red Lines might not be beach reading, but it surely belongs on the syllabus of any media studies class as it sets the standard for discussion of this topic.

Orwell, a graphic biography of the famed British author by writer Pierre Christin and artist Sébastian Verdier (English edition from Self Made Hero, July, 2021, following a 2019 French release from Dargaud) arrives at largely the same place but takes a completely different path. Orwell famously predicted a world where censorship was so ingrained in the fabric of government and society that any form of critical thinking was viewed as a crime by the totalitarian regime. It is thanks to him that we have the colorful vocabulary for describing modern censorship and the manipulation of perception: Big Brother, thoughtcrime, Newspeak, Room 101, two-minutes hate, and many others.

If history has flattened Orwell into this collection of his “greatest hits,” Orwell seeks to reclaim the legacy of the man through a gripping narrative of his life story. Christin and Verdier explore how Orwell, born Eric Blair, synthesized a range of influences and experiences from his upbringing in the twilight years of the British empire, into the clear-eyed perspective on the dangers of totalitarianism that he exhibited in his masterworks Animal Farm and 1984.

Orwell’s unusual variety of life experiences, from being the “clever poor boy” in his elite British prep school to a low-level colonial authority in Burma to a destitute vagabond throughout the 20s, helped shape a worldview that was able to step outside the frames of class and ideology typical of the era. The final step in his education was his traumatic tenure as a foreign fighter in the Spanish Civil War in the mid-1930s, where he took up arms to defend the left wing Spanish state from a fascist rebellion led by Francisco Franco. Orwell himself survived the experience but his idealism perished on the battlefield; from then on, he recognized that ideologies that elevated abstract theory over ordinary human experience could only lead to oppression, no matter how lofty their stated goals.

For someone as disdainful of comics as Orwell apparently was (he wrote critically about Superman and the superhero genre in the 1930s), he is extremely well-served by the medium in this book. Verdier’s black and white artwork is gorgeously detailed where it needs to be, while telling the story without much fuss and frill. It is especially good at evoking the atmosphere of pre-war Britain and the various physical environments.

Orwell avoids emphasizing its subject’s most famous work; 1984 literally does not appear until the next-to-last page, with an extended quote to give the flavor of the book. However the final section, After Orwell, provides broader context and some incidental overlap with Red Lines in its description of how factions have appropriated some of his passion and critique in service of illiberal agendas stemming from various points on the political compass.

For Orwell, dystopia was a world in which words and meaning have parted company, whether through the explicit work of censors or through the insidious processes of self-censorship, euphemism and intimidation. As Orwell and Red Lines make clear, the courage to stand up to those forces is as necessary today as it was in 1948.