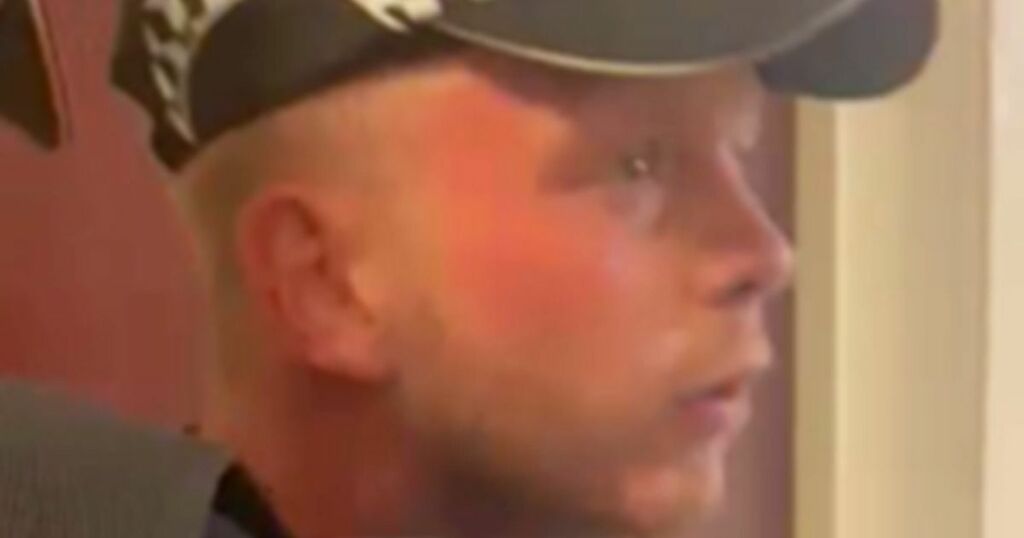 Two men who allegedly posed as police officers to gain entry into a woman's flat while wearing fake uniforms escaped onto the streets of London.

The men - wearing caps, harnesses and carrying batons - told the female resident they were there to search the property in Barking, East London.

Suspicious they were not who they claimed, she asked to see their identification which they failed to produce.

The men, who police refer to as suspects left the property followed by the woman and a man, who accused the pair of trying to burgle their house.

Real police officers were called at 6.51pm on Tuesday to the residential block. The men were followed and fled.

A Met Police spokesman said: "Officers attended and conducted an area search, but the males could not be located.

"It is not believed that anything was stolen from the address and there were no reports of any physical injuries.

"An investigation is ongoing. There have been no arrests at this time."

In a video of the incident, the men, dressed in baseball caps, and lanyards marked “POLICE”, are seen shuffling out of the hallway of the home.

A man and woman, who are believed to live at the property, can be heard confronting the pair from behind the camera for failing to show proof of authority, such as a police warrant card.

One “police officer” replies: “Don’t be aggressive. I don’t need my ID.”

The woman replies “yes you do”, as the other man believed to be her husband adds: “Show me your ID, you f**king came to rob my house.”

At this point the two “officers” retreat from the building, with one pulling out what appears to be an extendable baton.

As the men leave down several flights of stairs one appears to be speaking into his jacket while wearing an earpiece, as if calling for “police backup”.

To which the male resident shouts “Go f*** yourself you mother f***er".

The woman follows the men telling them: “I told you to explain before, you didn’t show me a warrant and you went by force into my house, so you’re running away now. Don’t hide your face.”

When the male resident once again asks for the “police officer’s” ID number, he replies “there’s no number”.

As the residents follow the men onto the street they claim they are walking to their car, once again appearing to call for back-up for an “aggressive” male and claiming that the woman is “stalking” him down the road, before eventually sprinting away.

The woman is heard shouting after them: “Stop hiding your face if you’re the police. Yeh run mother f**ker.”