Two decades after 9/11, China is more concerned than ever about Afghanistan 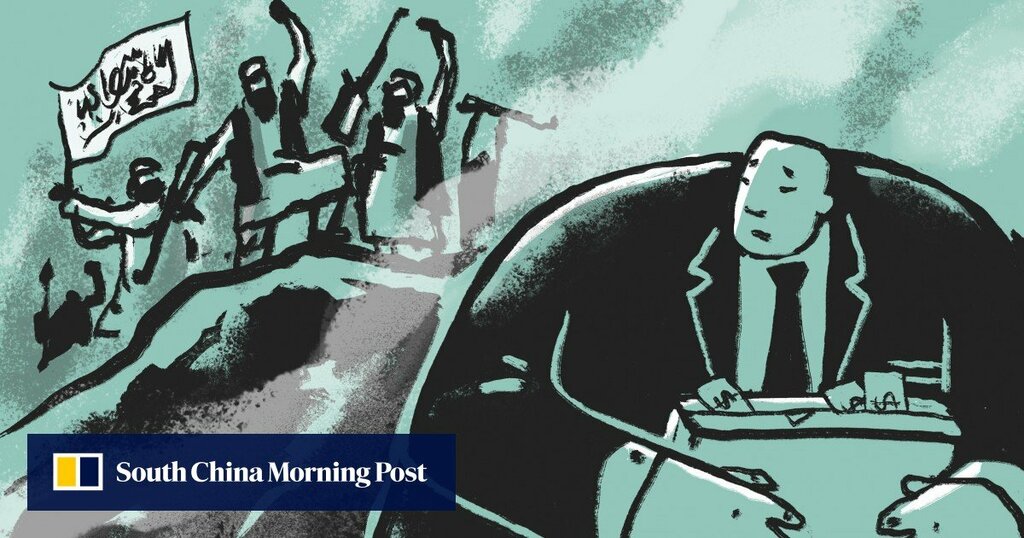 The deadly terrorist attacks against the United States on September 11, 2001, prompted an outcry from around the world: “We are all Americans.” Washington’s policies realigned around fighting terrorism and bilateral relationships strengthened or crumbled depending on where other governments stood. In the seventh in a series about the legacy of September 11, Rachel Zhang looks at why, 20 years after 9/11, Beijing is more worried than before about the situation in Afghanistan.

China’s business community in Pakistan is closely watching developments in Afghanistan, concerned that the chaos could spill across the border and fuel further attacks on Chinese workers.

“Currently most Chinese private traders in Pakistan have gone back, not only because of pandemic concerns but also the unrest in Afghanistan, that may already have worsened the security situation here,” said one businessman, surnamed Peng, who is based in Lahore, the capital of Punjab province.

Peng, 30, has been working with his older brother for the past five years exporting minerals to China from Afghanistan, via the Pakistani port city of Karachi.

His 33-year-old brother returned home earlier this year for personal reasons, but plans to return to Pakistan later this month.

“The security situation in Pakistan has long been a concern, and was getting worse before the fall of Kabul. Terrorist groups have already penetrated into Pakistan,” the elder Peng said. But he added that he and his brother had decided to stay in the country because there was still business potential, as long as the security situation did not get out of control.

Although it is business as usual for now, his brother said he and the other Chinese traders still in Pakistan were trying to reduce “unnecessary travel” as their security worries mount.

Pakistan seeks peace with Baloch rebels, with China and Afghanistan on its mind

“The recent terrorist attacks targeting Chinese people took place in relatively remote areas like Balochistan province, which had no direct impact on us. The province is almost forbidden to foreigners. Even Pakistanis seldom go there because it’s really dangerous,” he said.

“But we are certainly worried about the security situation here, and we are afraid that one day terrorists will come direct to us … If the chaos in Afghanistan further spills over and the situation here continues to worsen, we will definitely consider returning to China.”

Balochistan is a stronghold for various extremist and separatist groups, including Islamic State and the Balochistan Liberation Army. It is also home to the port of Gwadar – a key component of the China-Pakistan Economic Corridor (CPEC), part of Beijing’s flagship Belt and Road Initiative.

Last month, a suicide bombing targeted Chinese nationals in Gwadar, killing two Pakistani children and injuring at least three people, one of them Chinese. The BLA claimed responsibility for the attack.

Pakistan’s Chinese community was already on edge, after a bus blast in July which killed 13 people, including nine Chinese nationals. The bus was on its way to a hydropower project at Dasu, which is also part of the CPEC. The cause of the blast is still under investigation but Pakistan has indicated it suspects a suicide attack.

This sentiment on the ground is echoed in Beijing, which is also concerned that the Taliban’s return to power will lead to a resurgence in regional terror groups and extremist forces that could threaten its growing economic interests in Central Asia.

Beijing also fears the Taliban’s rise could endanger its counterterrorism efforts in Xinjiang, which shares a border with Afghanistan, and has made its support for the group conditional on it fully cutting ties with other terror groups.

The Chinese leadership welcomed the establishment of an interim government in Kabul on Tuesday, describing it as a necessary step to restore order and begin post-war construction.

Beijing also announced a package of humanitarian aid worth US$31 million for the country, and secured pledges from its neighbours, including Pakistan, to share intelligence and crack down on terrorism in the region.

Observers warned that regional extremist forces may become more active, spurred on by the Afghan Taliban’s success. They also cautioned against the idea that Beijing will be able to wield significant influence.

“The victory of the Taliban is likely to boost the confidence of extremists,” said Yan Wei, a professor at the Institute of Middle Eastern Studies at Northwest University in China.

China offers US$31 million in aid to Afghanistan

“The Taliban successfully coming to power more or less encourages extremist forces in South Asia and the Middle East, especially given the fact the Taliban survived and developed under pressure from the US and other Western nations, and eventually toppled the Afghan regime even before the US completed its withdrawal,” he said.

“If the Taliban continues to shelter extremism, it will definitely stimulate the development of it. Other groups in the region may imitate the Taliban’s way of development, which was to use religious beliefs to mobilise marginalised people in rural areas.”

Beijing has long hoped to expand the CPEC – the flagship of its vast outbound investment strategy – into Afghanistan, but has made little progress over the years, due to the volatile situation and its fear that Afghan instability could spill over into Xinjiang.

Last week, Abdul Salam Hanafi, deputy director of the Taliban’s office in the Qatari capital Doha, said in a phone conversation with Chinese assistant foreign minister Wu Jianghao that China’s belt and road programme was “conductive” to the development of Afghanistan and the country hoped to continue to support and participate in it.

But Beijing remains cautious. While it was one of the first countries to engage with the Taliban, China has yet to formally recognise the new government and will be watching closely to see if it keeps its pledge to sever its connections with terror groups.

The Afghan Taliban has close ties with other militant groups and extremist forces in the region, including al-Qaeda and the Pakistani Taliban, also known as Tehrik-i-Taliban Pakistan (TTP).

The TPP evolved from remnants of Afghan Taliban forces which fled to Pakistan after the US invasion in 2001.

After supporting the fight against the former Soviet Union, al-Qaeda was given sanctuary in Afghanistan from 1996. The Taliban later declined to hand over Osama bin Laden – al-Qaeda’s founder – to the US after the September 11 attacks.

Another concern is the wide range of military equipment, including guns, ammunition and helicopters, reportedly captured by the Taliban after the fall of the government in Kabul and the hasty withdrawal by the US military.

Prince Turki Al-Faisal, a former Saudi diplomat, publicly criticised the US for its “bad management” amid fears the weaponry will eventually fall into the hands of regional terrorist forces and fuel their expansion.

“I don’t know which word to use, whether incompetence, carelessness, bad management – it was all a combination of those things,” he told CNBC late last month, adding that al-Qaeda could get hold of these weapons and use them to target Saudi Arabia.

Li Wei, a counterterrorism specialist with the China Institutes of Contemporary International Relations in Beijing, agreed that the Taliban’s victory was likely to stimulate extremist forces in the region.

“We have noticed that after the Taliban seized power, various extremist and terrorist forces have expressed their congratulations to the militant group. Though the Taliban has committed not to allow Afghanistan to become a sanctuary for terrorists again, it remains to be seen to what extent the Taliban is willing to and able to fulfil its commitment,” he said.

“Considering the future development of Afghanistan, the Taliban may be indeed unwilling to allow terrorist groups to use Afghanistan as a hiding place, as they did when the Taliban came to power in 1996, because if the Taliban wants to maintain its regime, economic development is of vital importance, which must be based on safety and stability of the country.”

Huang Minxing, a professor of China’s Northwest University, said the current situation was more uncertain than before, when the US and its allies were cracking down on the Taliban and al-Qaeda.

“China sticks to the non-interference principle and can only see whether the Taliban is able to deliver commitments to have a clear cut with terrorism groups,” he said.

“China is able to offer a big helping hand in infrastructure and investment to rebuild the country, but all of those things will only be realised once Afghanistan is stabilised and the Taliban’s policies meet the expectations of the global community.”

The Taliban has responded to Beijing’s early engagement with a pledge that it will not allow terror groups to use Afghanistan to harm the security of other nations. The group has also suggested that it is seeking to establish a more moderate rule in Kabul.

The Taliban has called China a “friend” and promised to guarantee the safety of Chinese investors and workers, after China’s Foreign Minister Wang Yi invited a delegation of the group to a high-profile meeting in the eastern Chinese city of Tianjin in July. This was followed up last month with a meeting in Kabul between Chinese ambassador Wang Yu and Taliban representatives.

“It’ll be good enough for China if it can keep its own interests from being infringed during the turmoil, and it’s far-fetched to talk about China helping the Taliban become more moderate and rational, as China’s influence on the group is actually quite limited,” said Song Luzheng, an international relations researcher at Fudan University.

“China can only persuade the Taliban from the perspective of its own interests, like it can try to convince the Taliban not to shelter terrorist groups for the sake of the sustainability of its own regime. While it’s true China can also use its economic advantages to exert influence, such influence can’t be overestimated,” he said.

“Besides, China will not establish diplomatic relations with the Taliban regime at least before the G20 summit in Italy at the end of October, as the heads of China and the US may hold their first meeting during G20. And the US will consider it a humiliation if Beijing recognises the regime before that.”