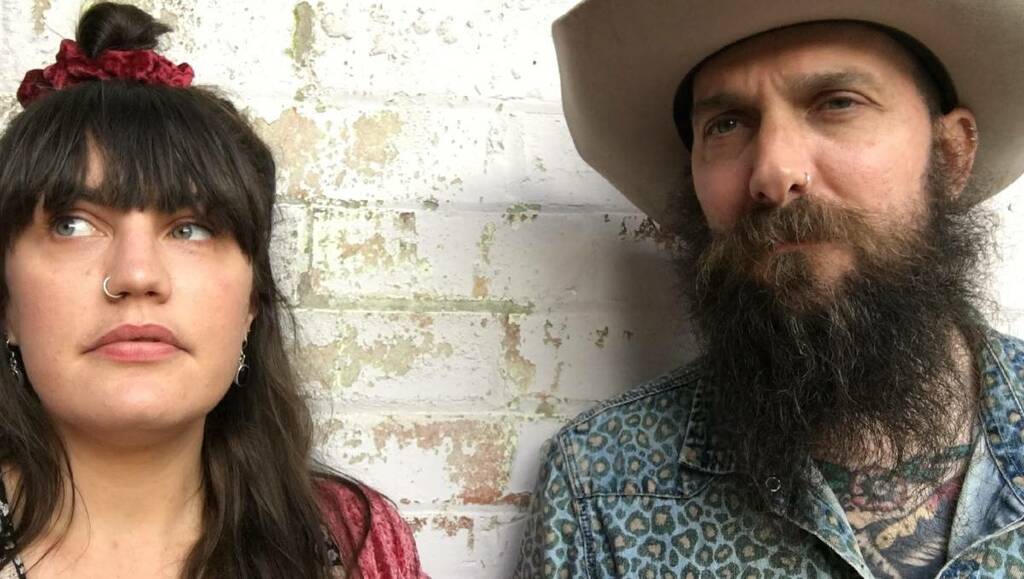 Kristen Lee Morris and Sarah Humphreys are partners in music and life.

Morris made his mark with solo albums Ruins (2014) and Hillbilly Blues (2018) while Humphreys achieved national recognition with four indie-folk albums, most recently Strange Beauty in 2019. But it was when they formed a country-folk duo called Eagle & The Wolf that the magic really happened.

Their sophomore album, Two Lovers, marks an evolution in sound from their 2016 self-titled debut. The heartfelt vocal harmonies remain but the production is bold in its simplicity.

"It was definitely challenging to get this album moving," Morris explained.

"Since our debut we've had a couple of little babies and had to juggle kids and work and music.

"The first batch of songs came together pretty easily when writing together in a little patch when we were at Tamworth. Then we had a few false starts in production. We were phoning it in and we weren't feeling it.

"The real breakthrough came when we decided to record the album ourselves. It gave us the sense of freedom we needed to fall in love with the process again. We recorded most of it at home and also at a little cabin in the mountains our friend let us use."

We made an album that is strange, interesting, flawed, clunky and absolutely beautiful.

These distractions ended up helping the pair to focus on the (comparatively) less stressful task of doing what they do so well - making music.

"We needed the pressure off to allow the magic to come out from hiding," Humphreys said.

"As soon as we did that and made that decision, the songs started pouring out again and they were so easy to record.

"They were mostly first and second takes, capturing a feeling - not perfection. We made an album that is strange, interesting, flawed, clunky and absolutely beautiful."

Two Lovers is a rich tapestry of sounds, voices, instruments and tempos but underlying it all is a rawness that almost sounds like a live recording.

"From a production point of view we had a very, very simple approach," Morris explained.

"Basically every song has a live take as the core of the track - usually a voice and acoustic guitar recorded to one microphone.

"Two Lovers is us both singing and playing live in one take. So everything starts with a live performance and is built up around that. Flaws and all. But you can feel it.

"A lot of it, too, was freeing each other up to do our thing and appreciating those differences.

"You can definitely feel the Sarah parts and my parts on the album. We didn't sand all those parts back - there is dark and light and beauty and grit and it all just sits next to each other."

The second single from the album, Currawong, was written by Humphreys while she was out bushwalking. Morris says he was "blown away by its simple beauty".

"I think that was the very last piece that we recorded before the tracks went off for mixing. The kids were all half ready for school and we set a microphone up in the lounge room and got them to to add some choir vocals to the chorus," he said.

"It was a glorious mess of a morning but we loved having them on the song.

"Because of lockdown we ended up filming the clip for the song ourselves in the bush behind our house. We filmed each other and then Sarah edited the clip."

The pair have adopted a do-it-yourself approach to life and music. For them, it's all about being creative and making connections.

"We are in love with making things and Sarah is ridiculously talented so we just think about what we want to do and we do it," Morris said.

"If you buy something from us we have thought about it and made it and wrapped it and sent it out, usually with a little note or something.

"Our music is about love. We fell in love and our music was a big part of it.

"Stylistically, our music all hangs around a desire for closeness with each other and connecting with our audience. Making people feel something."

Something Good - Eagle & The Wolf

Eagle & The Wolf have shared stages with the likes of The Blind Boys of Alabama, Phil and Dave Alvin, Kasey Chambers, Charlie Parr, Kim Richie, Archie Roach, Katie Noonan and Kevin Bennett. Morris is missing touring but grateful to be spending quality time at home with his family.

"Before COVID I was playing a lot with my band The Dirty Snakes and we had built quite a bit of momentum and we loved it - the brotherhood and the vibes and the good times," he said.

"What I have learnt though is that I was a bit over the top with it - and was missing too much home life.

"I probably would not have stopped so I am thankful for the reboot."

Two Lovers is released on September 17. Singles Currawong and Something Good are out now.