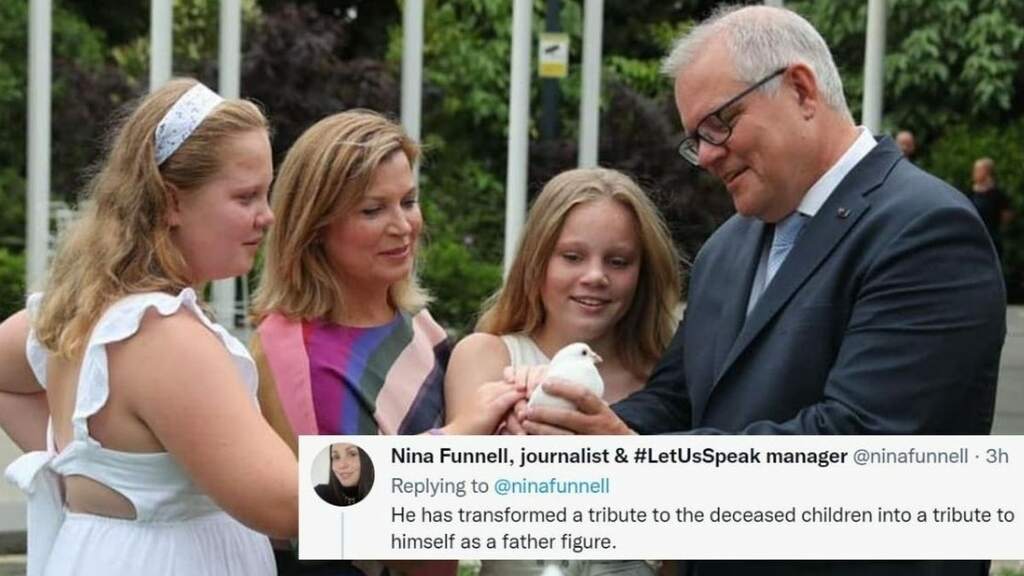 Turns out old mate Scott Morrison used a picture from a memorial event grieving the loss of four children who were killed by a drunk driver to make himself look like father of the year on Father’s Day. Bad optics? From our Prime Minister? Well, I never.

Yep, that post from Morrison, in which he’s holding a dove with his family and talking about the blessings of being a father, was actually taken earlier this year at ‘i4give Day’, an event launched by the Abdallah and Sakr families as a way to cultivate forgiveness and understanding, after their children were struck dead by a drunk driver.

Here’s the post to jot your memory. It’s bad enough that most families couldn’t see each other on Father’s Day, let alone to use a picture from a memorial event to help position yourself in a greater light.

Notice how in the post there is no acknowledgment of the children who passed away, or their families, which is the sole reason that Morrison was even at the event to begin with.

Because Morrison failed to, here are the names of the children who were being honoured by this event, and whose families still grieve: Antony, 13, Angelina, 12 and Sienna, 9 from the Abdullah family, and their cousin Veronique Sakr, 11, who were killed on February 1, 2020.

So it turns out Scott appropriated a photo op which was to mark someone else's DEAD KIDS to make him look good on FATHERS DAY.

Willful centring of his own parent-status.

Instead it's all about him and how grateful he is not to hail from one of those other categories, above.

Sure, he may be thinking that it’s quite a nice picture of Jenny, the girls and a nice little dove to boot, but there was no mention of fathers who may have lost children, the context of the picture, or the names of the deceased children or their families, whose mission of forgiveness led to the pic being taken in the first place.

If you read carefully in the caption, Morrison hints at the fact that the day the photo was taken reminded him of the precious gift of fatherhood, but the context here is incredibly important, and without it, he just appears to be revelling in his fortune.

It’s even worse. The text makes it clear he was aware of the photo’s context & is luxuriating in his good fortune. It’s very much his mindset to elevate himself on the misfortune of others.

I could not believe this when I first saw it. Sadly, it’s real. This is some boss-level sociopathy either by @ScottMorrisonMP if he acted alone, or literally everyone in his office. Did nobody think “Yeah, nah”?

I want to say I’m surprised by all of this, but really, I’m not.

The post Turns Out ScoMo’s Father’s Day Pic Was From A Memorial For Four Kids Killed By A Drunk Driver appeared first on Pedestrian TV.