By Bethan McKernan in Istanbul

An alleged American member of Islamic State, stranded for a second day on the border between Greece and Turkey after Turkey expelled him, is “not our problem”, the Turkish president, Recep Tayyip Erdoğan, has said.

The man, named by the Turkish news agency Demiroren as Muhammed Darwis B, is believed to be a US citizen of Jordanian descent. He was deported on Monday as part of Turkey’s controversial new policy to deport foreign jihadists in its custody.

A Turkish official told AFP that he had refused to be returned to the US and instead asked to be sent to Greece. Athens said he was refused entry when he tried to cross the no man’s land between the two countries to the Greek town of Kastanies. He is reported to have spent the night outside and witnesses said he has been trying to shout to reporters on the Turkish side of the border.

Asked to comment on the reports on Tuesday, Erdoğan said: “Whether [the deported Isis fighters] are stuck there at the border it doesn’t concern us. We will continue to send them. Whether they take them or not, it is not our concern.”

Speaking to reporters in Ankara on Tuesday, Erdoğan threatened that Turkey could release all of its jailed foreign militants and send them to Europe.

“You should revise your stance towards Turkey, which at the moment holds so many Isis members in prison and at the same time controls those in Syria,” Erdoğan said, addressing European countries.

“These gates will open and these Isis members who have started to be sent to you will continue to be sent. Then you can take care of your own problem.”

The Turkish leader’s remarks come in the wake of a fresh push to repatriate some of the 1,200 foreign Isis fighters in Turkish detention centres and 287 captured recently in Syria, including those who have been stripped of western citizenship in an attempt to prevent them returning home.

The interior ministry spokesperson İsmail Çataklı said on Monday one US citizen, believed to be Darwis, had already been repatriated and seven German nationals would be flown home on 14 November. Preparations to deport two Irish citizens, as well as French and Danish nationals, were also under way, he said.

Turkey has not given total numbers and nationalities of those it is planning to send home, or details on how such a policy will work, particularly regarding stateless individuals. Many countries request passenger lists for both military and commercial flights before a plane is allowed to enter their airspace.

Germany’s foreign ministry confirmed that a German citizen had been returned to Berlin from Turkey on Monday, and that a further nine would be deported later this week. The suspects’ alleged links to Isis are still under investigation by Germany.

British diplomats said the policy did not appear to apply to UK citizens in Turkey at this time. Aine Davis, a member of the cell known as “the Beatles”, who beheaded hostages in Syria, is serving seven and a half years in a Turkish prison.

The British woman Tooba Gondal is also believed to be in Turkish custody, having escaped a Kurdish-run detention centre in the chaos caused by Turkey’s invasion of Kurdish-held Syria last month.

While Turkey has quietly deported members of Isis for years, Ankara has now brought the issue to the fore after facing condemnation from European allies over its assault on US-backed Kurdish fighters across the border in Syria, which Ankara considers a terrorist threat.

Turkey was also angered at an EU decision on Monday to impose sanctions on the country over its drilling for gas in disputed Mediterranean waters off Cyprus.

Erdoğan is due to visit Washington on Wednesday, where he is expected to discuss the fate of foreign fighters caught in Isis ranks.

A further 90,000 men, women and children with links to Isis are currently held in Kurdish-run detention centres in Syria. Analysts and military strategists have warned that Ankara’s invasion of northern Syria risks destabilising the detention camps and lead Isis to regroup. 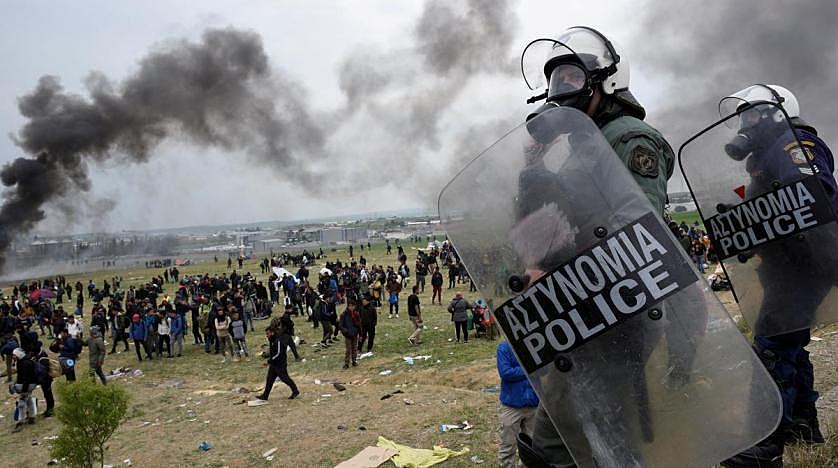 The Guardian - UK
Erdogan: ISIL fighter trapped near Greece 'not our problem'

Turkey will continue to deport captured ISIL members whether home countries 'take them or not', president warns.

Turkish official says seven German nationals will be returned on November 14, according to state media.