Talks between Turkish officials and delegations from Sweden and Finland have made little headway overcoming Ankara's objections to their NATO membership bids, and it is not clear when further discussions will take place, according to two sources.

Swedish and Finnish diplomats met in Turkey on Wednesday in an attempt to appease the NATO member and reach a deal that would allow for a historic enlargement of the Western alliance in the face of Russia's invasion of Ukraine.

Turkey challenged their bid to join on the grounds that they harbour people linked to the Kurdistan Workers Party (PKK) militant group and others it deems terrorists, and because they halted arms exports to Ankara in 2019.

"It is not an easy process," a senior Turkish official told Reuters on Friday, adding that Sweden and Finland must take "difficult" steps to win Ankara's support. "Further negotiations will continue. But a date doesn't seem very close."

A separate person close to the situation said the talks made no clear progress and ended with no timeline to continue, raising the prospect that Turkey may still oppose the membership bids when NATO holds a summit on June 29-30 in Madrid.

Foreign Minister Mevlut Cavusoglu said on Friday that Turkey expects Sweden and Finland to take concrete action and halt such support before it lifts its objections.

Following a meeting in Washington with U.S. Secretary of State Antony Blinken, Finnish foreign minister Pekka Haavisto said it was very important some results be achieved before the Madrid summit.

"We had good negotiations there, long negotiations, agreed to continue those talks, and of course we rely on NATO's open door policy, which is also supported by Turkey. And we think that these problems can be solved," he said of the talks in Turkey.

The Swedish foreign ministry did not immediately reply to requests for comment on Friday.

The two countries have said they condemn terrorism and welcomed the possibility of coordinating with Ankara.

The five-hour discussions on Wednesday were cordial and included separate sessions between Turkish officials and counterparts from the two Nordic countries, followed by three-way talks with all parties, the second source added.

A third source told Reuters that Turkish officials downplayed prospects of reaching an agreement before the Madrid summit.

Neutral throughout the Cold War, Sweden's and Finland's decision to join NATO is one of the most significant changes in Europe's security architecture in decades. Finland shares a 1,300-km (810-mile) border with Russia.

They had hoped it would be a quick accession process that would provide them with the pact's collective-security guarantee, and NATO countries say they will succeed.

But Turkish President Tayyip Erdogan shocked allies by opposing the bids over the presence, especially in Stockholm, of people he said were linked to the PKK and followers of Fethullah Gulen, whom Ankara accuses of orchestrating a 2016 coup attempt.

The senior Turkish official said Sweden and Finland made promises at the talks that should be formalised. The Turks handed their counterparts evidence related to PKK members said to be in the Nordic countries, the official added.

The second source said Turkish officials again raised prospects of extraditions and appeared in no rush to agree a roadmap to a deal.

The chairman of the Swedish parliament's Foreign Affairs Committee told Reuters this month that expelling people not on European Union terror lists was "totally unthinkable".

On Wednesday she had characterised the talks in Turkey as constructive and said they would continue. Erdogan's spokesman, Ibrahim Kalin, had said Ankara observed a positive attitude on lifting the export embargo during the meetings.

Sweden and Finland banned arms exports to Turkey after Ankara's 2019 incursion into Syria against the Kurdish YPG militia. Ankara regards the YPG as identical to the PKK and views both groups as terrorist organisations.

(Additional reporting by Ece Toksabay and Daren Butler in Istanbul and Daphne Psaledakis and Rami Ayyub in Washington; Editing by Catherine Evans and Grant McCool) 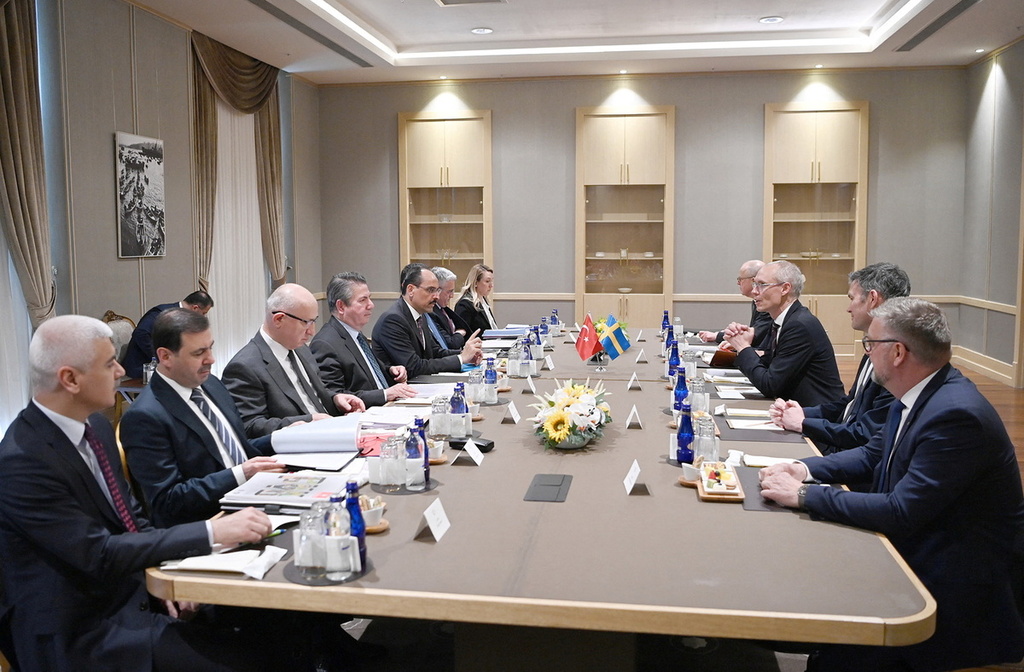 Turkey's talks with Sweden, Finland made little progress on NATO concerns: sources
Talks between Turkish officials and delegations from Sweden and Finland this week in Turkey made little headway overcoming Ankara's objections…

Reuters
One subscription that gives you access to news from hundreds of sites
Delegations from Sweden, Finland Hold NATO Talks in Turkey

Sweden and Finland applied to join Nato earlier this month