Turkey and Greece reel from raging wildfires during heatwave

By Kadir Demir with Will Vassilopoulos in Kourkouloi, Greece

The two regional rivals have been united this week in their fight against disasters that top officials and experts link to increasingly frequent and intense weather events caused by climate change.

Eight people have died and dozens have been hospitalised across the southern coasts of Turkey since the wildfires erupted last week.

The blazes in Greece this week briefly cut off the main road leading to Athens and saw worrying fires break out in Olympia -- the birthplace of the Olympic Games that is usually crowded with tourists -- and on the eastern island of Evia.

"If some people still doubt if climate change is real, let them come and see the intensity of phenomena here," Greek Prime Minister Kyriakos Mitsotakis said while inspecting the ruins where the first Olympic Games where held in ancient times.

The blazes forced also the government of North Macedonia to declare a 30-day state of emergency and the defence ministry in its Balkan neighbour Albania to declare the situation "critical" because of the threat to village homes.

The fires killed one person in Albania this week.

But perhaps the biggest shock came when winds whipped up a flash fire that subsumed the grounds of an Aegean coast power plant in Turkey storing thousands of tonnes of coal.

'Where could we go?'

An AFP team saw fleeing villagers -- some clutching pets they managed to grab from their homes -- piling onto coastguard speedboats at the nearby port as roaring flames lapped the 35-year-old plant in the dark of night.

But a few older locals refused to leave the disaster-hit region even while thousands of others were shuttled out by car or boats racing along the Aegean Sea.

"Where do you want us to go at our age?" asked 79-year-old Hulusi Kinic.

"We live here.This is our home.Our last solution was to throw ourselves in the sea (if there was an explosion), but thank God that did not happen."

Turkish President Recep Tayyip Erdogan's office said an initial inspection conducted after the flames had been doused by the morning showed "no serious damage to the main units in the plant".

An AFP team saw yellow smoke smoulder over parts of the plant on Thursday morning.

More than 110 wildfires have been raging in Greece since Wednesday and nearly 190 have lit up Turkey since July 28 -- more than a dozen of them still active on Thursday night.

The unfolding disasters have seen the leaders of both countries come under pressure from local officials for what they felt was an insufficiently resolute response.

The Turkish mayor of the Aegean town where the power plant caught fire had been waging a tireless social media campaign warning of an imminent disaster.

"We are asking the authorities to reinforce the air and land forces so as not to risk human lives," the mayor of the Evia town of Limni, Giorgos Tsapourniotis, told Greece's ANA news agency.

Erdogan on the defensive

Erdogan has come under especially withering criticism for being slow or unwilling to accept some offers of foreign assistance after revealing that Turkey had no functioning firefighting planes.

The crisis has posed an unexpected challenge to the powerful Turkish leader two years before he faces an election that could extend his rule into a third decade.

Erdogan tried to mount a political counterattack in a television interview Wednesday that began just as news broke that the fire had reached the Aegean power plant.

"When fires break out in America or Russia, (the opposition) stands by the government.We don't have this," Erdogan said.

The prosecutors' office also launched an investigation into social media posts about the fire that were "trying to create anxiety, fear and panic in the public, and to humiliate the Turkish government". 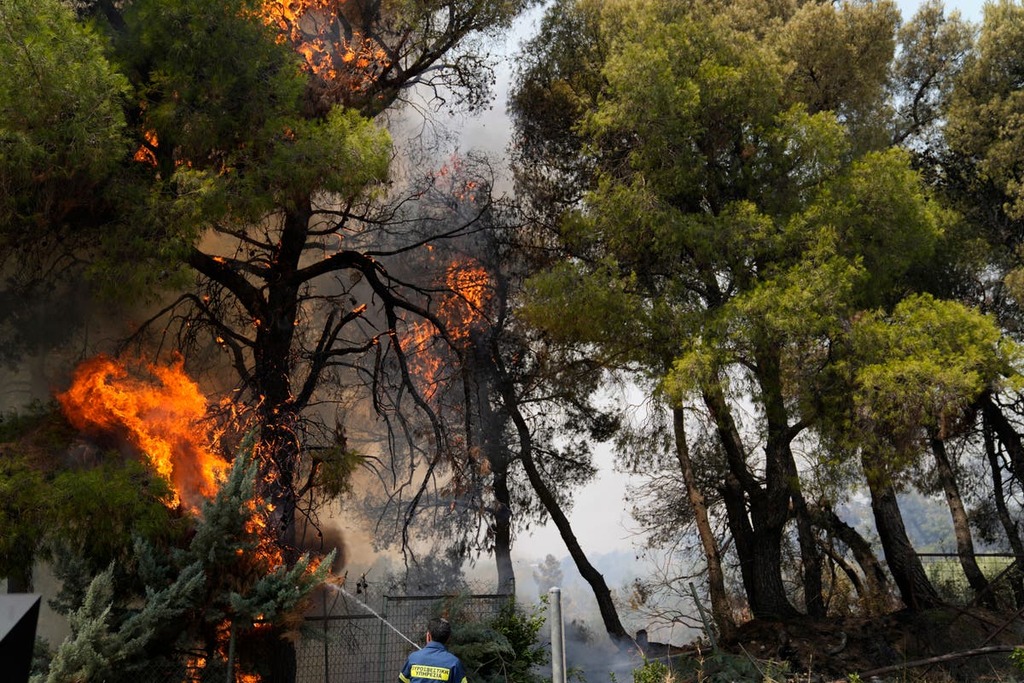 Greece fires: Thousands evacuated from Athens suburb as wildfires rage amid worst heatwave in 30 years
More than 40 fires are burning across Greece, write Marina Rigou in Athens and Nikolia Apostolou in Kalamata

Kyriakos Mitsotakis says the worsening situation in Greece is "the reality of climate change", as firefighters battle to save a…