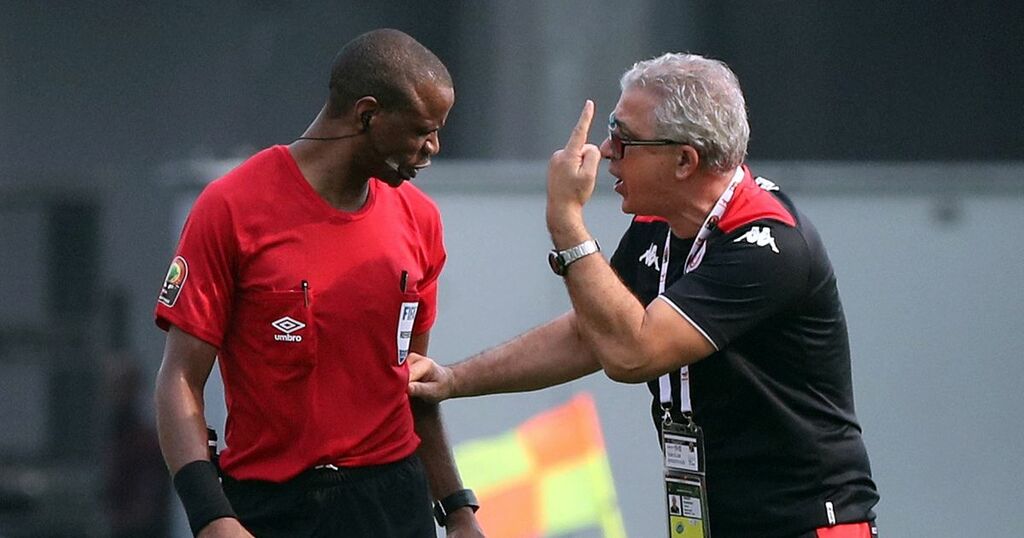 The Africa Cup of Nations match between Tunisia and Mali was thrown into chaos in the closing stages, with referee Janny Sikazwe blowing for full-time before the 90 minutes were up....twice!

Sikazwe, from Zambia, first blew the final whistle with 85 minutes on the clock, only to return to the field to play out the closing stages.

But, after sending off a Tunisia player, he then ended the game for a second time with the clock STILL yet to hit 90.

Remarkably, the Mali players were called back onto the pitch more than half an hour after the full-time whistle was blown, with suggestions they would be required to play out the final three minutes of the game after the error.

But the result was confirmed when Tunisia did not return to the field.

The late chaos capped off a game full of drama at the continental tournament, with both teams being awarded a penalty and Mali substitute El Bilal Toure being shown a straight red card.

What has been your stand-out moment at AFCON so far? Let us know in the comments section

After a goalless first half, Ibrahima Kone put Mali ahead from the penalty spot just moments after the restart.

Tunisia were presented with a golden chance to equalise 15 minutes from time, with Moussa Djenepo adjudged to have handled in the penalty area after a VAR check.

However, former Sunderland midfielder Wahbi Khazri saw his spot-kick brilliantly saved by Ibrahim Mounkoro and Mali held out for the win.

The real controversy didn't begin until the final stages, though, with the referee kicking off the confusion by blowing for full-time five minutes before the end.

Shortly after the players returned to the pitch, Mali's Toure was shown red for a foul on Tunisia defender Dylan Bronn.

VAR called the official to take a second viewing and informing him that he may have made a mistake - only for Sikazwe to stick with his original decision.

Following that, and despite the delays, the referee blew for full-time for the second time with more than 10 seconds of the 90 minutes remaining.

Tunisia manager Mondher Kebaier was furious with the official, running onto the pitch and pointing angrily at his watch after his team's defeat was confirmed.

Mali had begun their post-match media engagements when they were told they needed to change back into their kit and return to play a further three minutes - with the fourth official taking charge rather than Sikazwe.

Eventually, the players did retake the field, only for Tunisia to not return. The game was subsequently ended for a third - and what Mali will hope is a final - time.

It has been reported that Tunisia refused to return to the field believing that, if the game wasn't completed, a potential rematch could be in store.

The official match report on the CAF website largely glossed over the controversy, except for in its penultimate paragraph:

"The end of the match was marred by the controversial decision of the match referee to put the game off seconds before the end of regulation time. The Malians returned to the pitch to play the remaining time, but the Tunisians preferred not to return to immediately look into the next match."

Article 82 of the AFCON regulations states: "If, for any reason whatsoever, a team withdraws from the competition or does not report for a match, or refuses to play or leaves the ground before the regular end of the match without the authorisation of the referee, it shall be considered loser and shall be eliminated for good from the current competition."

It is unclear, at this stage, whether the regulations will be upheld or any punishment handed out to Tunisia in this instance as the referee had already called time on the fixture twice.