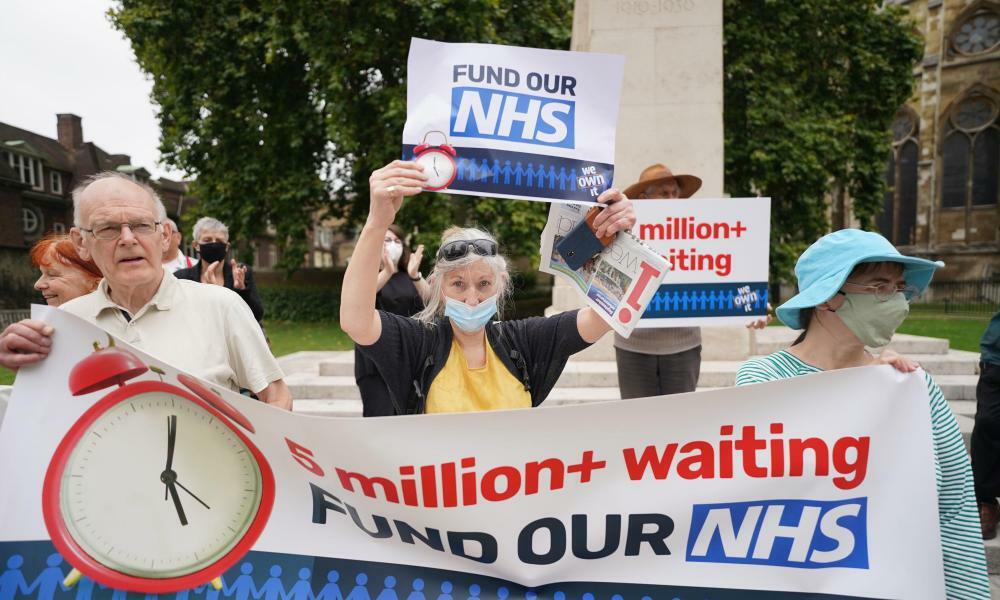 Hello, Warren Murray welcoming you to the Briefing, where my time spent is your time saved.

Sajid Javid has urged patients stuck on lengthy waiting lists not to go private, insisting “the NHS can manage it”. Speaking to the Guardian as he marks 100 days in the post, the health secretary declined to say when the backlog would be cleared but going private was “not certainly something I would be recommending to anyone … The NHS can manage it.” The Institute for Public Policy Research thinktank has suggested eliminating the cancer care backlog could take more than a decade. Jon Ashworth, the shadow health secretary, has said long waiting lists pose the danger of leading to privatisation of the NHS, as patients desert it in favour of private providers.

As well as dealing with the legacy of the coronavirus crisis, Javid said he wanted to tackle the inequalities that mean healthy life expectancy is 20 years higher in Richmond upon Thames than Blackpool. The commitment comes as the Health Foundation thinktank and the Association of Directors of Public Health (ADPH) point out that the public health grant has been cut by 24% in real terms per capita since 2015-16, equivalent to £43 a head in Blackpool, for example. Jim McManus from the ADPH said: “Investing in local public health is critical to levelling up, preparing for the future threats and building a more prevention-focused health and care system.”

‘Big problem’ – Facebook and its other apps Instagram and WhatsApp have been coming back online after one of the worst outages in the group’s history. For a while there, everyone was back on Twitter. The trouble began about 5pm UK time on Monday and went on into the night. A network routing problem originating inside Facebook was eventually pronounced as the cause. Renee Murphy, a tech industry analyst, said it was still a “big problem … This is not something that should ever happen at a company this sophisticated with this much data.” On Sunday, whistleblower Frances Haugen accused Facebook in a major TV interview of putting profit over public safety. Shares were down 4.9% in Monday afternoon trading and CEO Mark Zuckerberg’s net worth fell by more than $6bn, Bloomberg reported. Haugen is due to address US lawmakers in Washington on Tuesday.

Serial killer inquests begin – The delayed inquests into the deaths of four young men who were victims of the serial killer Stephen Port open on Tuesday. Anthony Walgate, a 23-year-old fashion student from Hull, Gabriel Kovari, 22, originally from Slovakia, Daniel Whitworth, 21, a chef from Kent, and Jack Taylor, 25, a warehouse supervisor from Dagenham, east London, were killed between June 2014 and September 2015.

Port, now 46, was found guilty of their murders and sentenced to a whole-life order in November 2016 at the Old Bailey in London. His trial heard the former chef drugged and raped the men before dumping their bodies near his flat in Barking, east London.

‘Prolific offenders’ – Protesters disrupting motorways would be prevented from travelling around the country under new powers Priti Patel wants to give the police. In a move that will anger civil liberties groups, the home secretary will foreshadow criminal disruption prevention orders to halt movement of “prolific offenders”. At the Conservative conference she will also outline a new offence of disrupting critical national infrastructure – stopping protesters from targeting power stations, media organisations or airports. In recent weeks the home secretary has applied for court injunctions to stop Insulate Britain campaigners from bringing motorways to a standstill. The climate activist group is into the fourth week of its campaign for government action on home insulation.

History’s greatest carbon emitters – Analysis of the total carbon dioxide emissions of countries since 1850 has revealed the nations with greatest historical responsibility for the climate emergency. Out of the top 10, six – including China, Russia and Brazil – have yet to make ambitious new pledges to cut emissions before the Glasgow climate summit next month. The UK is eighth and Canada is 10th. The US, Germany, Britain and Canada are the only top 10 nations to have made pledges of deeper emissions cuts. The analysis came as Boris Johnson confirmed plans to decarbonise the electricity grid by 2035 – quite the job ahead, as Britain is still sourcing almost 40% of its power from fossil fuels.

Dose of good news – Two doses of Pfizer vaccine are highly effective at preventing hospitalisation from Covid-19 for at least six months, a large-scale study shows. Effectiveness against catching Covid falls from 88% within a month to 47% after six months, but effectiveness against ending up in hospital remains high at 90% overall, across all variants including Delta. The results underscore the importance of improving vaccination rates globally, researchers say. In the UK, the NHS is offering booster jabs if you had your second vaccine at least six months ago; are living in a residential care home for older adults; are over 50; or are a frontline health and social care worker. It is also offered to 16 to 49 year olds who are at higher risk of severe Covid or live with someone else who is.

Fresh questions for the Conservative party after it emerged one of its major donors was involved in the structuring of a telecoms deal later alleged to be corrupt.

The photographer Martin Parr toured the four Grand Slam tournaments shooting thrilled fans instead of sweaty stars. He talks about why street photography is becoming impossible – and life after his cancer diagnosis.

Sometimes you don’t know how to speak,” Siya Kolisi says simply as he reveals his often hidden struggle to cope with a life that has been challenging and extreme. South Africa’s World-Cup winning captain discusses losing himself in alcohol and strip clubs, seeing his mother’s face change from repeated beatings, and his dream of emulating Richie McCaw. At Anfield, in the 76th minute of Liverpool’s 2-2 draw with Manchester City, there was a familiar sense of one player in red operating under a different gravity. The extraordinary talent of Mohamed Salah is difficult to quantify and the club must decide how much they want to keep the Egyptian star.

The ATP has announced it will launch an internal investigation into allegations of domestic abuse against the Olympic champion Alexander Zverev by his ex-girlfriend Olga Sharypova. The England and Wales Cricket Board has warned counterparts in Australia that the Ashes tour is not a done deal as it pushes to secure the best possible conditions for the players. Marta Bastianelli sprinted to a first-ever stage win in the Women’s Tour of Britain in Banbury, as a last-gasp breakaway was reeled in after attacking on the final climb of stage one, to Sibford Ferris. Bubba Wallace became just the second black driver to win at Nascar’s top Cup Series level when rain stopped Monday’s playoff race at Talladega Superspeedway.

Shares have fallen in Asia after a broad slide on Wall Street led by technology companies. Tokyo’s Nikkei dropped 3%, while oil prices edged higher. Futures trading predicts the FTSE will open 20-30 points higher, though, while the pound is worth $1.359 and €1.171 this morning.

The Guardian leads this morning with more from the Pandora papers investigation: “Tories under pressure to return donations”. The i keeps the pressure up on the Met with the government minister Kit Malthouse saying police vetting is “not fit for the 21st century”. The Times has “NHS bosses face sack for failing to cut waits” – it also says just 27 drivers from the EU have applied to come over and drive HGVs. It’s almost as if people from the continent had been made to feel unwelcome in Britain …

The Mail leads with “PM to tell Britain: get back to work” as in back to your desk. The Telegraph reports on Conservatives deflecting blame for the supply chain crisis: “Business ‘drunk on cheap labour’” is the headline. The Express has “Rishi lays down the law: no more debt”. The Mirror says “That’s Rich” and calls Sunak the “heartless chancellor” for refusing to keep the universal credit uplift.