TS to file review over verdict on immersion 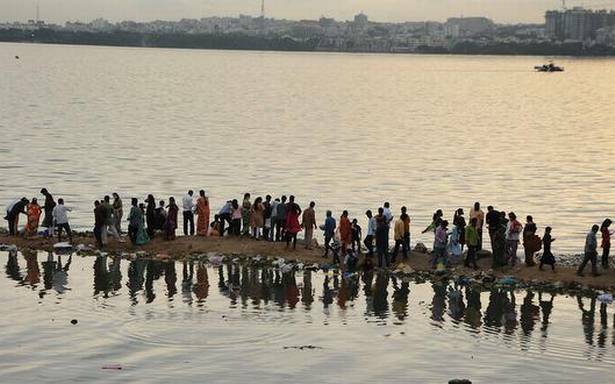 The Telangana government will file a review petition on Monday against the verdict of the High Court banning immersion of Ganesh idols made of plaster-of-paris in Hussainsagar.

The government will appeal to the court to allow immersion as usual this year as it was not possible to construct separate ponds for the purpose right now which was directed in the verdict, Animal Husbandry Minister T. Srinivas Yadav told media persons when he offered prayers at the mega Ganesh idol at Khairatabad on Sunday.

He recalled that about 35,000 Ganesh idols of plaster-of-paris had been installed in GHMC limits. It was not possible to create alternative water bodies to Hussainsagar for so many idols at short notice. Keeping the religious sentiments of people in mind, the government would appeal to the court to allow immersion in Hussainsagar with a broader perspective.

The people had been participating in government-enabled festivals in a grand manner after the formation of Telangana state. It would be no exception when the immersion procession was held with participation of lakhs of people. Hyderabad had earned a special reputation for the occasion countrywide, he said.

The Minister assured that the government would take all precautions to check environmental issues on account of dumping of large quantities of plaster of paris in the lake. The debris would be cleared from the lake within 48 hours.