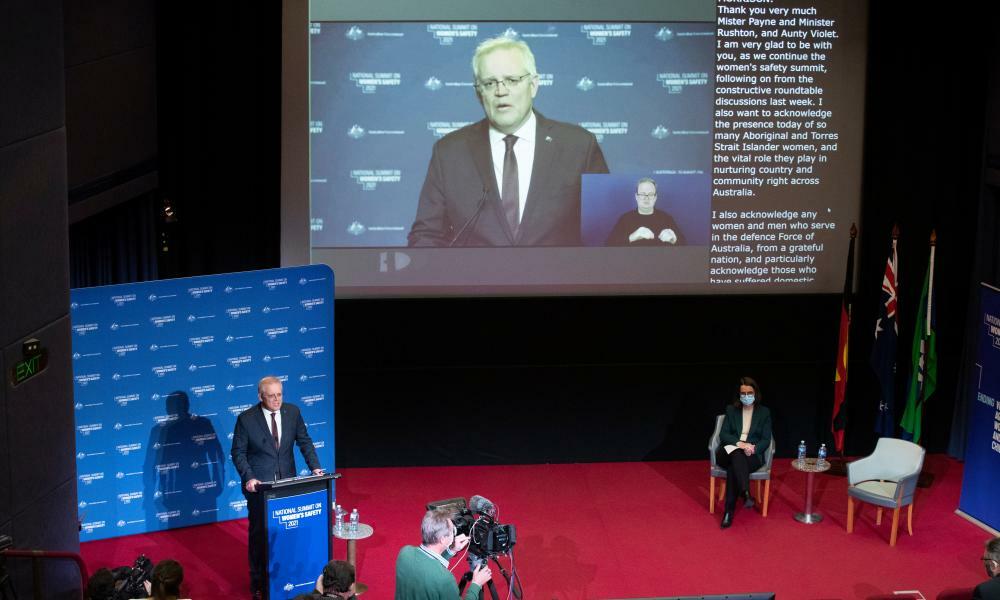 I know there have been abundant outrages this week, and we’ll get to them. But let me start with something electrifying before we pilot towards dispiriting.

Political reporting can be like battling chronic low-level tinnitus. In my job white noise is deployed so people lose their bearings. But Thelma Schwartz, the principal legal officer at the Queensland Indigenous Family Violence Legal Service, burned through the fog. Schwartz began her contribution to this week’s National Women’s Safety Summit by acknowledging her ancestors, the “women who came before me, who laid the foundations for me to be here as an Indigenous woman, as an Indigenous lawyer”. The preamble was about more than referencing country and kinship. Summoning the past surfaced an intergenerational struggle to get a seat at the table. “Aboriginal and Torres Strait Islander women and children have not been seen – they have been silenced”.

Schwartz noted that summits like the one she was participating in carried the risk of co-option. “I refuse to be used as a tick and flick measure,” she said – not when Aboriginal women were 32 times more likely to be hospitalised due to family violence, 10 times more likely to die due to assault, and 45 times more likely to be victims of violence. Not when she was aware of cases in remote communities where young children, victims of sexual assault, had to “wait, untouched, unshowered, because there was no paediatric specialist to undertake the forensic intimate service”.

“So for those politicians who speak and say we’ve got this great spread [of services], it covers all of this and that, with respect, it doesn’t,” she said. “You cannot ever excuse to me children who have been victims of sexual assault waiting for specialist service providers to be flown in to conduct those assessments”.

Schwartz referenced Scott Morrison’s keynote address when he’d foreshadowed the necessity of change, asking if not now, then when?

Schwartz asked everyone present: when are we going to stand up?

When is this going to change?

Bearing witness to people opting out of their responsibilities, in a crisis that is life and death, casts a long shadow

Her righteous shirt-fronting pointed to a deeper inquiry about intention. Are political leaders capable of change? Do they want to change? Those kinds of human conversions, from being deficient to being present, from avoidance to leadership, are substantive, soulful, searching. They are not tick and flick. They require deep reflection, humility and listening.

So this was a powerful intervention. It rang like a bell.

But when the summit got choppy, when women used the microphones they had been given, or spoke their truth without waiting for an invitation, the government’s tolerance for introspection looked thin.

Irritation bubbled to the surface.

Morrison counselled that more would be achieved if everyone could acknowledge everyone was “trying to do our best” – and the minister for women, Marise Payne, was thin-lipped by the end of proceedings.

Now I felt a bit sorry for Payne, because some of the Blokes Who Know Best that she works with, even in the Age of Brittany, would have taken some persuading that women’s safety needed a summit.

Perhaps she was imagining the I told you so’s – the retributive post-summit huddle in the cabinet anteroom. Women: who can please them?

So uncomfortable, I get it.

But people who have seen the worst of humanity and have not been broken by it; people who have glued themselves back together and found the fierceness and the clarity that comes from suffering and surviving aren’t afraid of the paper tigers of politics.

It’s safe to say that people with real problems have a very low tolerance for politicians feigning helplessness while battling varying degrees of Stockholm Syndrome. Sadly for Payne, trying to navigate busted ecosystems, working politely within the rules of engagement, isn’t likely to draw rapturous applause when what’s needed is a revolution that puts the basic human rights of women and children at the centre of the enterprise.

To be fair, there were some hints of progress out of the summit. The government accepted First Nations people would need their own plan to improve women’s safety, and the government will continue to march towards new initiatives.

But we also got a shovel-load of passive aggression and self-pity – and not just on women’s safety. Morrison wasn’t happy about having to explain why it was OK for him to take a Father’s Day trip to Sydney at a time when Australians in the locked down states haven’t seen their fathers for months. He thought there had been low blows and cheap shots.

Then there was Pfizer. A freedom of information request from Labor suggested the government had hastened slowly in locking in vaccine supplies. This was very obviously a cock-up. But Morrison was inclined to forgive himself while nudging health minister Greg Hunt ever so gently in the direction of a passing bus.

When the prime minister was called to account for his actions on Thursday he said the government pursued a strategy of “sovereign manufacturing vaccine options for Australia” rather than relying on big pharma executives in the northern hemisphere. Morrison said even if the government had sent a decision-maker rather than a public servant to the meeting referenced in the FoI documents, Australia still wouldn’t have got any doses before about now.

When asked what he had done, as opposed to Hunt, Morrison said “you’d have to speak to the health minister about that”. When pressed about when he met Pfizer representatives, Morrison used indirect language. “I would have been talking in the second half of last year”. Pressed again: “What efforts did you make to get more than those 10m [doses]?” Morrison reverted to the general: “Every effort that we could”. Pressed again, “In what way?” Morrison then brought the inquisition to a halt. “No, I’ve answered the question”.

Morrison then declared anyone who insisted the government had a case to answer was a “hindsight hero”.

The main problem with Morrison’s rationalisation, apart from the blatant self-interest, was the sheer abundance of foresight heroes.

Experts did tell the government, both privately and publicly, to diversify the vaccine purchasing strategy. Not only was that prescient advice not followed, Australians also had to endure the whole “front of the queue” malarkey that preceded the “not a race” malarkey before the hardships of the winter closed in.

Implicitly, Morrison’s preferred test for his Pfizer fail (as it was with the women’s summit) is everyone is trying to do their best.

Conceptually, this might be a starter (given politicians are human, and the times are complex and difficult) if the government ever showed either the barest hint of remorse, or any sustained interest in learning from past mistakes. Instead we endure these cycles of self-exoneration and thin-lipped irritation. Why are people so mean to us?

This dispiriting phenomenon reached its zenith on Friday when Gladys Berejiklian sauntered into her daily press conference and told reporters it was time for her to stop fronting for questions at 11am because it was now time to live with Covid. The premier had a real job and these inquisitions were inconvenient.

She informed reporters: “I’ll turn up when I need to”. Sorry, what? Who determines need in this scenario? I understand that leaders will have to normalise their communications at some point. But normalising just ahead of the peak of the Delta outbreak, hanging back while the health officials take the heat, speaks to a need that isn’t instinctively democratic.

At one level, this hiding makes little practical difference. In more than two decades on the job, I haven’t seen a politician more disinclined to answer basic questions than Berejiklian. It takes a particular kind of arrogance to be as impervious to scrutiny as this New South Wales premier is.

I assume Berejiklian’s oversized confidence stems from the tactical supposition that Labor, courtesy of its shabby indulgences and periodic malfeasance in New South Wales, is not much of an opposition, and from the knowledge that voters loathe carping journalists as much as politicians. So what if the puffed-up bloviators bitch? Cry me a river.

This kind of cynicism is enraging.

Living in close proximity to political actors thumbing their noses at basic norms, like accountability; having to coexist with leaders who feel no significant pressure to punctuate their constant spamming with competent representation or deep engagement or self reflection; bearing witness to people opting out of their responsibilities in the middle of a crisis that is literally life and death – casts a long shadow.

This behaviour is beyond obnoxious, beyond unacceptable, beyond tolerable.

It is a disgrace.